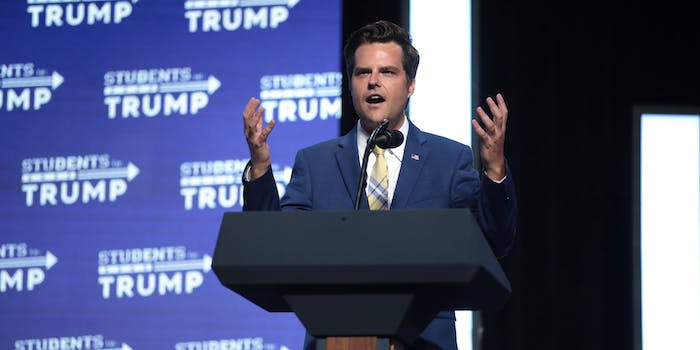 ‘There’s no age that you can’t be sexy’: A look at Matt Gaetz old behavior in light of trafficking report

He was only 'no' vote on human trafficking law and once said Epstein shouldn't be re-arrested.

On Tuesday, the New York Times reported that Rep. Matt Gaetz (R-Fla.) is the subject of an investigation into whether he trafficked a 17-year-old girl with whom he was having a sexual relationship two years ago.

Gaetz denies the accusation and claims that he’s the victim of a criminal extortion attempt masterminded by a former Justice Department official.

That official has said that Gaetz is trying to distract from his impending indictment, the Daily Beast reports.

The scandal has cast new light on Gaetz’s track record related to sex.

He’s been accused of creating a sex game with points for sleeping with staff when he was in the Florida legislature, which he denies. Gaetz also argued against investigating the prosecutor behind pedophile Jeffrey Epstein’s plea deal.

He often makes jokes about sex. Once he suggested changing Florida’s welcome sign to, “There’s no age that you can’t […] be sexy.” His legislative history on the subject of sex crimes has been a source of controversy.

He also once joked about having a “fifth-grade girlfriend.”

Evening seemingly innocuous pictures and posts from his appearances at Florida high schools, which he calls “Open Gaetz Days,” have been turning heads in the last 24 hours.

Where Matt Gaetz goes, the subject of sex often follows.

Since the news broke on Tuesday, questions have resurfaced about his lone vote against a federal human trafficking law in 2017.

The law created a human trafficking prevention coordinator at the U.S. Department of Justice and established a committee to develop best practices to combat trafficking.

Some are now pointing to this vote as cause to strip him of his Judiciary Committee assignment until the investigation concludes.

This isn’t the only time Gaetz has gone against the grain in subjects related to sex.

He’s defended fellow lawmakers caught up in their own sex scandals and blasted the likes of Barstool Sports for sexism.

Less admirably, in 2019, Gaetz was one of the only people who opposed investigating the sweetheart plea deal then-Labor Secretary Alex Acosta gave Epstein when the former was a federal prosecutor.

While other Florida Republicans supported the investigation, the Miami Herald reported that Gaetz thought it would set a “dangerous” precedent.

Gaetz has other interesting opinions about the Epstein case.

On his podcast last summer, Gaetz suggested that Epstein and his alleged accomplice Ghislaine Maxwell were conspiring with foreign and domestic intelligence to set up powerful men who they provided with young girls for sex.

“This was not about sex with Jeffrey Epstein and Ghislaine Maxwell. This was about power. And this was about leverage,” Gaetz said.

He said that Epstein set powerful men up to get tapes of them having sexual relations with young girls. This, he believes, may be part of a massive conspiracy

Somewhat similarly, Gaetz has said that he’s now being set up in an effort to extort and smear him. And he says this isn’t the only such attempt.

In a bizarre appearance on Tucker Carlson’s show Tuesday night, he said that people falsely claim to have photos of him with child prostitutes.

Oddly, this was the first time anyone heard anything about pictures of him with prostitutes.

Some may also consider it ironic that Gaetz sponsored a 2014 bill that made Florida’s sex offender laws among the strictest in the nation.

The law doubled the penalty for sex crimes against children younger than 12, made indecent exposure a felony, eliminated reduced sentences for good behavior for sex offenders, and made it illegal for sex offenders to possess pornography.

It also made it possible for sex offenders to be confined indefinitely irrespective of their sentence.

“We know one certain fact,” Gaetz reportedly said on the Florida House floor. “No one has ever raped a child while sitting in state prison.”

On Twitter and in the press, Gaetz often shares his thoughts on matters related to sex, including scandals and crimes like human trafficking.

Sex, and sex trafficking, it seems, is never far from the mind of Matt Gaetz.