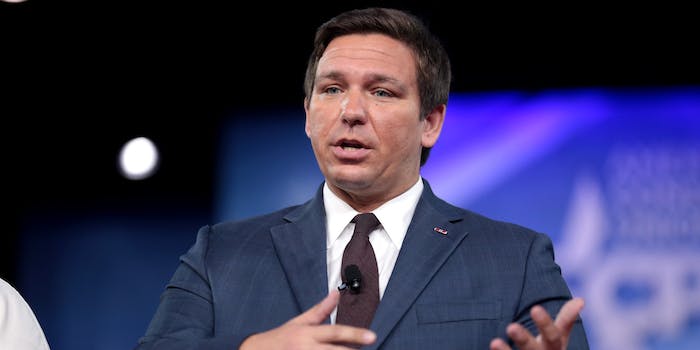 Legal experts argue that the new law will almost certainly be challenged in court.

A new law passed in Florida on Monday will allow the state to fine social media companies that ban political candidates.

Signed by Gov. Ron DeSantis (R), the law is aimed at keeping sites such as Facebook and Twitter from removing candidates running for state office.

Specifically, the law makes it illegal to ban a candidate running for statewide office in Florida for more than 14 days. Platforms that do not comply can face a $250,000 per day fine.

DeSantis further argued that the law, which was introduced following the removal of former President Donald Trump from multiple social media platforms in January, guarantees “protection against the Silicon Valley elites.”

“If Big Tech censors enforce rules inconsistently, to discriminate in favor of the dominant Silicon Valley ideology, they will now be held accountable,” DeSantis said in a statement.

Over 100 similar bills have been introduced across the country, according to the New York Times, since Trump was banned in the wake of the Capitol riot.

Most of the legislation, which specifically targets the moderation practices of social media companies, has thus far failed. One proposal in Texas, however, is currently being debated.

The Florida law also bars social media sites from banning or prioritizing certain media outlets. The section is believed to have been spurred on by Twitter’s actions against the New York Post over its coverage of Hunter Biden’s alleged laptop.

Not only that, the law demands that social media platforms be more transparent about its moderation practices and even lets users sue if they feel they were unfairly targeted.

But it remains unclear how exactly the law will work in practice given Section 230 of the Communications Decency Act, which protects social media companies from being held liable for content posted by its users.

Questions have also been raised over potential First Amendment violations given that the law would dictate how tech companies choose to moderate their platforms.

Experts argue that the law will almost certainly be challenged in court as a result.