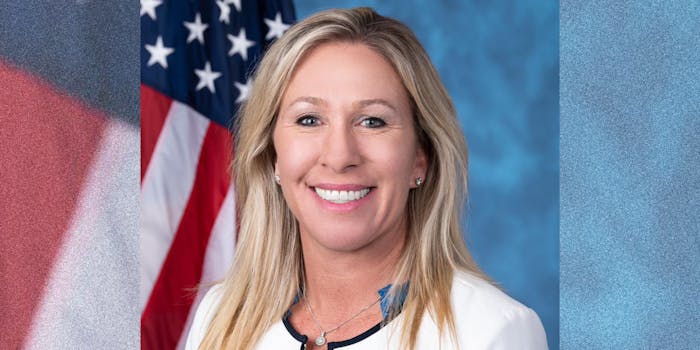 Greene's office says her account was locked for unspecified violations.

Drama is the oxygen that sustains freshman Rep. Marjorie Taylor Greene (R-Ga.). In the wee hours of Friday morning, Twitter delivered the QAnon-touting congresswoman a fresh tank in the form of a temporary suspension.

According to a press release from Rep. Greene’s office, around 1:00am ET she received an email notifying her that her personal account was being locked for unspecified violations of Twitter’s policies. She would be able to view tweets and send direct messages, but not tweet or like others’ tweets, per the release.

Greene, whose rise to Congress was propelled by her embrace of QAnon, believes the timing of the Twitter suspension effectively silences her.

“This move eliminated any possibility for Congresswoman Greene to defend her reputation, her seat, and most importantly the votes of 230,000 Georgians in the 14th District on the Twitter platform,” she said in a release.

The Twitter suspension comes a day after a group of more than 70 Democrats signed a motion to expel Greene from Congress. Rep. Jimmy Gomez (D-Calif.) told Forbes that the move was based on her espousing conspiracy theories about mass shootings and the 9/11 terror attacks, calling for Democratic lawmakers’ executions, and the like.

She claims that Twitter suspended her to help Democrats expel her.

“It appears that Twitter is assisting Democrats in their attempt to overturn the 2020 election of Congresswoman Greene and silence not only her voice, but the voice of the Georgians who sent her to Congress,” her office added in the release.

Gomez had said that, while Republicans have expressed some interested in expelling her from Congress, none as of yet have agreed to support what would be an incredibly rare move.

Her office says that Twitter did not offer an explanation for the temporary suspension. This is the second time the company has locked Greene’s account.

Twitter temporarily suspended her in mid-January, alleging violations of its civic integrity policy. Greene had posted tweets calling for Americans to “mobilize” against “attacks on our liberties” and accusing Democrats, President Joe Biden, Silicon Valley, and others of looking for reasons to “implement Communist Chinese-style spying and censorship.” Her account was locked for 12 hours later that day.

Based on the time referenced in the press release, Greene’s account will be restored early this afternoon.