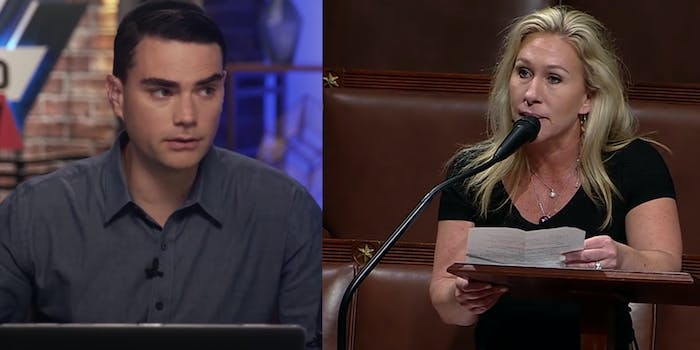 ‘When you lose Ben Shapiro you’re in trouble’: Even Ben Shapiro thinks Marjorie Taylor Greene went too far with her Holocaust comparison

'Just agreed with Ben Shapiro on Marjorie Taylor’s stance on her holocaust comparison, and this feels really awkward.'

The latest conservative to speak out against Rep. Marjorie Taylor Greene (R-Ga.) after she compared coronavirus safety measures to the Holocaust is Ben Shapiro, much to the internet’s surprise.

Greene has repeatedly compared vaccinations that protect against the coronavirus and mask mandates to the Holocaust. A Tuesday tweet by Greene, in particular, caught the attention of Shapiro, who is Jewish. In the tweet, Greene shared a local news story announcing that employees at a grocery store who are fully vaccinated will no longer be required to wear a face mask and that they will wear a vaccination logo on their name badge to show they are vaccinated.

“Vaccinated employees get a vaccination logo just like the Nazi’s forced Jewish people to wear a gold star,” Greene tweeted in response. “Vaccine passports & mask mandates create discrimination against unvaxxed people who trust their immune systems to a virus that is 99% survivable.”

“It is nothing like the Holocaust, and any comparison thereto is both insulting and insane,” he added.

People online are sharing their surprise at the fact they actually agree with Shapiro for once. “It is a weird day when i agree with ben shapiro but here we are,” one said.

And many think Greene must’ve really crossed the line if someone like Shapiro is condemning her.

“When you lose Ben Shapiro you’re in trouble,” another said.

Shapiro was apparently not the only conservative who thought Greene’s Tuesday tweet went too far. House Republican Leader Rep. Kevin McCarthy (R-Calif.) called her comparison “appalling” in a statement of condemnation on Tuesday.