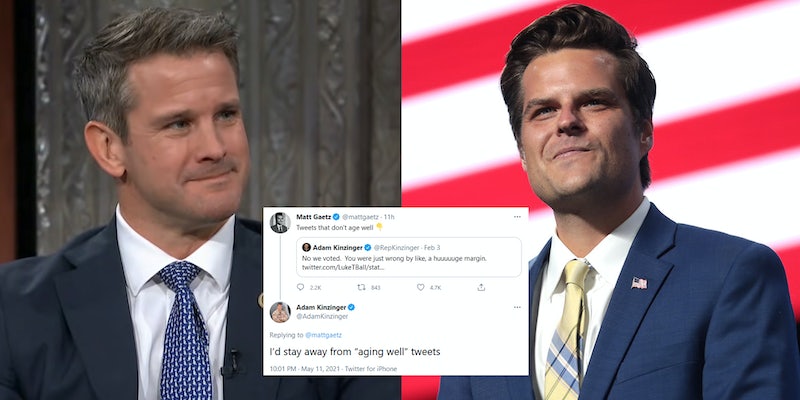 'I’m not sure @mattgaetz will ever recover from that third-degree burn.'

Rep. Matt Gaetz (R-Fla.) tried to come after Rep. Adam Kinzinger (R-Ill.) on Tuesday night ahead of a vote to oust Rep. Liz Cheney (R-Wy.) as the third-highest-ranking Republican in the House of Representatives. But his attempt was quickly shot down by the Illinois lawmaker.

Gaetz dug up a tweet from February where Kinzinger spoke about a failed attempt in February by House Republicans to remove Cheney from her post. In the tweet, Kinzinger wrote: “No we voted. you were just wrong by like, a huuuuuge margin,” calling out an appearance by Gaetz on Steve Bannon’s show where he said the party had the votes to oust her.

With the vote against Cheney going differently this time around, Gaetz tried to zing Kinzinger on Tuesday night by retweeting Kingzinger’s old tweet and adding to it: “Tweets that don’t age well” with a pointing down emoji.

But Kinzinger quickly responded with a tweet that caught the attention of thousands of people on Twitter.

House Republicans tried to oust Cheney in February, but failed. However, as she has refused to toe the new party line that President Joe Biden is legitimate, the rancor toward her from the furthest right in the GOP has intensified.

Kinzinger, who is more moderate, was clearly referring to Gaetz being under investigation for trafficking a minor for sex. Just two weeks ago, Gaetz’s friend Joel Greenberg admitted in a letter that both he and the congressman paid for sex with an underage girl. Greenberg is reportedly cooperating with prosecutors.

The Illinois Republican’s zinger at Gaetz caught the attention of a lot of people online.

“I’m not sure @mattgaetz will ever recover from that third degree burn,” one Twitter user wrote.

“Putting the ‘zinger’ in Kinzinger,” another Twitter user said.

Gaetz didn’t respond to Kinzinger’s burn but did continue posting after it, including retweeting a speech of his and commenting on a Los Angeles Rams football player’s tweet about missing Florida.

Cheney was subsequently booted from House leadership the morning, over her refusal to say that former President Donald Trump won the 2020 election.