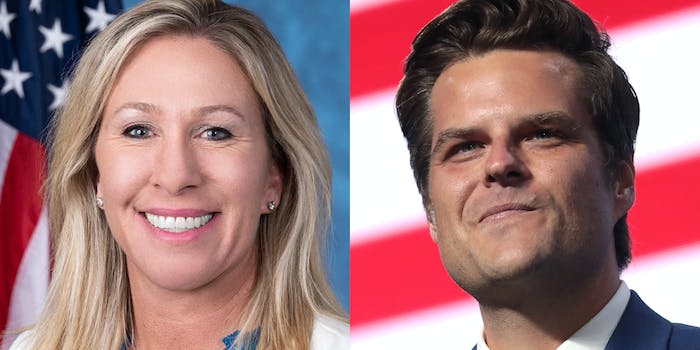 It’s often said that politics makes strange bedfellows. So perhaps this explains the alliance between Rep. Matt Gaetz (R-Fla.) and Rep. Marjorie Taylor Greene (R-Ga.). The pair recently announced their nationwide “America First” tour where they plan to “call out RINOs,” or Republicans in name only.

The announcement has people alternately scratching their heads, shuddering, and laughing. The two are arguably the most infamous members of Congress.

Federal authorities are investigating Gaetz for trafficking a minor for sex. The scandal intensified yesterday with a report from the Daily Beast that his friend, who’s expected to take a plea bargain, admitted both paid a minor for sex in a letter.

Greene, meanwhile, is notorious in her own right. She subscribes to the QAnon conspiracy theory that holds that an international cabal of cannibalistic, satanic pedophiles controls the world.

Some find it odd that a woman who believes a pedophilia-obsessed conspiracy theory would maintain an alliance with a man who’s accused of trafficking a minor for sex.

“I’ll be interested to hear how MargieQ reconciles her Q-ness with hanging out with an accused pedophile,” commented ShelKel2.

Sun-Sentinel columnist Fred Grimm was among the many who had some reservations about letting Gaetz roam freely about the country. “Lock up da chilluns,” he joked on Twitter.

Many, many people mocked the pair. The Duty to Warn Twitter account’s challenge to rename the tour attracted quite a few submissions, such as “MyPillow Presents: The Greene-Gaetz of Hell Tour,” “Raising Bail for Jail Tour,” “The Gaetz and Greene Misinformation Machine Tour,” and “The Alien and Sedition Act.”

Twitter humorists had quite a time roasting the duo.

Gaetz and Greene’s first stop is in The Villages, a Florida retirement mecca that’s equally known for right-wing politics and sexually transmitted diseases.

Some were relieved—the minimum age to live in The Villages is 55.

Greene and Gaetz have also created a joint fundraising committee. It seems they genuinely are tying their fortunes to one another, for better or, more likely, worse.