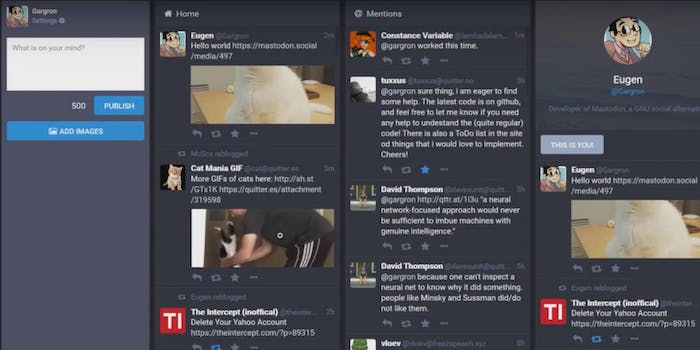 Mastodon is an open source, decentralized version of Twitter

Mastodon is an interesting open source alternative to Twitter.

Mastodon bills itself as a free, open-source social media server. Like Twitter, it’s a microblogging platform. Unlike Twitter, it’s non-commercial and not centrally owned, so you don’t have to worry about what will happen to your account or your posts if it gets acquired by another company.

Mastodon has a similar look and feel to Tweetdeck, employing a column-based UI for your timeline, mentions, and its compose field. You can share thoughts or article links via text, and can attach media to your posts.

Unfortunately, like any new social network, it suffers from the chicken-and-egg problem of getting new users on board. To speed things up though, you can add your Twitter followers to Mastodon using this tool here. (And, if you’d prefer, you can also run the app as a closed instance, keeping it private to a specific group of friends or coworkers.)

If you’re looking for a social media experience that’s not backed by Peter Thiel or favored by our president-elect, trying Mastodon could be worth a shot.