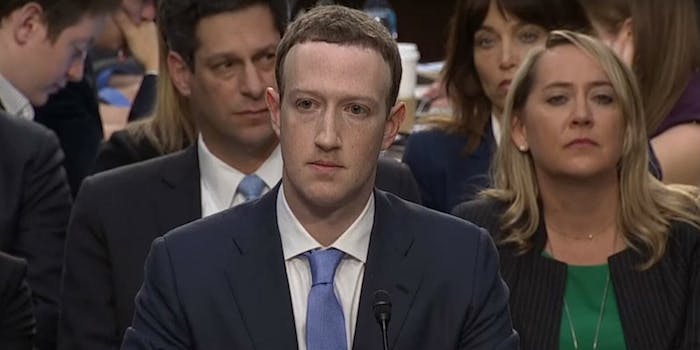 Here’s how Mark Zuckerberg will apologize to the E.U.

Mark Zuckerberg is putting on his gloves for a third round testimony on the actions Facebook is taking to ensure the privacy of its users and prevent voter manipulation.

This time around, the CEO will meet on Tuesday with the European Parliament in Brussels. His hearing was originally planned to be away from the public eye, but pressure from E.U. lawmakers to live up to his company’s renewed emphasis on transparency forced his hand.

The testimony, marking Zuckerberg’s first appearance in Europe since the Cambridge Analytica scandal, will now be livestreamed on the E.U. Parliament website.

Facebook prepared a copy of Zuckerberg’s opening remarks and it appears to echo much of what was said in his statement on Capitol Hill last month. Namely, that he is “sorry” for not taking a broad enough view of the company’s responsibilities. He will go on to outline the actions the social giant is taking to solve problems that have plagued it for years.

“Whether it’s fake news, foreign interference in elections, or developers misusing people’s information, we didn’t take a broad enough view of our responsibilities. That was a mistake, and I’m sorry,” he is expected to say.

The polarizing leader will also announce the doubling of safety and security workers to more than 20,000 by year’s end and renew his commitment to the region, announcing Facebook will hire 3,000 more employees for a total of 10,000 across 12 European cities.

Zuckerberg will field difficult questions by about a dozen of the top leaders in the E.U., a region where Facebook and other social networks are strictly regulated. We’re likely to hear many of the same questions asked during his previous testimonies in the U.S. about the Cambridge Analytica scandal that saw a political data firm exploit the personal information of 87 million users. Voter manipulation by Kremlin-backed bot accounts is also expected to be a point of emphasis.

While it was briefly mentioned in his U.S. testimonies, the General Data Protection Regulation (GDPR) will be among the topics European lawmakers and citizens are most interested in hearing about. The strict regulations go into effect on May 25, forcing social media companies like Facebook to rethink their privacy policies. Zuckerberg said last month that Facebook would extend GDPR privacy policies to users worldwide, though his statement has been challenged by critics who contend there’s nothing incentivizing it to do so.

Zuckerberg will appear before the European Parliament on Tuesday at 12:30pm ET. You can follow these instructions to watch a livestream of the high-profile event.

Here are the full opening remarks:

“Europeans make up a large and incredibly important part of our global community. Many of the values Europeans care most deeply about are values we share: from the importance of human rights and the need for community to a love of technology, with all the potential it brings.

“In order to realize that potential, we need to make technology a force for good. As Facebook has grown, we’ve helped give people everywhere a powerful new tool to stay connected with the people they care about. After the recent terrorist attacks in Berlin, Paris, London and here in Brussels, tens of thousands of people have used Safety Check to let their friends and family know they’re safe. Refugees arriving in Europe are using Facebook to stay in touch with their loved ones back home and find new communities here. There are 18 million small businesses in Europe that use Facebook today, mostly for free — almost half of whom say they have hired more people as a result.

“But it’s also become clear over the last couple of years that we haven’t done enough to prevent the tools we’ve built from being used for harm as well. Whether it’s fake news, foreign interference in elections or developers misusing people’s information, we didn’t take a broad enough view of our responsibilities. That was a mistake, and I’m sorry.

“It will take time to work through all of the changes we must make. But I’m committed to getting it right — and to making the significant investments needed to keep people safe. For example, we’re doubling the number of people working on safety and security to more than 20,000 people by the end of this year. On top of the investments we’re making in other areas, I expect this will significantly impact our profitability. But I want to be clear: keeping people safe will always be more important than maximizing our profits.

“We’re committed to Europe. Ireland is home to our European Headquarters. London is home to our biggest engineering team outside the United States; Paris is home to our artificial intelligence research lab; and we have data centers in Sweden, Ireland and Denmark, which will open in 2020. By the end of 2018, Facebook will employ 10,000 people across 12 European cities — up from 7,000 today. And we will continue to invest. For example, we’ve committed to providing one million people and small businesses with digital skills training by 2020.

“My top priority has always been our social mission of connecting people, helping them to build communities and bringing the world closer together.

“I believe deeply in what we’re doing. And when we address these challenges, I know we’ll look back and view helping people connect and giving more people a voice as a positive force here in Europe and around the world.