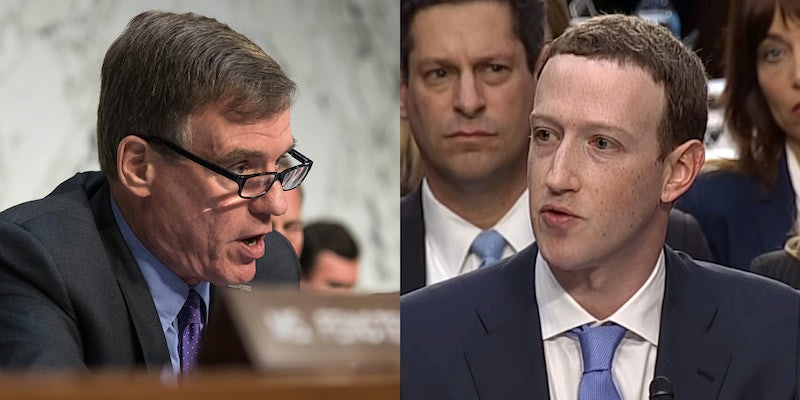 It's the first big proposal we've seen since congressional hearings.

If you watched this year’s Facebook hearings, you know one of Washington’s dirtiest open secrets: politicians don’t know how to deal with technology.

The average age of a senator is 62, and if you think of how your parents and grandparents relate to technology, you see the problem. Though Sen. Mark Warner (D-Va.) is actually slightly older than the average senator (63), he has a technology background as a founder and investor. Now, he has set his sights on being a Silicon Valley regulator.

Warner put out a document outlining 20 ideas about technology on Monday as a starting point for a discussion of just how to regulate the tech industry. While the document offers little more than a broad sketch of what legislation could look like, some of his ideas could fundamentally change the internet in America.

The Virginia senator’s proposal is broken down into three main categories: fighting political disinformation, privacy protections, and promoting competition. While the items range in terms of scope and feasibility—from promoting digital literacy to building an apparatus for algorithm inspection—his document provides an interesting starting point.

You can read the full paper at Axios.

Those following the Russiagate scandal will be most interested in this section of Warner’s proposal. In terms of the future of the internet, however, this section is the least interesting. Here, Warner sometimes gets bogged down in some partisan talking points (Trump is name-checked) and Russiagate grousing, but there are some interesting ideas and sorely needed reforms put forth here nonetheless.

He also suggests the modification of Section 230 of the Communications Decency Act, which shields companies from liability over users’ posts. Warner would change the rules so companies are liable if posts on their platform are found to be defamatory. While perhaps well-intentioned, this raised red flags among some tech writers, who see the potential for abuse, especially against smaller platforms.

That isn’t to say this section doesn’t have some good ideas. Warner proposes a “Public Interest Data Access Bill” that would give NGOs access to data and watchdogs a better sense of what is going on online.

Opening up data is one of the most attractive parts of Warner’s proposal. In his “Competition” section, he adds university researchers and startups to the list of groups who should get access to some data sets.

Warner also suggests that there be a task force that coordinates various governmental organizations around election integrity, which feels appropriate given what we know about election interference. Along with this, he proposes “increasing deterrence against foreign manipulation,” which although it seems reasonable, is not necessarily actionable.

This section offers some solutions that have more long-term and expansive view than those outlined in the section on disinformation. One of the best ideas Warner presents is enacting something similar to G.D.P.R., the newly adapted, robust privacy guidelines in the EU. The General Data Protection Regulation dictates how companies can obtain and handle data and was the motivating factor for all of those privacy update emails you got in May.

Warner proposes several items that would accompany a strong G.D.P.R.-like code, several of which also exist in Europe in some form. He proposes giving the FTC powers of privacy regulation and declaring internet companies “information fiduciaries,” meaning they have a legal obligation to protect user data. He also suggests proprietary algorithms be opened to review for discrimination and fairness.

This section offers some general ideas about how to handle data and protect consumers. While Warner is light on specifics, he provides a number of examples of how Europe has implemented similar protections. It’s clear that the EU’s work would be a starting point for debate on any of these proposals, and as such Warner keeps it breezy.

These feel like realistic and important measures, so long as giant internet companies don’t lobby against them, which they likely will.

Ideas that Warner introduces around business and competition feel like the most ambitious of the bunch. His thoughts here also offer the most interesting ways to think about the internet of the future in the document.

He also suggests legislation around data transparency, meaning that consumers can know how much their data is “worth” when they are giving it up in exchange for free services. As Warner points out, and anyone online is likely sympathetic to, “the terms of the bargain—free service in exchange for access to consumer data—continue to be amended in favor of the platform.”

Additionally, Warner suggests large companies have an “interoperability” requirement, meaning that key functions of large platforms work on other platforms. The easiest way to understand this is the real world example of AOL Instant Messenger, which was required to be interoperable so that customers wouldn’t be forced to pay for AOL just to use AIM.

The proposals in the Competition section might be the most interesting, but they are also ideas that are easy to imagine the tech companies fighting. While the other two sections speak to broad policies governing tech, these policies attempt to level the business playing field. If history is any indications, Silicon Valley behemoths will fight such regulations as hard as oil companies and banks have.

Overall, Warner’s proposals are broad and take an admirably long view. Few of the 20 items outlined in the sparse 23-page report could happen overnight, and the document acknowledges that. Instead of thinking of this proposal as the beginning of an omnibus bill to fix the internet, think of this as the starting point of a dialogue that could lead to various different bills.

His regulatory measures don’t sound especially burdensome, but there is a blueprint here for reigning in some of the worst excesses of tech behemoths. In short, it is a proposal that feels like something an establishment Democrat would come up with, and as such there are a number of good ideas that already feel like they may not go far enough.

With the exception of net neutrality, there isn’t a political orthodoxy around the internet on either side of the aisle. With this document, Warner tries to suss out what the Democratic Party’s vision for the internet could be. While it isn’t perfect, the measures he presents would make the internet better than it is now.