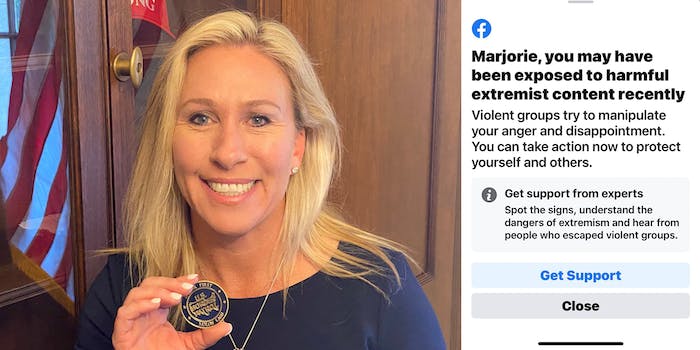 Lauren Boebert also posted about getting a message from Facebook.

When Rep. Marjorie Taylor Greene (R-Ga.) logged into Facebook recently, she said was greeted with a warning: “Marjorie, you may have been exposed to harmful extremist content recently,” the warning began, “Violent groups try to manipulate your anger and disappointment. You can take action now to protect yourself and others.”

True to form, the freshman congresswoman used the incident as an opportunity to criticize Democrats.

“I have to say I sure am glad that Facebook cares about me like this. I’m going to have to ask them to protect me bc I’ve been exposed to the radical Democrat’s bills this week which certainly is extremist content,” Greene tweeted along with a screenshot of the warning, which included a link for her to get help.

But to people online, Greene’s attempt at mockery in her tweet may as well have been a prompt to drag her extremist views and belief in the QAnon conspiracy theory. She was thoroughly owned in the comments.

Her views and statements such as comparing mask mandates to the Holocaust have earned Greene widespread condemnation, including from members of her own party. Earlier this year, she lost her committee assignments after footage resurfaced of her ridiculing Parkland school shooting survivor David Hogg on the street.

One person succinctly encapsulated a sentiment many shared. “Why are you being warned? You are the one Facebook should be warning everyone about,” they commented on her tweet.

Greene wasn’t the only QAnon following member of Congress to receive a warning from Facebook about the extremist content they consumed.

“Facebook just warned me that I may have been subjected to extremist content and asked me to report anyone I may know that is becoming an extremist,” Boebert tweeted. “I have more than 200 coworkers I need to report.”

It was almost as if they were parroting the same talking points.

“Thank you for finally admitting that you and your followers are Radical Extremists,” commented Christopher Eagle.

Facebook is testing these warnings in the hopes of combatting extremism on the platform, which has long been a fertile recruiting and indoctrinating ground for extremists and conspiracy theorists, CNN reports.