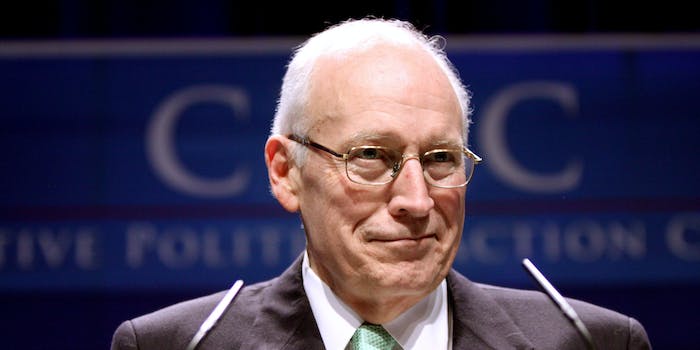 Welcome to the Monday edition of Internet Insider, where we dissect online disinformation—one dumb conspiracy at a time. Today, we take a look at the QAnon world’s latest execution fantasy.

Followers of the QAnon conspiracy theory are once again claiming that a high-profile politician has been executed at Guantanamo Bay.

This time, conspiracy theorists are convinced that former Vice President Dick Cheney was hanged at the notorious U.S. military prison.

The claim began circulating online last week after an article appeared on a blog known as Real Raw News.

The article sensationally claimed that Cheney had been executed at the detention facility after being charged with “treason.”

“Cheney, who on 18 January was convicted of treason and murder and sentenced to death, was hanged at Guantanamo Bay Saturday morning before a quorum of military brass—Rear Adm. Darse E. Crandall and ‘White Hat’ loyalists from other branches of the Armed Forces, excluding the National Guard and Coast Guard,” the blog claimed.

Not only that, the story went on to allege that Cheney had initially survived the execution after a trap door failed to open.

Incredibly, the outlandish story quickly spread across the internet. Dozens of accounts shared the allegation on sites such as Twitter.

Followers of the QAnon conspiracy theory—which centers around people believing former President Donald Trump is in a secrete battle against a cabal of child-eating pedophiles—have a long-running obsession with Guantanamo Bay.

Statistics on the Real Raw News blog itself claim that more than 53,000 readers had viewed the article since its publication.

Over 900 commenters on the article gleefully celebrated what they believed was a legitimate news report.

“Yay!!!! One less DICK in the world, glad he is dead, jumping for joy, just wish I could have witnessed this mass-murdering bastage [sic] meet the end of that rope,” one commenter said.

As should be obvious, the news article is not credible. Real Raw News openly admits in its “About Us” section that the website “contains humor, parody, and satire.”

After a year of reviewing products, it takes a lot to genuinely wow our editorial team. But a few seriously life-changing gadgets did stand out from the rest.

So get ready to load up your shopping carts. Here are the best products of 2021.

Not only that, the article’s author, who operated under the pseudonym Mike Baxter, has been a well known spreader of disinformation for years.

In a statement to the fact-checking website Lead Stories, a duty officer at the Pentagon called the story’s claims “false.”

This is far from the first time that Real Raw News has duped QAnon adherents into believing that high-profile politicians were executed at Guantanamo Bay.

The site previously made the same claim with former Secretary of State Hillary Clinton, among others.

Conspiracy theorists’ obsession with Guantanamo Bay led to a frenzy online last August after the naval base announced a routine training drill.

QAnon supporters were convinced that the drill was a cover for “The Storm,” a mythical day in QAnon lore in which former President Donald Trump finally executes his political enemies.

Yet just like with every other single prediction, the so-called “Storm” never came to pass.

Despite the absurdity of such claims, conspiracy theorists just can’t seem to get enough of fake execution claims.

Paranoia runs so deep among some conservatives that even perceived victories are viewed with suspicion.

Anti-vaxxers are buying stores out of wormwood, which they believe is the next miracle COVID cure

‘In the running for biggest moron in Congress’: Republican shares quote thinking it’s by Voltaire, but is actually from a neo-Nazi

Rep. Thomas Massie is being criticized for sharing the misattributed quote.

Can ‘Buffy’ survive Joss Whedon? How to love a problematic fave

Here are some tips for indulging in your fave comfortably and consciously.*