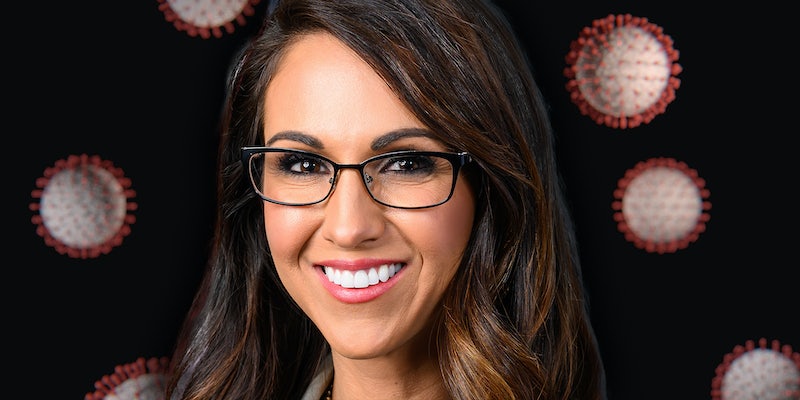 US House of Representatives/Wikipedia (Public Domain)

A tweet made by Rep. Lauren Boebert (R-Colo.) that downplayed the coronavirus pandemic on Wednesday was quickly deleted after receiving widespread pushback on the platform.

Known best for her promotion of far-right conspiracy theories, Boebert sarcastically claimed that the Delta variant of the coronavirus could be defeated by simply ignoring the media and voting for conservatives.

“The easiest way to make the Delta variant go away is to turn off CNN. And vote Republican,” Boebert wrote before deleting the tweet, according to ProPublica’s Politwoops, a service that tracks politician’s tweets.

The tweet, unsurprisingly, was met with an immediate backlash from both citizens and lawmakers alike.

“Colorado’s @RepBoebert has deleted her tweet on the Delta variant,” reporter Kyle Clark wrote. “Boebert represents Mesa County, where the Delta variant was first found in Colorado and now makes up 50%+ of its COVID cases.”

The Delta variant, which was first detected in India, is suspected to be anywhere from 40 to 60 percent more contagious than the original strain.

“Lauren Boebert proves once again that stupidity has a champion in Colorado,” Woodrow tweeted.

Although Boebert has continued on tweeting as if nothing happened, users on the social media site continue to remind the lawmaker of her remark.

“Maybe you should check in with the hospitals in Mesa County (that’s your district),” @striveforfacts wrote. “They have a lot of Delta variant patients and they are too busy to watch CNN. How about helping to get your district vaccinated??”

Despite the uproar, Boebert has not commented on her latest political embarrassment.