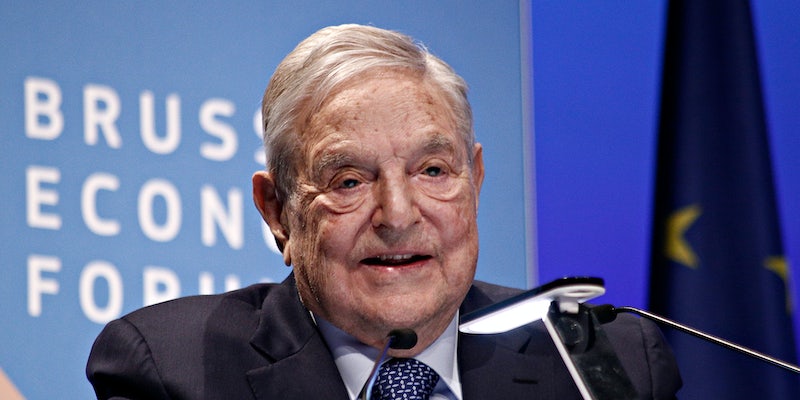 George Soros is entangled in another immigration conspiracy.

For the last two-plus decades, a central tenet of right-wing discourse has been that if you can’t figure out who is to blame for something you dislike, it’s George Soros.

The Hungarian billionaire is famously a patron to countless liberal causes, politicians, and nonprofits. And that propensity for giving away money to leftist institutions has made him as dominant a figure in the conspiracy world as almost anyone. Soros has been smeared as a secret Nazi who has sworn to destroy America, a genocidal maniac, the secret funder of Black Lives Matter and antifa, and a chaos agent attempting to subvert global democracy and health freedom.

Because of that, any organization that Soros has ever given money to, either directly or through a foundation, is inextricably linked to the conspiracies swirling around him. And because he gives a lot of money away, a great number of nonprofits get sucked into this misinformation vortex.

This week, the conservative media complex hit viral paydirt with the allegation that the Biden Administration, through the Department of Health and Human Services (HHS), had “given” the “Soros-backed” Vera Institute of Justice $164 million to “provide immigration-related legal services to unaccompanied minors.”

The story broke on Fox News in mid-January and went viral in the conservative media sphere a few weeks later. Since then, various tweets about the “giveaway” got thousands of shares, and inspired articles on a number of major pro-Trump, anti-Soros websites. Some claimed simply that Biden gave the money (an amount also written as “hundreds of millions” or “$200 million”) to Soros to spend on subverting American border policy. Major conservative pundits like Dinesh D’Souza, Trump cronies like 2020 election denier Jenna Ellis, and many others retweeted blog posts about the “giveaway,” calling it a “slush fund,” “disturbing,” a backdoor for funding human trafficking, and more.

“Even as the White House claims that Joe Biden is not soft on crime, it has been reported that his administration has the potential to give nearly $200 million to a Soros-linked group to help criminal illegals escape punishment,” wrote right-wing website the Western Journal—believing it all part of a plan by the “anti-American billionaire” to destabilize the border.

Such claims are familiar from the Trump years, particularly October 2018, when Soros was accused of “funding” migrant caravans heading north from Central America to help swing the midterm elections to Democrats.

In fomenting these fears and concerns, there are two distinct issues at work. The Vera Institute of Justice was founded in 1961 as an independent nonprofit devoted to advancing justice reform, eliminating cash bail, and leveling out biases in American policing. And it has been a recipient of federal grant money through HHS and the Department of Justice in the years prior. Even the Blaze had to admit that Biden didn’t simply start handing the Vera Institute money to spend on legal services for undocumented immigrants, writing that “During the Trump administration, from July 1, 2019, to June 30, 2020, almost $137 million of the group’s $174 million in revenue came from government grants.”

Outrage over undocumented immigrants getting legal aid or health benefits has been a standard-issue source of complaints for the right for decades, fueling much of the increasingly anarchic dispute over border security. So why is this one particular grant kicking up so much fuss? That’s where the “Soros-backed” part of the equation comes in. In particular, Soros was singled out as having funded the Vera Institute, with the Blaze writing that they’d received “more than $10 million in funding from Soros’ Open Society Foundations from 2016 to 2019.”

The Vera Institute did indeed receive a $10 million grant in 2016 from the Open Society Foundations, an organization principally funded by Soros. But since then, the Foundations made only four other grants, totaling $770,000—and none since 2018. The Vera Institute’s annual operating income is well over $140 million, meaning that even when they received their biggest grant from him, Soros funded less than 10% of their overall expenses.

Not that that matters, because these distinctions are usually lost among the rush to demonize groups and causes that Soros contributes to, particularly when it comes to immigration. When Soros announced in 2016 that he was committing $500 million through the Open Society Foundations for economic support for migrants and refugees landing in Europe, the news of the grant was passed around some of the same right-wing blogs that jumped on the Vera Institute story. Back then, it was met with howls that it was part of a greater plot to hinder former President Donald Trump’s campaign.

Soros has given so much money away through the Open Society Foundations that virtually any recipient of a grant or fellowship has come under a microscope—or the bullhorn of right-wing rabble-rousers. His “tentacles” are allegedly seen in the massive uptick in social justice protests over the last few years, making everyone involved supposed puppets of a globalist demagogue. And the mere hint of a Soros presence in a nonprofit’s funding, even if it was a minor amount years ago, is fodder for more deranged conspiracy theories about him and the people he’s trying to support.

Even when the numbers don’t really add up.