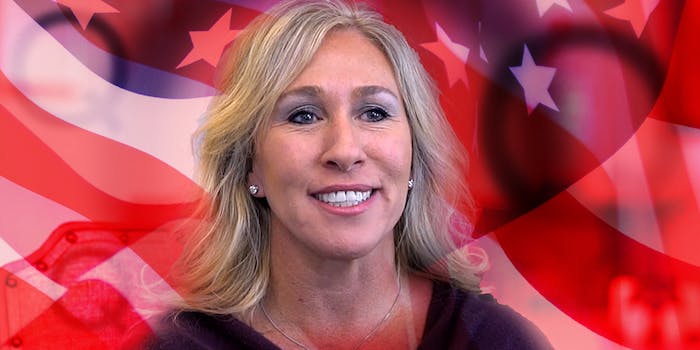 Greene, a QAnon follower, will represent Georgia in Congress.

Marjorie Taylor Greene, a Republican candidate for Congress, has won her election for the House of Representatives.

The race was called by Decision Desk HQ.

Greene was among the batch of Republican candidates who support the baseless QAnon conspiracy theory, which holds that an evil Satanic cabal of child-sacrificing, pedophile liberals controls the world. QAnon followers believe that President Donald Trump was sent by god to take down this fictitious cabal, and clues are being revealed by a shadowy government insider known only as “Q.”

Greene has also made headlines for Islamophobic comments, such as that Muslims shouldn’t be allowed to hold public office and arguing that 9/11 was an inside job.

She made vilifying high-profile Democrats such as Rep. Nancy Pelosi (D-Calif.) and Rep. Alexandria Ocasio-Cortez (D-N.Y.) a hallmark of her campaign for Georgia’s heavily Republican 14th Congressional District.

Greene surprised many when she bested her Republican primary challenger Dr. John Cowan, a neurosurgeon who campaigned as a traditional conservative.

Following Greene’s triumph in the primary, Trump called her a “future Republican star.” According to Federal Election Commission records, Greene has donated thousands to Trump’s campaign since 2016, including nearly $17,000 this cycle.

Although Georgia’s 14th district sways heavily Republican, some thought that Democrat Kevin Van Ausdal could best Greene based on her extremism and belief in QAnon, which she used to gain prominence, then distanced herself from somewhat during the campaign. Van Ausdal was polling historically high for a Democrat in that district until he dropped out abruptly weeks after the primary, citing “family and personal reasons.”

His move made it all but certain that Greene would win the seat. Tonight, it became official.

Decision Desk called the race for Greene less than 30 minutes after polls closed.

QAnon is officially going to Congress.