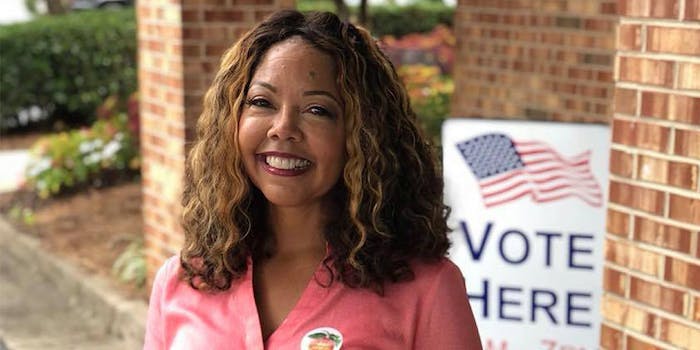 Lucy McBath won a surprising victory in Georgia, in a seat the Democrats only recently lost.

When Democrat Lucy McBath beat Karen Handel for a seat in Georgia’s 6th District, it was one of a handful of upsets that Democrats managed to pull off and a specifically impressive one given the history of the seat.

And McBath is indicative of the kind of candidate that, across the board, Democrats won with: a political neophyte running on issues that were near-and-dear to the heart.

Who is Lucy McBath?

Lucy McBath’s tight victory—she won by just a few thousand votes—was partially pushed along by the high-profile gubernatorial race in Georgia. In that race, Stacey Abrams was leading a fight against entrenched Republican powers. It’s likely that top-of-the-ticket vote that helped propel McBath to victory. Just over a year ago, Jon Ossoff ran for the same seat in a run-ff and fell short.

But at the same time, McBath was part of a wave of candidates that thrilled voters with principled stances. She is also one of several women of color who broke down barriers in the 2018 election, like Ayanna Pressley, Alexandria Ocasio-Cortez, and Rashida Tlaib.

Lucy McBath: From Mother to Activist to Congresswoman

Lucy McBath was leading a relatively quiet life, working as a flight attendant for Delta, until her son 17-year-old son, Jordan Davis, was killed in a shooting in 2012. It was a senseless murder at a convenience store. The shooter—who is white—was agitated that Davis was playing his music too loud. He fired at least eight shots in the SUV where Davis was sitting.

After Davis’ death, McBath became a gun control activist. She eventually became involved with “Everytown for Gun Safety,” a lobbying group with political clout that wants to curb gun violence. In 2016, McBath spoke at the Democratic National Convention in support of Hillary Clinton.

On the campaign trail, McBath often referenced the death of her son and spoke about other black youths who have been murdered.

In a moving TV spot, McBath spoke about her son’s death.

McBath also benefited from the support of Emily’s List, a group that focuses on electing Democratic women to Congress. Because of her stance on gun violence, Everytown for Gun Safety was a massive funder of McBath’s mission. The Atlanta-Journal Constitution notes that the group put $4.5 million into the race.

A lot of that money went into funding television ads.

In her victory statement, Lucy McBath referenced her son’s death, saying, “After my son was lost to gun violence, I stood up and started demanding more. After Parkland, I was compelled to enter this race for Congress—to provide leadership that would be about the business of putting lives over profit.”

While McBath’s primary platform is gun control, she often talks about the importance of giving women affordable access to medical care. She has had breast cancer twice in her life.

On healthcare, McBath mostly echoes the talking points of mainstream Democrats. She supports the Affordable Care Act and has advocated for lowering the Medicare eligibility age to 55. That’s still a little less heavy-hitting than the Medicare for All policies that progressive Democrats favor, but was a stance that was balanced enough to get her into office.

Lucy McBath now occupies a seat that has a long history of being a Republican stronghold. It’s not in the deep red that you might find in other areas of the south, certainly. But McBath’s victory definitely shook up the establishment.

Karen Handel won the seat during a special election after Tom Price was tapped by President Trump to lead the Department of Health and Human Services (Price resigned after it was revealed that he abusing taxpayer money for private flight).

In the June 2017 race, Handel edged out Jon Ossoff, earning 52 percent of the vote. It was the most expensive race in the history of the House of Representatives, costing $50 million.

McBath also takes over a seat that has been held by another infamous tenant. Former Speaker of the House Newt Gingrich held the seat from 1978 until 1998.

If McBath wants to hold onto her seat in 2020, she will have to battle as the first Democratic incumbent the district has seen in some time.