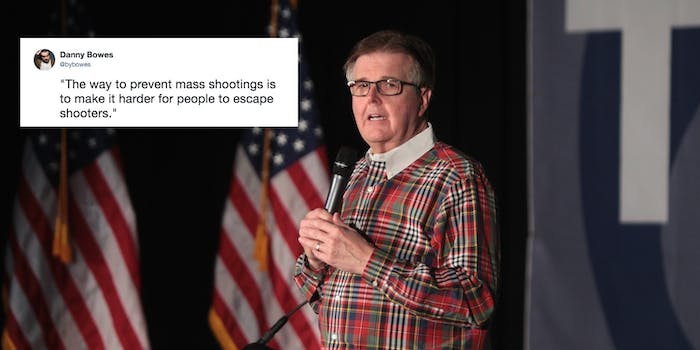 Patrick gets endorsed by the NRA.

Following a high school mass shooting in his state on Friday in which ten people died, Texas Lt. Gov. Dan Patrick claimed such massacres happen because school buildings have “too many entrances and too many exits.”

“We have to look at the design of our schools moving forward and retrofitting schools that are already built,” Patrick said, speaking during a press conference. “There are too many entrances and too many exits to our over 8,000 campuses in Texas.”

“There aren’t enough people to put a guard at every entrance and exit,” he continued. “Maybe we need to look at limiting the entrance and exits into our schools so that we can have law enforcement looking at the people coming in through one or two entrances.”

TX Lt Gov Dan Patrick, a fierce opponent of gun control, says today's shooting may have been caused by Texas schools having "too many entrances and too many exits." pic.twitter.com/tLByRqL6oX

While students at high schools across Washington D.C. have reportedly entered the Capitol building to demand gun reform, Patrick is asking that legislators “to think out of the box.” Patrick’s creativity, of course, is informed by donations from the National Rifle Association, the pro-gun lobbying organization, in 2017 and heartily endorsed by it in the 2014 general election.

His suggestion that cutting down on doorways might bring an end to mass shootings across the country, however, was laughed off and met with outrage from Twitter users.

Omfg they're going to ban doors before they ban assault rifles https://t.co/v0A6QLfGfW

Things that Texas Republicans are blaming this shooting on:

Things they aren’t considering for blame:

Texas governor is coming for your doors.

"The way to prevent mass shootings is to make it harder for people to escape shooters." https://t.co/bJbEzsAiyQ

Ah yes, the old “eliminate all escape routes so the shooter literally has the entire school cornered” technique. Could work! https://t.co/MWO63RFUrD