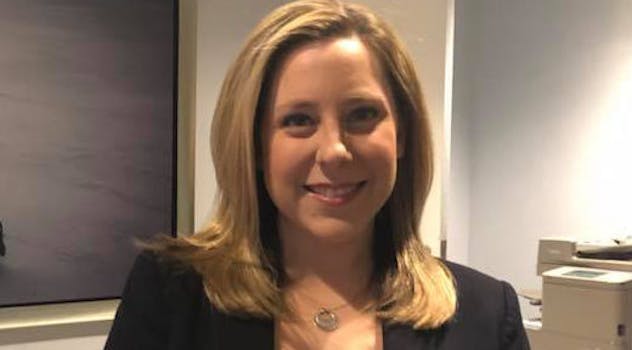 She's going after one of the more entrenched members of Congress.

Liuba Grechen Shirley may not have the name recognition of Alexandria Ocasio-Cortez or Randy Bryce, but she finds herself in their company as they try to flip Congress.

A fifth-generation Long Islander and first-time candidate, Grechen Shirley has been endorsed by Sen. Elizabeth Warren (D-Mass.) and Sen. Kirsten Gillibrand (D-N.Y.), and organizations like EMILY’s List and Our Revolution.

Who is Liuba Grechen Shirley?

Grechen Shirley, a 37-year-old mother of two, was raised by a single mother. She currently lives in the home her immigrant grandparents bought almost 80 years ago. According to the New York Times, she previously worked in “global economic development and human rights for nonprofit groups, as well as the United Nations Foundation and New York University.”

In August, Grechen Shirley released her campaign video called “Personal,” which features sweeping music, a voiceover focused on working-class issues, and video of her on the campaign trail and at home.

In an election cycle where women are advertising motherhood as a political strength, Grechen Shirley has been honest about the difficulty of simultaneously running for office and raising a family.

In the video, she says, “More than half of our representatives are millionaires and they don’t understand how the policies they enact affect our lives.”

“That’s why we need more working people in office, and that’s why I decided to run. But running for office is a full-time job. I was told with two kids, a husband that worked full time, and no childcare that it was impossible. Well, it wasn’t impossible. It’s just really hard.”

Grechen Shirley made national headlines this May by becoming the first woman to receive federal approval to use campaign funds for childcare. The decision, which gained support from Hillary Clinton and 24 members of Congress, was unanimously approved by the Federal Election Commission (FEC).

“With the FEC’s landmark decision, more working parents who can’t afford to pay out of pocket for full-time childcare will be able to run for office,” Grechen Shirley told the Daily Dot in an email. “This will make Congress more socioeconomically diverse and add the critical voice of working parents with small children to Congress.”

While the FEC’s decision was not gender-specific, women still take on a larger share of childcare and household duties. It’s a real, rather than symbolic, win for prospective female candidates.

“In this year alone, record-breaking numbers of women are running for federal office,” she said. “And I think this game-changing decision will help inspire even more.”

What is Grechen Shirley’s platform?

Healthcare was the catalyst that inspired Grechen Shirley to run for Congress. In fact, she decided to run the day Rep. King voted to repeal the Affordable Care Act. Grechen Shirley supports Medicare-for-All and believes “healthcare is a human right.”

Similar to Ocasio Cortez and Bryce, she frames healthcare as a deeply personal issue. On her website, she writes about the medical bills she faced after giving birth. She recounts arguing with doctors who wouldn’t take her mother’s insurance for six spinal surgeries.

Regarding women’s healthcare, the right to choose prevails in every facet of Grechen Shirley’s positions. Whether it’s maternity care, affordable contraception or safe, legal abortions, she has said women—of all income levels—should have sexual and reproductive autonomy.

In terms of campaign finance reform, Grechen Shirley has pledged not to accept corporate PAC money. She wants to roll back Citizens United and work toward publicly financing elections.

Liuba’s website does not call for the abolishment of ICE, nor does it mention ICE directly, which puts her at odds with some other progressive candidates. However, her immigration policy includes supporting DACA (specifically the DREAM Act of 2017), a pathway to citizenship, and extending Temporary Protected Status, which allows people from specific countries to live and work in America due to unsafe conditions in their home countries.

Who is Grechen Shirley’s opponent?

Grechen Shirley’s opponent, Rep. Peter King (R-N.Y.), has been in the U.S. House of Representatives for 25 years. King was once found to be one of Congress’s most bipartisan members by the Lugar Center. An old-school Republican, King now aligns himself closely with the president.

King is particularly hard-right on immigration. He supported Trump’s Muslim ban, telling Politico the executive order was “long overdue.” He also supported detaining migrants at the border. King told Talking Points Memo that “the president is absolutely right that we should be detaining more of these people,” and that “Americans care more about Americans.”

However, King has deviated from and even criticized Trump at times.

After the president’s highly-controversial Charlottesville comments, King tweeted: “The white supremacists & Neo-Nazis who organized Charlottesville event have no place in politics culture or debate & must b condemned by all.” King also voted against the Tax Cut and Jobs Act of 2017 because the legislation eliminated the full deduction for state and local taxes—which will greatly affect his district.

Grechen Shirley told the Daily Dot that King “has been in basic agreement with President Trump on most issues—and is clearly an extremist, not a moderate.”

King’s office did not respond to a request for comment.

The race has begun to look closer than it did earlier this year. According to the Grechen Shirley campaign, they’ve raised $1 million in donations in September free of corporate PAC money. They have also received more small-dollarr donations than any King challenger in the last 12 years.

As of late September, the Cook Political Report changed the race from Solid Republican to Likely Republican.

In a congressional district that was a Pivot County—a county that went for Trump in 2016 after voting for Obama in 2008 and 2012—it’s hard to predict if the district will flip. Despite this, Grechen Shirley says that voters in New York’s second district are ready for change.

“People who are registered Republicans have told me that they have been inspired by my race, and are going to vote for me in November,” she told the Daily Dot. “The people of this district are just sick and tired of the same and want a real champion for working families to represent them in Congress.”