With Keurig recalling some coffee makers, now is the perfect time to hack yours

Making ramen is just the beginning.

If you’ve purchased a Keurig as a holiday gift, you might want to think about returning it. Coffee machine maker Keurig Green Mountain is recalling 6.6 million coffee machines following reports of burn-related injuries and boiling water escaping the brewer.

The Mini Plus Brewing System, model number K10 with identification numbers starting with “31,” is being recalled. These particular coffee makers were sold between 2009 and 2014 for about $100. Millions of consumers are affected and should contact Keurig for a free repair.

Keurigs, which turn tiny, packed bean pods into a steaming cup of coffee in just one minute, are hugely popular among coffee lovers. The Keurig is the original pod-coffee brewer, although numerous copycats have popped up since its introduction. Starbucks has its Verismo machine, while other coffee makers, including Dunkin’ Donuts, make pods for the Keurig called K-cups.

If you’re one of the millions affected by the recall, it’s probably a good idea to get that free repair. But in the meantime, there are a handful of interesting ways to hack your Keurig. If you’re thinking about upgrading to a new Keurig product with digital rights management that prevents counterfeit K-cups from being used, here are some nifty tricks that let you use your favorite, cheaper pods instead.

It just so happens that the large setting on a Keurig machine produces the perfect amount of water for Maruchan Ramen Instant Lunch noodle cups. Simply select the highest setting and pop your ramen right under the liquid dispenser. It should take a few minutes for the noodles to cool off and get saturated. Then, enjoy. 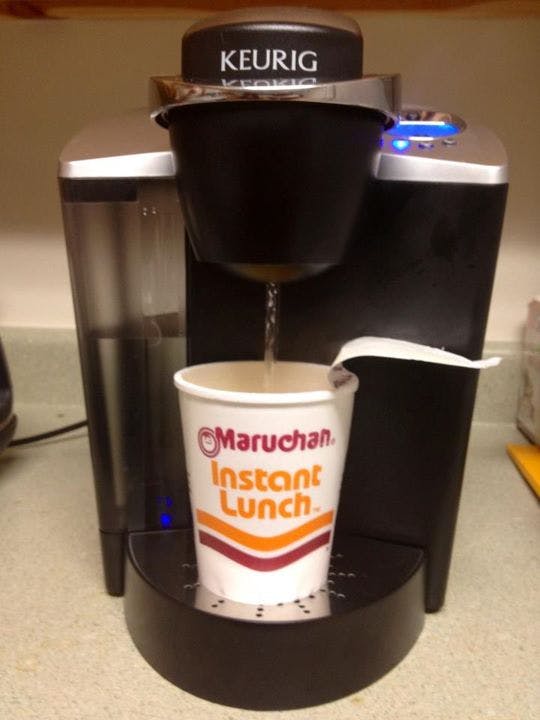 Like instant ramen, instant oatmeal is also devilishly simple to make in a Keurig. Dump the packet of oatmeal into a coffee mug and set the Keurig to produce either a medium or large cup of water. It’s an easy breakfast for dorm room inhabitants who lack access to a microwave.

Chemex pour-over coffee makers have existed since 1941, but not like this. One Redditor created an automated Chemex contraption using Arduino, boilers from old Keurig B70 machines, a water reservoir, and flexible tubing.

Building, configuring, and programming the “Frankendripduino Automated Chemex Machine” takes some serious technical skills, but you can find instructions here.

Ditch the Keurig; use the K-cups

If you’re returning that dysfunctional Keurig but you’ve found yourself with extra K-cups, you can still use them. You’ll need to cut off the plastic around the filter and dump it into a boiling pot of water. This YouTube video shows you how. Just be extra careful cutting the K-cups to avoid puncturing the filter.

Hack the Keurig to use a different pod

Keurig’s new machines are supposed to prevent people from using anything but Keurig-branded coffee pods, but a few intrepid coffee hackers have figured out workarounds to brew their favorite coffee. My favorite comes from Kate Gray, who goes inside the Keurig’s guts to disable the digital rights management. How? By removing the green wire.