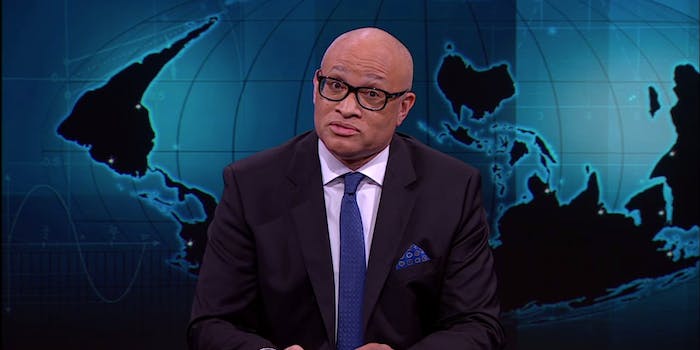 They each make a good point.

As long as cable news channels provide slanted, biased, and even racist coverage of protests in places like Ferguson, Mo., New York, and Baltimore, Jon Stewart and Larry Wilmore will call them out on it.

On a night when they both devoted much of their show to the protests in Baltimore following the funeral of Freddie Gray, a 25-year-old man whose death from injuries suffered while in police custody set off the city’s protests, they touched on different aspects of the story. Stewart focused in on CNN’s terrible reporting from anchor Wolf Blitzer, who lamented that the violence occurring in Baltimore was “hard to believe.” This is after he’s reported on the clashes between police and protesters after Michael Brown’s death in Ferguson last August—and more protests have popped up all over the country since then.

“Elvis leading a herd of orthodox Jewish unicorns through a city street—that would be hard to believe,” Stewart said. “This shit? This shit happens all the time. Ferguson was just a few months ago, and you were talking about it.”

Wilmore, however, chose to focus on how channels like CNN and Fox News covered the protests and how they described black people. Fox News in particular hit the black-stereotype bingo, using everything from calling the protesters thugs, the over-usage of “Black Guerilla Family” (a prominent gang in Baltimore), focusing in on property damage instead of injuries, and other fear-mongering tactics.