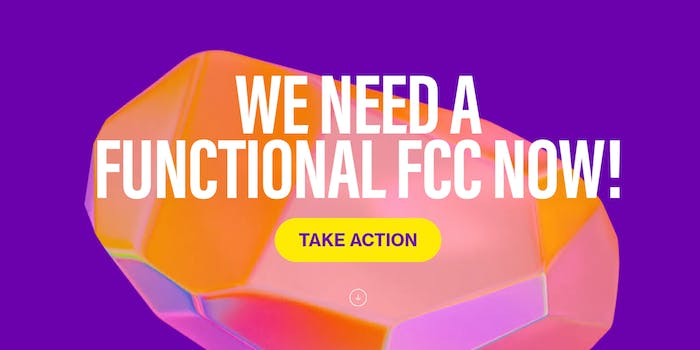 Battle for the Net has long been a hub for supporting net neutrality.

Pressure continues to build for President Joe Biden to fill out the Federal Communications Commission (FCC) with a commissioner so the agency can, among other things, restore net neutrality rules.

On Thursday, a coalition of public interest and tech advocacy groups relaunched its Battle for the Net website, which has been used in the past as a hub to support net neutrality.

The newly-relaunched website urges internet users to sign a petition demanding that Biden choose a fifth FCC commissioner who doesn’t have ties to the telecom industry, supports expanding broadband, and who supports reinstating net neutrality.

The site lists more than 20 groups supporting the effort and will direct their members and followers to the site to sign the petition.

Mark Stanley, the director of operations for Demand Progress, told the Daily Dot on Thursday that the newly relaunched site is meant to showcase a new immediate focus on getting an FCC commissioner without telecom ties and highlight the large advocacy coalition pushing directly for net neutrality restoration.

The FCC currently is down one member and is split 2-2 along party lines. Biden has the ability to name another commissioner to the agency to give Democrats a 3-2 majority. That majority will give Democrats the ability to vote on divisive issues, such as restoring net neutrality rules under Title II of the Communications Act.

The website lays out the future of the net neutrality battle as a three-step process. First is getting a “champion for net neutrality” appointed at the FCC, then demanding that the FCC reinstate the rules, and finally putting pressure on Congress to pass a net neutrality law.

The Battle For The Net website has hosted a number of net neutrality activism pushes, including helping to organize the 2014 Internet Slowdown Day of Action.

“A fully functional FCC will be able to ensure kids can keep learning without being forced to sit outside fast food restaurants, it will be able to start the process of reinstating net neutrality, and it will be able to stop greedy ISPs from imposing data caps and kicking people offline,” Caitlin Seeley George, the director of campaigns and operations at Fight for the Future, said in a statement.

The newly relaunched website is just the latest pressure Biden has begun to face to move quickly on filling out the FCC and shows how momentum is continuing to build for net neutrality restoration.

In January, advocacy groups wrote to the Biden administration and Congress noting that the FCC needed to be at full capacity so that “critical efforts are not stalled in a deadlocked FCC.” The party-line deadlock, the groups said, would leave the agency “impotent to pursue the bold action required at this time would be a serious failing.”

Meanwhile, advocacy groups told the Daily Dot earlier this month that Biden had a “critical opportunity” to choose a public advocate at the agency.

“Americans desperately need a return to an FCC that is an empowered advocate for the public, not the telecom industry,” Stanley, of Demand Progress, said in a statement Thursday. “The Biden administration has a historic opportunity to close the digital divide for millions, ensure net neutrality, and protect consumers against ISP abuses. It is no longer a question of whether broadband internet access is an essential service. It is, and it is critical that Biden’s nominee be someone who understands this reality and supports Title II classification for broadband.”