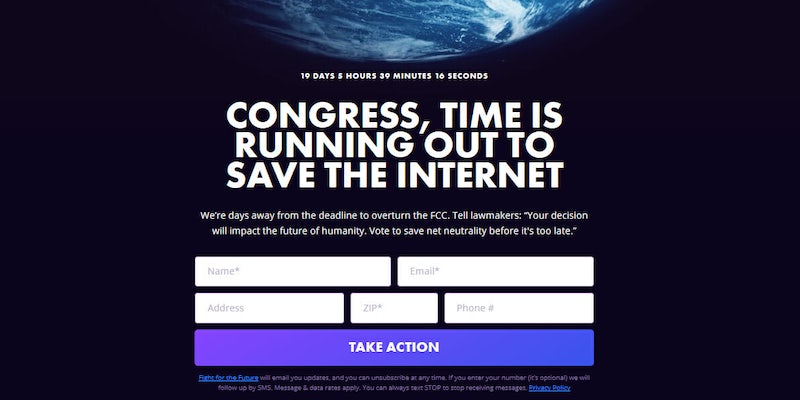 Time is running out, so advocates are making one last push.

Advocates who support net neutrality are planning a “Day of Action” online next week to pressure lawmakers into signing onto an effort in Congress that would overturn the Federal Communications Commission’s (FCC) decision to rescind the rules last year.

The “Day of Action,” launched by internet rights group Fight for the Future, will be the latest in a number of online protests and in-person gatherings net neutrality advocates have hosted in the run-up to the FCC’s vote last year and as Congress has tried to overturn it. The “Day of Action” is scheduled to take place on Nov. 29.

The push will include asking internet users who support net neutrality to call their lawmakers and ask for them to support the Congressional Review Act (CRA) effort that would overturn the FCC’s vote. The Senate passed its version of the CRA earlier this year, but the House version has yet to secure the needed number of votes.

“It’s time for House reps to get off their butts and take concrete action to save the open internet,” Josh Tabish, a technology exchange fellow at Fight for the Future, told the Daily Dot on Wednesday.

“Passing the CRA before the end of this session is Congress’ last best chance to restore net neutrality,” Tabish added. “Next year, net neutrality defenders will still have options, but they’re going to be a lot harder to pull off. So we’re working to drive as much constituent pressure as possible to make sure lawmakers add their name before it’s too late.”

As part of the “Day of Action,” Tabish said people will be able to upload photos of themselves captioned “I support net neutrality” that will be used to flood “lawmakers’ social media feeds with pictures, so if they decide to vote against the open internet we will make them look us in the eye as they do it.”

The campaign also asks for people to sign an open letter to members of Congress, where net neutrality advocates can sign on and leave messages about the importance of the protections.

“The whole internet is watching you,” the open letter reads. “The deadline is fast approaching. You have less than a month to make a decision that will impact the future of humanity: will you vote to restore net neutrality and help save the free and open Internet? Or will you go down in history as one of the politicians who helped hasten its death?”

As of Wednesday, 177 members of the House have signed onto the effort—including one Republican—making the CRA 41 votes shy of the needed 218 votes to get a simple majority.

There will apparently be other efforts within Congress, as well. Rep. Mike Doyle (D-Penn.) told the Daily Dot last week he intended on making a “final push” to pass the CRA.

The House CRA would need to pass before the end of the year.