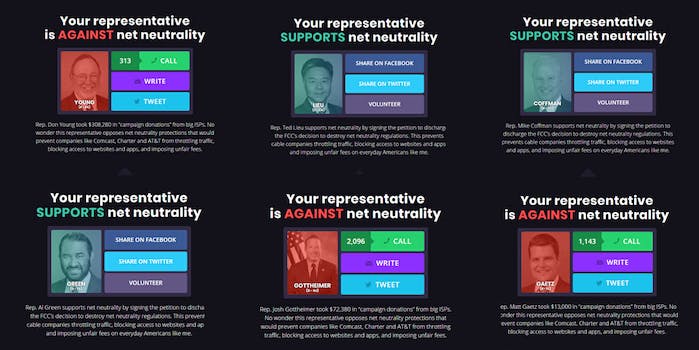 The updated scoreboard can tell you a lot about your representatives and net neutrality.

Internet advocates have updated a scoreboard they have compiled that shows internet users how efforts to overturn the Federal Communications Commission (FCC) decision to rescind net neutrality protections last year are working.

The scoreboard, which has been used in some form for months and was created by a coalition of internet rights groups called Battle For The Net, allows users to select their state and see whether or not their lawmakers have voiced support for the Congressional Review Act (CRA) effort, which needs a simple majority in the House of Representatives to pass. A similar CRA passed 52 to 47 in the Senate earlier this summer.

Currently, according to the scoreboard, 177 lawmakers have voiced support for the CRA, making it 41 votes shy of reaching the threshold needed to pass. Last week, the first Republican lawmaker in the House signed onto the CRA when Rep. Mike Coffman (R-Co.) said he would back the movement to restore net neutrality rules.

The additions to the scoreboard will show internet users how much money representatives have taken in campaign contributions from telecom companies and the number of phone calls their office have received from net neutrality advocates asking for them to support the CRA, according to organizers.

“Some elected officials are still under the woefully incorrect impression that they can hide from their constituents when it comes to net neutrality, or attempt to fool them by supporting symbolic legislation instead of the CRA,” Evan Greer, the deputy director of Fight for the Future, said in a statement. “Any lawmaker who sides with the big [internet service providers] that line their pockets with campaign contributions over the basic internet freedom of their constituents will learn the hard way. The math isn’t complicated: voters overwhelmingly support net neutrality. We’re going to make sure that every single voter knows if their representative sold them out. There’s nowhere to hide.”

The updated scoreboard also shows how many local small businesses have signed onto an open-letter urging their member of Congress to support the CRA.

While there is a push online to get representatives to sign onto the CRA, net neutrality advocates have also staged several in-person protests.

Sally Gellert outside @JoshGottheimer's office in Hackensack, NJ asking for support for the #NetNeutrality CRA in Congress. pic.twitter.com/swlXRrlmDm