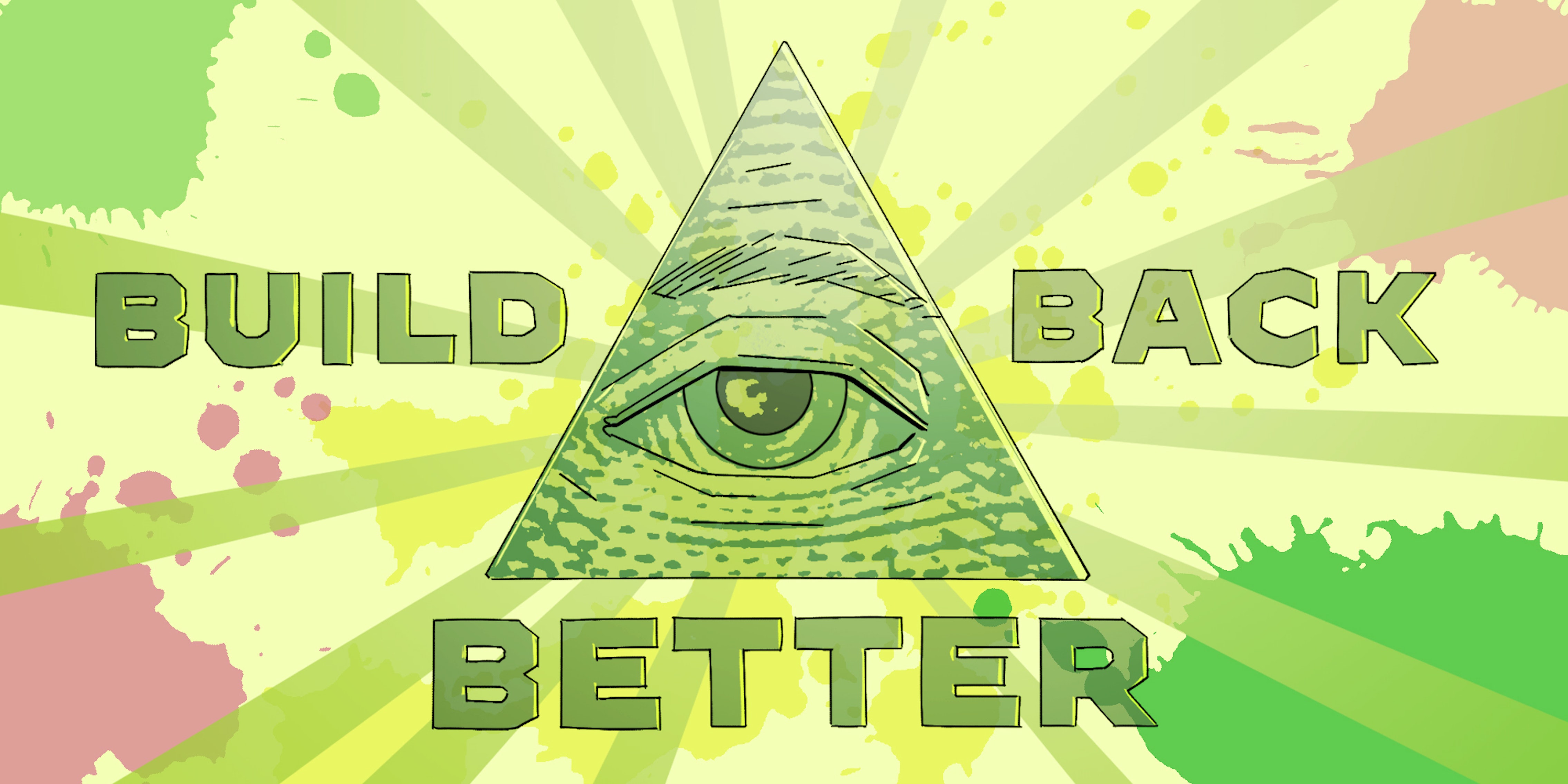 Joe Biden's dream for America is being sank before it even sets sail.

For more than a decade, politicians across the globe have echoed a familiar promise when surveying landscapes battered by storms, scorched by fires, or inundated by tsunamis—that these communities won’t just build back, they’ll “build back better.”

It became something of a standby, a soundbite-friendly addition to any speech referencing an area struck by disaster. Bill Clinton used it regularly. The United Nations adopted it as a tenant of its 2015 disaster risk reduction framework. More recently, Tom Bossert, a member of President Donald Trump’s administration, employed it following Hurricane Harvey.

Today, that same sentence would implicate him as part of a plan to implement a global totalitarian regime, according to those who believe in the “Great Reset.” Just saying the phrase “build back better” can now whip social media into a frenzy, as Canadian Prime Minister Justin Trudeau learned in November. And that’s a problem for President-elect Joe Biden, whose adoption of the phrase as a slogan has opened him up to a continuing series of misguided attacks.

So, how did a clichéd disaster recovery concept get co-opted as a dog whistle for the latest conspiracy theory?

On July 9, President-elect Joe Biden unveiled his economic agenda, delivering a speech at McGregor Industries in Dunmore, Pennsylvania. It was a strategic spot—a small manufacturing company in the battleground state he once called home. In front of locals he’d known for decades, he laid out his intentions to invest hundreds of billions of dollars into clean energy, infrastructure renewal, and encouraging new technologies.

Behind him, a large American flag backdrop obscured the manufacturing company’s machinery. In front of him, a podium displayed the name of his plan: “Build Back Better.”

“That’s what my plan is, to build back better,” he repeated in his speech. “It’s bold, it’s practical, and it’s focused on building an economy for the future, not for the past.”

It wasn’t the first time he’d mentioned the phrase—that was in April—but this time, it stuck. In weeks to come, it would not only grace his podium but become a key line of his speeches, event decor, and the “waiting” screen for his live streams.

The Trump campaign jumped on it early.

Following Biden’s July speech on the economy, the president vaguely accused him of plagiarization.

“He plagiarized from me, but he could never pull it off,” Trump said, without further clarification.

Two weeks later, Tim Murtaugh, Trump’s 2020 communications director, picked up the charge, this time focusing it on “build back better.”

“Last week, Democrat nominee for president Joe Biden delivered an economic speech under the slogan ‘Build Back Better,’” Murtaugh wrote in a commentary piece for Real Clear Politics. “However, Joe Biden didn’t come up with the slogan, the United Nations did. That’s right—Joe Biden and his campaign plagiarized the title directly from a United Nations climate change initiative launched in April.”

It was a pointed choice to tie the phrase to both the international organization and recent climate change policies, considering that it turns up more than 3 million results on Google, has been used by various political figures, and can be easily traced back at least 15 years. In October, the Trump campaign did attempt a third plagiarism attack using another example of it, this time focusing on British Prime Minister Boris Johnson.

“Joe Biden Caught Plagiarizing Boris Johnson’s Slogan ‘Build Back Better’” decried a post from the campaign, just about a month before Election Day and more than two after the initial allegations. An edited video of Biden and the British prime minister side-by-side, both saying the phrase, received more than 20,000 retweets.

But by then, other influential personalities on the far-right had already proposed their own explanation of why Johnson and Biden would repeat the same popular phrase.

In May, Johnson’s use of “build back better” while calling for a “fairer, greener, and more resilient global economy” caught the attention of Breitbart columnist James Delingpole.

As evidence of this international conspiracy, he offered examples of other uses of the phrase by international government leaders and organizations since the start of the coronavirus pandemic. He called its ubiquity “frightening,” only once acknowledging that it has been said long before the COVID-19 crisis and failing to elaborate just how embedded it has been in the field of disaster recovery. He provided no further support for his interpretations of the phrase, which he labeled the “latest code phrase for green global tyranny.”

Following Biden’s adoption of the slogan in July, Fox Business published an article with a thesis similar to Delingpole—but this time, it gave this plan to instill “tyranny” a name.

“A radical movement called the Great Reset embraced by some Democrats poses a grave threat to liberty and free markets in the United States and around the world,” explained Justin Haskins, the article’s author. “While former Vice President Joe Biden hasn’t endorsed the movement, his ties to it are growing as he changes his long-held policy views to appease the far-left.”

Haskins is the executive editor and a research fellow at the Heartland Institute, a conservative think tank known for its attempts to discredit the scientific consensus around climate change. For his proof of Biden’s “ties” to this “Great Reset,” Haskins cites his focus on sustainability and clean energy in his “Build Back Better” proposal. This, Haskins claims, follows the eco-socialist Great Reset playbook the World Economic Forum (WEF) laid out to “destroy the current capitalist system.”

These hyperbolic attacks echo ones both men have made about climate change legislation, such as the Green New Deal, which Haskins once ripped up at CPAC. Imposing them onto “build back better” by cherry-picking uses of it allows them to paint Biden with the same insults they’ve been leveling at more progressive Democrats like Sen. Bernie Sanders (I-Vt.) and Rep. Alexandria Ocasio-Cortez (D-N.Y.) for years. And those claims intensified as the election grew closer.

“The ‘Build Back Better’ name is just too similar to what others affiliated with the Great Reset movement and/or the World Economic Forum have said to be a mere coincidence,” Haskins, now writing for the Blaze, concluded in October, later adding, “Joe Biden is likely an advocate of the radical Great Reset, a proposal that, if enacted, would completely overhaul the world’s economy in favor of more collectivism and the centralization of power in the hands of international elites.”

“Build Back Better is the code phrase for one of the most terrifying and dangerous, globally coordinated assaults on liberty and prosperity in the history of mankind,” Delingpole penned in a piece titled “Only Donald Trump Can Save Us from the Great Reset,” published days before the election.

“If the plan succeeds, the world you inhabit will be unrecognizable, your children will have no prospects and your life will barely be worth living.”

In the weeks following Biden’s election, the Great Reset has become an umbrella for a host of broad, uncoordinated, and often contradictory conspiracies. It’s the topic of multiple Reddit boards and Twitter threads; it’s on Fox News, Sky News, and a favorite topic of numerous conservative and far-right commentators.

Haskins and Delingpole remain vocal on the topic—Haskins recently talked about it with Glenn Beck, while Delingpole has continued publishing columns on it, including one that claims “The Green Agenda IS the Great Reset.”

For Biden, who has pledged to make climate change a priority, this conspiracy adds a layer of nefarious intent behind any such policies he endorses, on top of the decades of disinformation that exist in this space. And, as Biden makes critical decisions around the coronavirus, it puts a target on his interactions with other world leaders identified in this so-called global plan, on the intentions of members of his cabinet who have ever interacted with the U.N. or WEF, and on his economic policies.

The president-elect has not directly commented on the conspiracy and his team has not shied away from the use of “build back better,” which is now the URL of his transition website. And for many on the internet, that seems to be enough “evidence” to tie him to a tyrannical, global plot, setting the stage for his every action in office to be questioned through this conspiratorial lens.

For something as simple as wanting to improve the lot of many Americans, Trump allies in the far-right turned it into an attempt to upend the world, making the massive amount of work Biden will need to do come Jan. 20 borderline impossible, his presidency besieged by another inane conspiracy theory right as it begins.