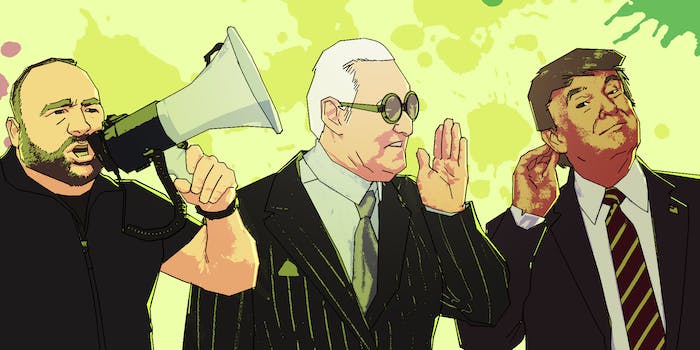 Travel the Roger Stone pipeline: From InfoWars to the White House

Roger Stone and Alex Jones are to blame for all of this.

Back when it was still possible, in 2015, President Donald Trump shocked the internet by attending an interview hosted by one of the most famous right-wing conspiracy theorists. In return, Trump received four years of adulation from conspiratorial fellows, who engaged with and entertained his every single unsubstantiated screed.

It was this public appearance that, though brief, built the foundation of disinformation and internet conspiracies perpetrated by Alex Jones and Roger Stone. It all came in service of a president who led this nation to the precipice.

Jones hosted Trump on his talk show, the Alex Jones Show, in the months before Trump locked up the 2016 Republican primary. The interview brought recognition to Jones and his conspiracy-driven ideas. Ever since, Jones has furiously defended Trump, right up until the very end, even attending last week’s Capitol riot. And it was one key political power broker, Roger Stone, who put the pieces into motion for the Jones-to-Trump pipeline to become a permanent infrastructure.

For Trump, it was a moment to connect with a like-minded figure, unchallenged. Trump had long been a conspiratorial poster, and it turns out the two aligned, especially on the idea that the 2016 election was a “war for the soul of the country.”

“I agree with you. If we don’t get it right this time, I’m not sure if you go another four or eight years with the insanity and the stupidity of these leaders, if you’re gonna be able to turn it around,” Trump said.

That doomsday perspective made Trump the candidate for the people of InfoWars. Jones made his career off of this sentiment. His site’s slogan is: “There’s a war on for your mind!”

And the symbiotic relationship that would soon embark on a 4-year journey can be attributed to one mutual friend.

Roger Stone is an ex-advisor for the Trump campaign and a friend of the president for 30 years. The Republican consultant has made his mark on GOP politics since the Nixon presidency.

It came as no surprise that Stone would make the connection between Trump, a friend and with similar politics, and Jones, a far-right influencer known for blurring the lines between fact and fiction.

Jones name-drops Stone at the end of the interview by describing him as “a patriot, fighting communism all over the world.” At this point, Jones had yet to meet Stone in person, he says.

“Well Roger’s a good guy and he is a patriot and believes strongly in a strong nation and believes in a lot of the things that I believe in,” Trump responded. “He’s been so loyal and so wonderful and he is the one, he really wanted me to do this interview and I’m doing it so.”

It was the very beginning of the public-facing relationship between the three men that lasted throughout the Trump presidency, even though Trump had allegedly fired Stone from the campaign months before.

From then on, conspiracies floated on InfoWars by Jones or Stone were often repeated by the president later on as truth.

And together the two created the festering ecosystem that inspired rioters this month to storm the Capitol. Nearly five years ago, before the 2016 election even happened, Stone and Jones created a “Stop the Steal” movement, alleging Democrats and Republicans would try and take the primary and election from Trump.

On InfoWars, Stone would hype “Stop the Steal,” a website he created. Similarly, Stone tried to encourage people to go to Cleveland for the Republican National Convention to protest any nefarious tricks the party might play on Trump.

As Nov. 8, 2016 approached, the Trump team feared losing as Clinton led in the polls. Stone began to sew doubt in U.S. election integrity by floating the possibility of hackable voting machines. It’s an accusation that sounds all too familiar. And which Trump absolutely bought into.

Trump said he feared the election could be rigged against him at a rally in Ohio. It echoed Stone’s accusations, which he explained in an InfoWars broadcast.

Stone took the idea of an election being rigged and blasted it out to a base primed to believe conspiracies for four straight years.

Jones and Stone positioned themselves at the forefront of the “Stop the Steal” campaign again, which alleges that the 2020 election was also stolen. The three men even blamed faulty voting machines like they did in 2016. It was a recycled plot, but one the audience was ready to buy as they hyped it to a fevered pitch.

Trump never came back onto Jones’ live-streams personally, but the show was catered to his defense. A former InfoWars employee, who wishes to be referred to as Jason, told the Daily Dot that the show well into 2018 was all about Trump.

“(Stone’s) big thing was being Trump’s attack dog. And Alex, I think kind of feels that role too, very defensive and protective of Trump,” Jason said. Together, the two created a formidable media ecosystem where Trump was infallible.

Stone became an official InfoWars contributor in May 2017, although he had been a regular since Trump made his debut.

“Nobody had any idea at that point that this is somebody that would be coming back again and again and again,” Rob Jacobson, another former Infowars editor, told PBS.

As a host of the show War Room, Stone would “debunk” topics like accusations surrounding the Mueller investigation, what InfoWars and Trump banded together to call the “Russian hoax.”

But, it wasn’t just repeating Trump’s rhetoric. Jones and Stone would go after Trump’s political opponents by bombarding the internet with false claims.

Stone revealed this strategy in a recording taken by Jason and reviewed by the Daily Dot at a meeting between Stone and InfoWars’ Rob Dew in October 2017. Stone discussed how he could float claims all the way up to the mainstream media.

“I have to figure out how to get that out, I have a guy that can prove that, I’ve got to get him to the New York Times,” Stone said, hyping a story about how Vice President Mike Pence was working to oust Trump.

It was a common approach for anyone who came in the president’s path. It happened again when ex-advisor Steve Bannon turned on the president during the Russia investigation. The two men hurled criticisms toward Bannon, like when Stone called it a “stunning act of betrayal” on the Tucker Carlson show.

Over the years, Jones, Stone, and Trump clogged up the internet ecosystem with accusatory content on Trump’s enemies.

In 2018, Stone admitted to doing just that. He settled a $100 million defamation lawsuit for spreading lies about a Chinese businessman Guo Wengui on InfoWars according to Business Insider.

Another commonality for Trump’s criticisms came from touting the deep state, a shadowy and intangible entity that nonetheless became a focus for Trump supporters, manifesting itself in the QAnon conspiracy. Jason says Jones’ entire gig was based on inciting fear of a shadow government even before the term “deep state” became popular. In recent years, the far-right has become inconceivably enthralled with the idea that entrenched members of the government are out to get Trump.

Jones began to use the term widely in 2017 to link it to the Russia investigation. And you can see how Stone served as a reliable voice to back deep state accusations for InfoWars followers and float them up to Trump. He filled in as host of the Alex Jones Show to draw connections between Nixon and Trump in May 2017.

“History is repeating itself. What we are seeing in Washington is a repetition of the deep state coup which removed President Richard Nixon from office in 1974,” Stone said.

“Look how things have turned around on the Criminal Deep State. They go after Phony Collusion with Russia, a made up Scam, and end up getting caught in a major SPY scandal the likes of which this country may never have seen before! What goes around, comes around!” Trump tweeted.

Together, the two made it tough to believe anything other than what Trump spouted, creating a fanatical devotion of supporters drenched in delusion. One that still persists, despite any effort to pierce it with facts.