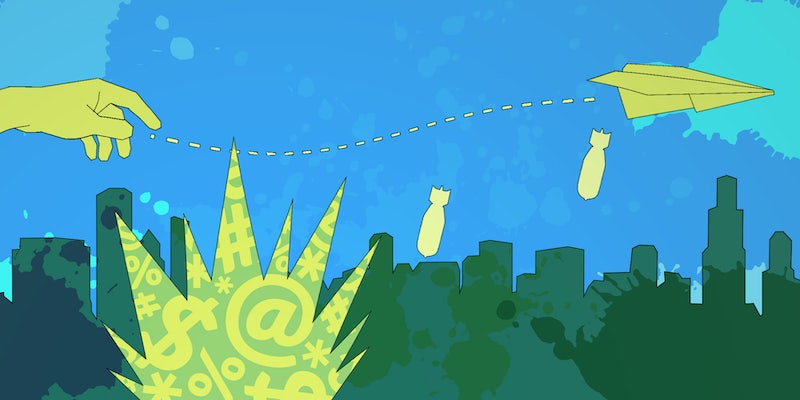 Telegram is supercharging conspiracy theories across the planet

Telegram is exactly the oxygen Trump's lies need to set the world ablaze.

Outside of the Reichstag building, which houses Germany’s parliament, an activist holds a microphone in hand. She stands before a group of demonstrators rallying against coronavirus prevention measures in the country. Into the microphone, she shouts: “Trump is in Berlin, the whole embassy is closed off, we have almost won.”

That evening, protesters at the mass rally overwhelmed police and tried to storm the parliament building. As a result, German lawmakers from across the political spectrum condemned the failed attempt as “unacceptable” behavior.

On that day in August, Trump was not in Berlin. Rather, he was at the U.S. Gulf Coast assessing the damage of Hurricane Laura. In Germany, though, nearly 40,000 people flocked to the streets of the capital with protest signs including: “Please, Mr. President, make Germany great again!”

These protests, as with others Germany has seen over the course of 2020, were organized largely on Telegram. On these far-right German-language groups and channels, Trump is mentioned thousands of times. Messages from his official Telegram channel are forwarded and discussed, as well as his latest speeches.

With the far-right in the U.S. being shuttled off mainstream platforms, into lesser-known spaces, a look at how fast a little lie can whip around Telegram shows that online organizing like what took place before the Capitol riots will not be going away.

And across the world, with nationalist, far-right movements gaining strength, Telegram might help foment insurrections across the globe.

Telegram, a free encrypted messaging app, allows users to communicate either directly, in groups of up to 200,000 people, or to follow channels that allow people to broadcast messages to large audiences. The service stands out against other messaging platforms not only for its privacy features but also for its “anything goes” terms of service, only stipulating that illegal content should not be posted to “publicly viewable Telegram channels.”

With few restrictions on what can be shared on the platform, Telegram appeals to people who feel censored elsewhere. Coupled with end-to-end encryption—which theoretically prevents Telegram from viewing or moderating content even if it wanted to—the platform creates a safe haven for false information, propaganda, and extremists, resulting in experts calling such messaging services the “future of propaganda.”

With a custom tool built using Python and access to Telegram’s API, the Daily Dot analyzed over 46,000 messages from more than 5,000 Telegram channels, demonstrating just how strong Trump’s influence is on Germany’s far-right. Mapping out forwarded messages by visualizing the data in Gephi reveals tens of thousands of clear links between U.S. disinformation and German far-right media and commentators.

Further analysis shows other connections further afield. While channels from over 34 countries are included, U.S. channels (including Trump and his family, U.S. far-right commentators, and QAnon groups) represent the strongest connections. On average, individual German far-right influencers have followings in Telegram ranging from 40,000 to 120,000 people.

Connections between where messages are forwarded provides an overview of how often Trump makes it into the conversion. Delving through the content of individual channels to see how he is discussed paints a more complete picture.

“TRUMP is TRUE, CONSTANT and PATIENT. This is his strength and his magic. Trump, Allianz and Q’s plan has been running for over 30 years and is being implemented precisely, domino by domino,” one message reads, in German.

Members of one group discussed a speech regarding coronavirus Trump gave at a rally on Oct. 29, 2020, saying: “Germany is doing so well, France is doing so well, everyone’s doing so well. No, they’re not doing well. And you take a look at what’s going on. And we want the best for them, we’re on their team. We want to work with them and everything else, but they’re not doing well. They’re spiking up big, they’re shutting down, they’re locking down. I disagree with that because we’re never going to lockdown again.”

The speech was paraphrased and mistranslated, with users adding that Trump said he wanted to “help Germany.” To that, replies read: “I’m breathing a sigh of relief” and “That’s soooo good to hear… my mood has just risen.”

“Learn to think positively, Trump is on our side,” the messages that helped spawn the protest read, some delving into Trump as diety. “Nobody in his position would have done such a job if it hadn’t been for something spiritual,” one person replied. Another said: “If Trump really fights the Deep State, he of course has to take Germany with him! Or to whom do you think Merkel and her friends belong?”

Just as Trump’s speeches are shared and translated, conspiracy theories are also imported. One protest in Germany was organized largely around “saving our children” after a disproven theory alleging New York children developed lung infections from masks was translated into German, instead alleging these cases happened in Austria.

“What jumps out to me as an important facet is that far-right Germans are leaving their language bubble. That is huge,” Elizabeth Schumacher, a journalist who has been tracking the German far-right for over half a decade, tells the Daily Dot. “Since WWII, the German far-right has been hounded out of the public square. This is them saying ‘Hey, we’re not crazy, there are so many people like us in the U.S., let’s come out of hiding.’”

One German-language Telegram channel asserting Trump himself is Q, the originator of the QAnon conspiracy theories, has over 40,000 members.

QAnon is the baseless conspiracy that a member of Trump’s inner circle has been leaking information about satanic pedophiles in government who need to be outed and executed. QAnon had a large presence at the Capitol riot last week.

Another, with over 36,000 members, mentions Trump nearly 8,000 times, including repeating the 45th president’s false claim that injecting bleach protected against COVID-19—which Trump later said was sarcastic.

“Trump has surely influenced the media discourse in Germany,” Lena Frischlich, an interim professor for media change at the University of Munich, said to the Daily Dot. “The far-right observes each other, but also learns from each other.”

The interconnection of far-right sympathizers globally can be explained not just through ideological agreement, but also through common identity and a desire for continuity. From a psychological standpoint, this “consistent explanation can provide us with a sense of control, reduce uncertainty, and promises to fight our anxieties” Frischlich said, “when large, significant events happen, explanations that are small or banal are often unsatisfying.”

One part of this common identity is being part of a community that subscribes to the same beliefs. With many on the political right believing that major social media platforms are biased against them, services such as Telegram allow users to connect with like-minded individuals and with impunity.

Even as Trump leaves office, the connections fueled by his rhetoric continue to thrive. Those brought together in these Telegram groups support each other in pushing back in the name of personal freedom, the supposed “deep state,” and control by those who they allege are “corrupt politicians.”

And with no check on them, they’ve been left to run amok. It isn’t hard to see how a rally like the one in Germany could just as easily turn violent. In the U.S., it’s already happened.

Thanks to Telegram, there’s no sign it’s slowing down.

Jordan Wildon is a digital culture reporter based in Germany. He specializes in online investigations, often covering disinformation, conspiracy theorists, and the global far-right.