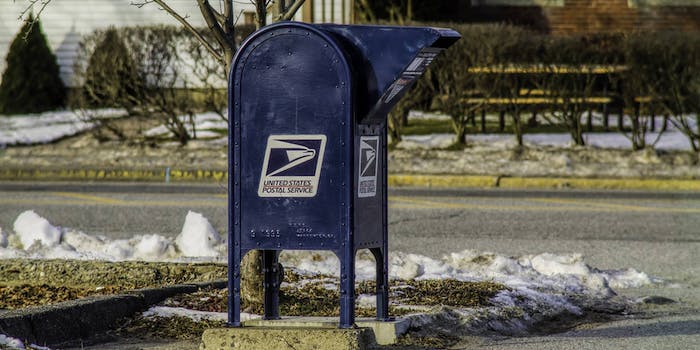 The former president said he uses the post office to avoid surveillance. If only it were that easy.

Former President Jimmy Carter said on Sunday that he uses “snail mail” to dodge the NSA. “As a matter of fact, you know, I have felt that my own communications are probably monitored,” Carter told NBC’s Meet the Press. “And when I want to communicate with a foreign leader privately, I type or write a letter myself, put it in the post office, and mail it.”

But it turns out, the United States Postal Service isn’t as secure as the 39th U.S. president might believe. Law enforcement is tracking Americans’ analog communications, too.

Perhaps Carter failed to read up on the Mail Isolation Control and Tracking program (MICT) before singing the praises of snail mail. Here’s a little history: After 9/11, a brief flurry of letters containing Anthrax took the lives of five people, including two postal workers. To better track any such “terrorist” mail in the future, law enforcement asked USPS to give them access to MICT. The program’s existence surfaced in June 2013, after the FBI admitted to using it in the tracking of letters containing ricin that were sent to Michael Bloomberg and President Obama.

In response, United States Postmaster General Patrick Donahoe told the Associated Press last August that MICT is used to better sort mail, ensure delivery, and otherwise maintain postal efficiency. As Donahoe noted, images are kept anywhere from a week to 30 days, and are made available upon request to law enforcement.

Moreover, MICT isn’t the only method of tracking mail. In July 2013, the New York Times published an article on Leslie James Pickering, a former spokesman for the Earth Liberation Front member who was being tracked via “mail covers,” the predecessor to MICT.

Pickering discovered he was being tracked when USPS accidentally sent him a handwritten card instructing postal workers to keep an eye on any mail or packages sent to his home. His former association with ELF—often described as “eco-terrorists”—was clearly enough to trigger a red flag at the post office.

Read the full story on Motherboard. Photo by Jody Roberts/Flickr (CC BY 2.0)