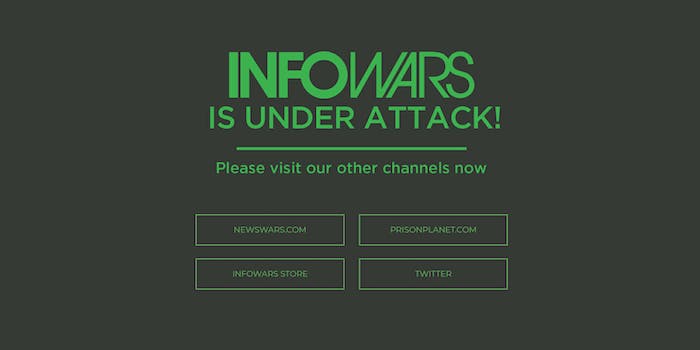 InfoWars is down, and Alex Jones has a conspiracy theory why

Some people aren't buying it.

The website for InfoWars is down as of Tuesday afternoon, with some staffers of the site claiming it is “under cyber attack.”

On Tuesday afternoon Paul Joseph Watson and Alex Jones both tweeted that the website for InfoWars—which has been taken off several social media and tech platforms in recent weeks for violating terms of service—was down.

“infowars.com is under attack,” Jones tweeted. “This is a criminal wave of anti-American, anti-free speech groups dedicated to destroying conservative and national speech ahead of the mid-terms. Everyone is in danger! This is true #authoritarianism. #1A #FreeInfowars.”

“http://infowars.com  IS DOWN. The #ChineseCommunist / #Democrat / #DeepState war to deplatform infowars just went to a new level. After being targeted for weeks, our #1A is in great peril! Get the info at http://newswars.com and http://prisonplanet.com.”

Meanwhile, Watson–InfoWars’ editor-at-large—claimed the website has been “under cyber attack” since social media websites began de-platforming the site’s content.

“Infowars.com is down again. We have been under cyber attack for over a week since Big Tech launched its purge.”

https://t.co/DHRJw8KFgr is down again. We have been under cyber attack for over a week since Big Tech launched its purge.

While the website initially linked back to an old snapshot of the page, it quickly switched to a page that claimed it was “under attack” and linked out to other places people could find InfoWars content.

Watson also claimed that the website was down on August 11 after a “likely Denial-of-service attack (DDoS).”

It’s unclear why InfoWars is down as of Tuesday afternoon. While some staffers were claiming it was “under attack,” others speculated it could have been done on purpose.

InfoWars appears to be under some kind of attack.

My suspicion: It's an inside job.

The website not responding comes on the heels of a number of social media and tech platforms banning Jones and his website from hosting content on their platforms.

A protest has begun online to pressure Twitter to do the same after it said last week that the website was not violating its rules.