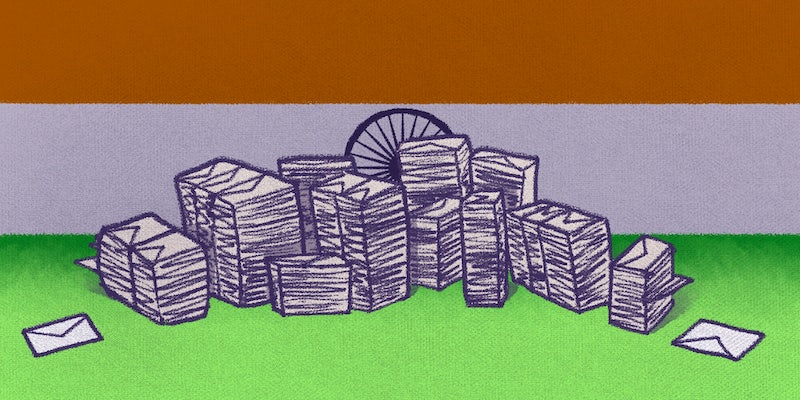 Net neutrality has a new battleground.

Months after a similar, successful campaign in the U.S., a self-described collective of some 50 “geeks and enthusiasts” in India has created a movement to preserve net neutrality for themselves.

And just as the activists who convinced the U.S. Federal Communications Commission did so with a flood of messages, savetheinternet.in can confirm at least 938,878 emails have been sent to India’s own independent regulatory body, the Telecom Regulatory Authority of India. The site only counts emails to TRAI that are bcc’d to its own email address. So like American activists’ messages to the FCC—of which some four million were counted, but many were not—the real number is likely far higher.

“This consultation process has now made history,” Nikhil Pahwa, one of the activists behind the effort, told the Daily Dot. “Never in the history of India has a consultation received this many submission. The best that this regulator has received in the past, from what I’ve seen over the last eight years, is less than 500.”

The debate in India is similar to that in the U.S., in that concerned activists don’t want Internet service providers to be able to charge customers extra to access particular sites at full speed. But they’re also concerned about the issue of whether Internet companies should be forced to buy a license to operate in India.

The group even has its own John Oliver—comedians who can reach the masses with a simultaneously funny, informative, and alarming video. Created by the troupe All India Bakchod, this clip has been viewed more than 2.5 million times.

Like with the FCC’s comment deadline period—it accepts comments anytime, but specifically requested ones on net neutrality for a spell of several months in 2014—TRAI is accepting comments on its latest paper through Friday.