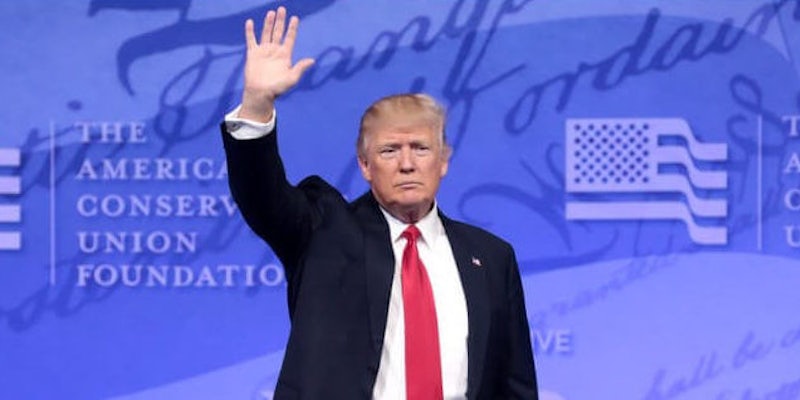 What is the #ILeftTheGOP movement?

It's mostly about Trump.

Yesterday’s bombshell revelations about a leaked draft of John Bolton’s book, in which he wrote that President Donald Trump wanted to delay aid to Ukraine pending its investigation of the Bidens, has inspired the hashtag #ILeftTheGOP. Former Republicans are using it to share their reasons for leaving the party.

The phenomenon is similar to the 2018 #WalkAway movement that featured purported ex-Democrats detailing their reasons for leaving the party. The movement quickly attracted the Kremlin’s notice, who put its army of trolls to work boosting the hashtag.

Pundit Cheri Jacobus appears to have started the #ILeftTheGOP trend with a pair of Sunday night tweets, the first responding to USA Today’s Sophia A. Nelson’s comment wondering if Republican senators would step up or fall in line in light of Bolton’s allegations.

Jacobus’s call to action quickly caught on. Thousands flocked to Twitter to share their stories about leaving the Republican Party.

Common themes to the reasons given include realizing that the party caters to the wealthy, becoming disillusioned with it during the second Iraq War or over its handling of Trump’s impeachment, concerns about its embrace of white nationalism and other forms of bigotry, and other issues with Republican policies and the conduct of its elected representatives.

Some of the tweets are heartbreaking, a few are amusing, but most convey disgust and resolve.

It is, however, unclear if people posting are actually former Republicans, or just people using the hashtag to criticize the GOP.

#ILeftTheGOP when my high school friend came back in a body bag from Iraq.

My grandmother had a saying about people who wear their religion on their sleeve. It is on their sleeve because it is NOT in their hearts. She was a holocaust survivor. #TheGOPisDEADtoME #ILeftTheGOP https://t.co/tRWtZ1qsPv

#ileftthegop after Nixon. Reagan, the smiling actor who ran for office on racist dog-whistles, while promising wealth to the oligarchs, solidified that Eisenhower Republicanism was long dead and gone.

#ILeftTheGOP after 5th grade when I learned that Democrats weren’t actually running around murdering other people’s babies in cold blood and that abortion meant terminating a pregnancy.

#ILeftTheGOP Because they unfortunately are convinced the earth is flat. pic.twitter.com/rsi0FVIxmq

#ILeftTheGOP in the 80's when they created the tip tax and cost my waitress mother money.

By and large, however, the prevailing reason given for leaving the GOP is simple: Trump. In tweet after tweet, self-proclaimed former Republicans write that they left the party because of Donald Trump.

Trump’s presidency has inspired numerous Republican representatives to decide against seeking re-election and led others to switch parties.

I officially changed to a Democrat during the 2016 election. I will never go back after all they've done to our country! #ripgop #ILeftTheGOP

#ILeftTheGOP in 2016 when a man who sexually assaults women was overwhelmingly supported by white evangelicals; the community I grew up in.

I love Jesus but I’m still grieving losing not the election, but my Christian family to another “King.”

Conservatives, meanwhile, pushed back against the hashtag, at times in questionable fashion.

“I just heard whoever started the #ILeftTheGOP on Twitter hashtag has a severe form of herpes,” wrote radio host Wayne Dupree.

I just heard whoever started the #ILeftTheGOP on Twitter hashtag has a severe form of herpes.

don't get angry at me, I was just passing along the information.

This platform silences conservative voices and boosts liberal voices because the can.
This hashtag is a perfect example.
#ILeftTheGOP

It remains to be seen whether the alleged exodus of Republicans affects the upcoming election.

“I just hope everyone who says #ILeftTheGOP is registered to vote and ready to flip the script in November,” tweeted author John Pavlovitz.