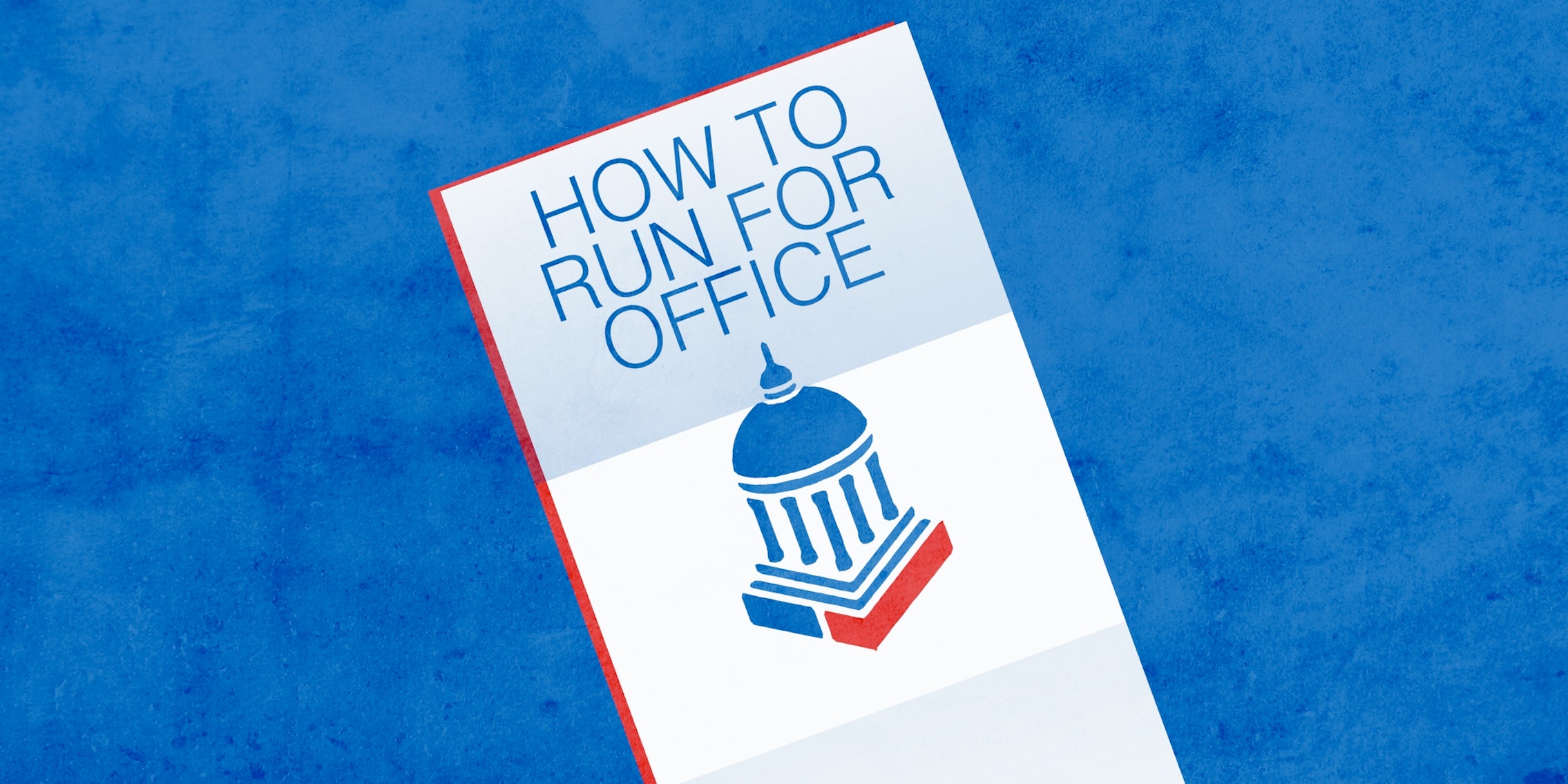 Getting started in the political process isn't easy. That's where RunForOffice.org comes in.

Were it not for a new website, the citizens of Upland, California, might not be able to vote for Janice Elliot this November.

After nearly two decades as an elementary school teacher, Elliot started volunteering at the Upland Animal Shelter in San Bernardino County, California, a few years ago. When a new dog came into the shelter, Elliot could often see the fear in its eyes. She enjoys socializing dogs as they came in and helping them get comfortable in their new, hopefully temporary, surroundings.

When the Upland City Council began talking about cutting the group’s funding, Elliot, who started her professional career as a certified public accountant, leaped into action, attending city budget and financial committee meetings to advocate for the shelter. “It was getting its financing through the city for many, many years, and they were contemplating a severe budget cut,” Elliot explained. “I was interested in the shelter, attended the budget meetings, and then became an advocate for the shelter at the city council meetings.”

The city ended up cutting funding to the shelter to the tune of $350,000. While Elliot insists the shelter has made do with the cuts and continues to thrive, the whole process revealed to Elliot a whole new world of local politics—one she realized could benefit from her accounting experience, years of public service, and ability to balance an liberal’s commitment to environmental conservation with a conservative’s eye for fiscal restraint.

That’s when she decided to run for Upland City Council.

As a CPA, Elliot is used to dealing with government bureaucracy. It takes persistence, attention to detail, and most of all, patience. But getting started in the political process isn’t always easy. Getting on the ballot takes more than simply deciding to take the plunge. There are candidacy declaration forms to fill out, filing fees to pay, and residency requirements to meet.

Most elections in the United States are handled at the county level. There are just over 3,000 counties in the U.S., meaning there are just over 3,000 different ways in which elections are run. Sometimes candidates need a set number of petition signatures to get on the ballot. Other times, the filing period is restricted to the span of a single week. Get it wrong, and you have to wait until the next election cycle.

That’s where RunForOffice.org comes in. The site uses your home address to track down all of the necessary paperwork and background information on the offices open to election. Elliot didn’t find the process particularly burdensome, but she could easily see how others could have had a considerably more difficult time.

“I used [the site] at the very beginning when I was first thinking about it,” Elliot confirms. “It directed me to the San Bernardino County’s voter information page. From there it was really easy to for me to get information. … It was helpful.”

“[Officials] frequently wouldn’t even want to give you the information because they wouldn’t want you to run because the party would want to ensure that only the people that they want to run are actually going to run,” Gilliam said. “It’s a huge information asymmetry problem. The information was just not out there.”

Locating and compiling all that data is no easy task. RunForOffice.org recruited a network of over 60 volunteers and interns—largely from partnerships with colleges like the University of Washington and University of Southern California, as well as alumni of Bernie Sanders’s presidential effort—to dig through the websites and databases of municipal governments to find all requisite information necessary to run for office. Sometimes the process even involves calling up county clerks’ offices and bugging staffers to get the data they need when the info isn’t located anywhere online.

When the site launched in June, there were 24,000 elected offices in the database. Since then, another 10,000 have been added. The result is a system where anyone can simply enter in their address and watch a list with every potential political office they can run for pop up, along with all the accompanying details about how to do it.

Here’s what would come up if President Barack Obama started getting antsy about his political future. 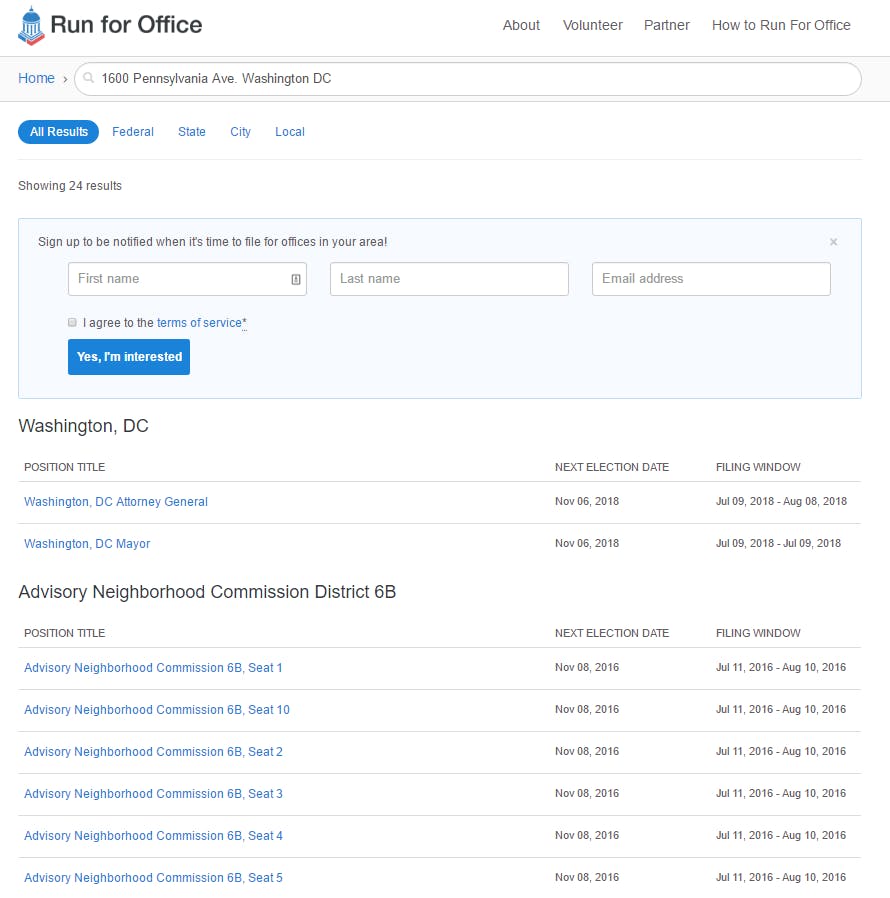 Users can dive into one position in particular and get some background about what it is that job actually entails. 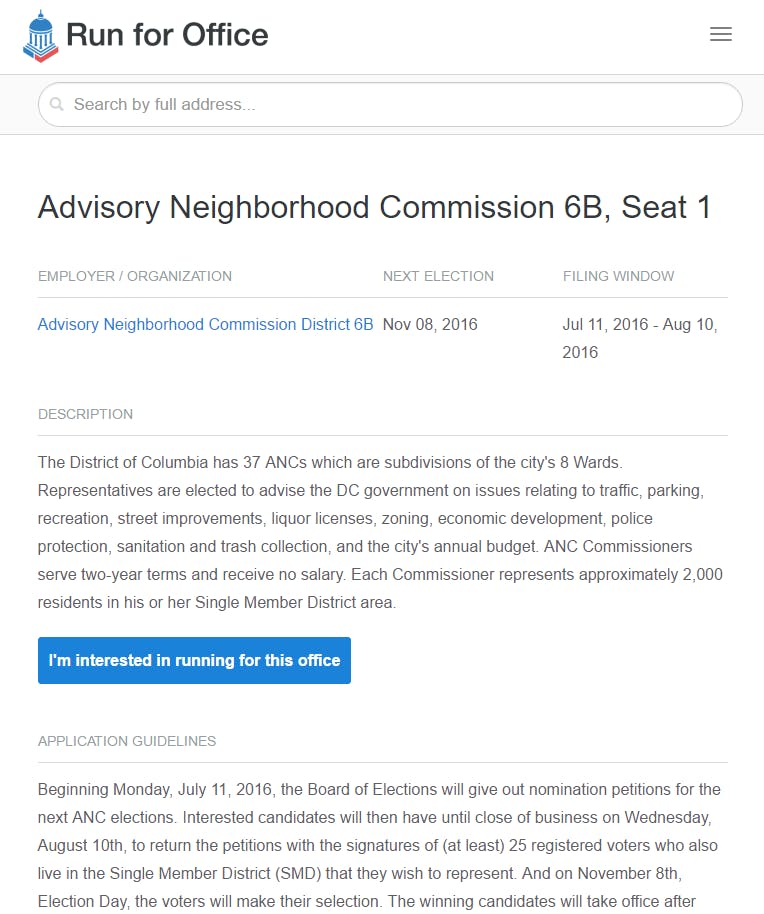 There’s also information about the application process, as well as the ability to schedule a conversation with a “community strategist” who can go over a lot of the questions first-time candidates may have. 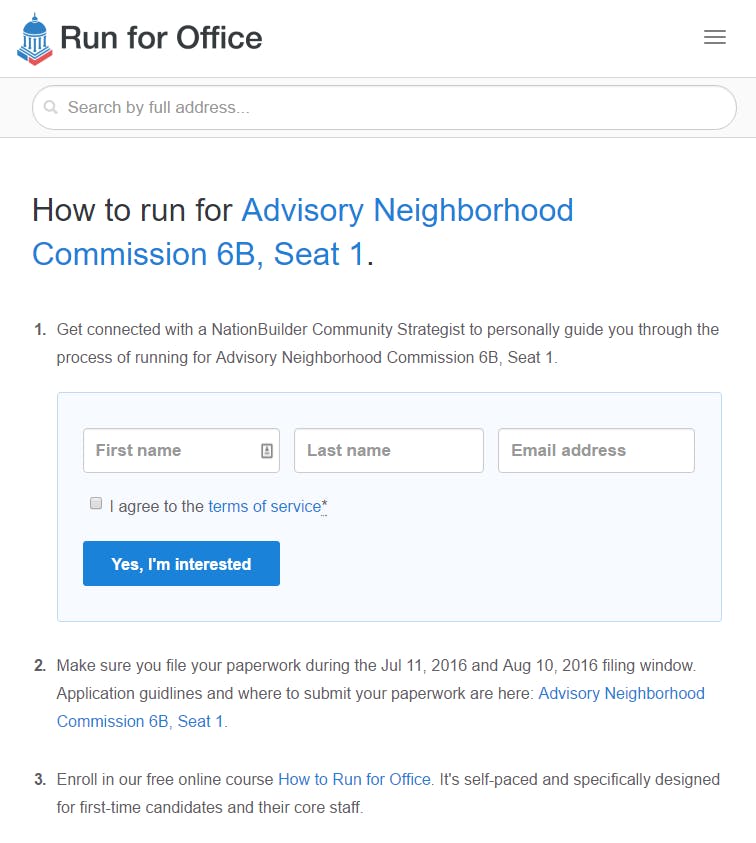 RunForOffice.org isn’t Gilliam’s first political endeavor. He co-founded Brave New Films with lefty director Robert Greenwald, who employed the production company to release documentaries like Outfoxed: Rupert Murdoch’s War on Journalism and Walmart: The High Cost of Low Prices. Gilliam’s main gig is as the CEO of NationBuilder, a company that produces software that allows political campaigns to track voters, manage voters, solicit donations, and do many of the other essential things that act as the lifeblood of a 21st century political operation.

NationBuilder is targeted at small, local campaigns like Elliot’s, even if it’s also used by massive political machines like the U.K.’s Labor Party. The service starts at $29/month, and scales up depending on the number people a campaign wants to track.

If Elliot, for example, wants to use NationBuilder as a soup-to-nuts solution for her candidacy, Gilliam suggests she could do something like start a petition on an issue about which she is passionate—restoring funding to the animal shelter—and then tap into that support base of signatories for volunteers to knock on doors and donations to pay for yard signs during the campaign. All of that, from mapping the walking route for volunteers to keeping track of donations, can be handled through NationBuilder.

There’s a bevy of similar campaign data management services—the NGP VAN system that’s closely associated with the Democratic party being the highest profile. Gilliam’s goal is to have NationBuilder leverage the obvious utility of RunForOffice.org to become the go-to service for political upstarts like Elliot.

It’s also something that Gilliam hopes will become self-sustaining in future election cycles. “This is meant to go way beyond the 2016 election,” he said. “The 2016 election is just a really great opportunity for us to recruit volunteers to really help because politics is really on everyone’s mind, but local politics happens constantly all the time. There will be a bunch of elections in March, a bunch of elections in May of next year all over the place.”

Gilliam envisions a future where municipalities post all their elected offices on RunForOffice.org, much like employers put their available job postings on career sites like LinkedIn or Monster.com, “because that’s how they can get their information out in an effective way.”

For Gilliam, the power of communities to organize online has a special resonance. When Gilliam needed a double lung transplant, a community of people came together to pay for the expensive procedure. “I’m literally alive because of communities and organizing,” he explained. “I wanted to figure out how to make it possible for everyone to create what they’re meant to create in the world.”

No one gets elected in a vacuum. Political campaigns are, at their core, exercises in organization. With RunForOffice.org, Gilliam believes he can streamline the process. “The internet creates unprecedented opportunity to [make a difference],” he said, “but you’ve got to be able to organize to make that happen.”