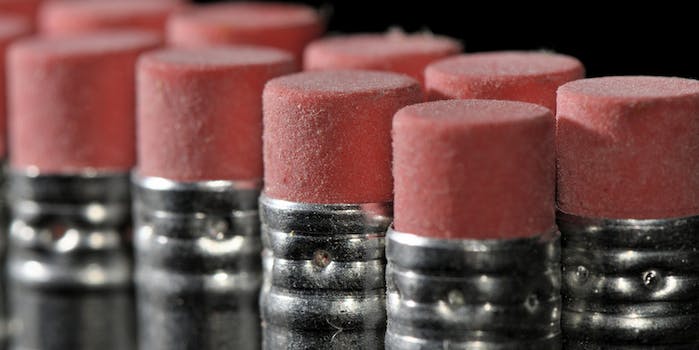 Here’s how Google will enforce the ‘right to be forgotten’

Google will flag takedown requests in its biannual transperancy report.

Despite its opposition to the ruling, Google has already taken a number of steps to conform to a European Court’s decision requiring the the company to observe EU citizens’ “right to be forgotten.”

Since the EU Court of Justice ruled last month that Google and other search engines must remove personal information about private citizens that is “inadequate” or “irrelevant,” the search giant has already been inundated with more than 41,000 takedown requests. Google has also announced new details about how the deletion process will work.

According to Arstechnica, Google will flag censored content and notify users of changes similar to the way it does with copyright takedown requests. The company will also place such notifications at the bottom of Web pages that once contained links to the deleted content.

Additionally, statistics about “right to be forgotten” takedowns will be included in the search engine’s biannual transparency report, where Google regularly reports takedown activities.

A Web form is already in place for citizens of the European Union to request deletions, however the requests will not be handled automatically by Google algorithms. Each request will be reviewed by a human to determine if the complaint rises to the legal standard set by the court.

The court based its landmark ruling on the French legal concept of le droit à l’oubli – or the ‘right of oblivion’ – which historically has said that convicted criminals who have served their time and been rehabilitated can object to the publication of facts about their criminal history or incarceration. The EU court felt this concept applied in the case of a Spanish man who filed suit to have Google remove the link to a 1998 newspaper notice about the forcible auction of his home.

The right to be forgotten is now law in Europe, but it’s a prickly issue in the United States, home to many of the tech giants affected by the court’s decision. When it comes to this issue, George Washington University Law Professor Jeffrey Rosen writes that first amendment rights to freedom of speech and press tend to reign supreme in the United States. From that perspective, the right to be forgotten is seen as a form of censorship.

However, Google is forced to comply with the ruling for European citizens if it wants to stay in business on the other side of the Atlantic. Still, it’s not a ruling everyone associated with Google is happy about. To deal with the implementation of the ruling, Google has created an advisory committee that includes Wikipedia co-founder Jimmy Wales, who staunchly opposes the right to be forgotten. In an interview with TechCrunch over the weekend, he called it a “terrible danger.”

“There is no ‘right to be forgotten’ – there is apparently a ‘right’ in Europe to censor some information that you don’t like,” Wales said.