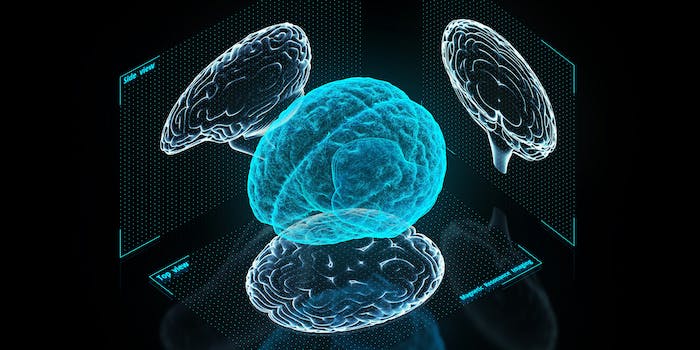 Scientists figured out a way to implant holographic brain images

The experiment invites comparisons to science fiction—and the fears that this technology will inevitably be used for mind control. But are they valid?

Sure, you may be a fan of Ready Player One or Westworld, but would you put your brain into the hands of scientists who can create immersive worlds and even trick your mind into thinking these images were real? In April, researchers at UC Berkeley announced an essential first step in simulating false sensations in the human brain that are so real, our brains may think we experienced them IRL.

In their paper, “Three-dimensional scanless holographic optogenetics with temporal focusing,” published in Nature Communications, researchers Nicolas C. Pégard, Alan R. Mardinly, and Ian Antón Oldenburg (with supervision by Hillel Adesnik), detailed how they hacked into the brains of lab rats to create such false imagery. They used flashes of laser lighter on the brain to activate or suppress individual neurons. In doing this, the researchers were able to simulate patterns that mimic brain activity.

The Daily Dot spoke with Mardinly and Oldenburg on a call to understand exactly how this was done and if we should be even more scared of the future than we already are. First, mice were placed in something called a “spatial light modulator.” The device, which Mardinly described as “the size of a car;” holds a microscope, several lasers, and a treadmill that the mouse is strapped to while awake. Using the spatial light modulator’s lasers, the researchers were able to pinpoint bundles of neurons in the mouse’s somatosensory cortex up to 300 times per second. Though the lasers couldn’t go very deep, the researchers were able to display visual stimuli in the form of holographic obstacles, which the running mice actively tried to avoid.

The technology that Mardinly, Oldenburg, and Pégard used to generate the holograms is “3D scanless optogenetics with temporal focusing” or 3D-SHOT. A liquid crystal screen acts as a photographic negative, but for holograms. Using this negative, the scientists shape lasers into 3D patterns of their choosing, inside the brain. Then, laser pulses are shot out every microsecond in bursts in order to maintain the hologram.

How did the researchers know that the mouse’s brain was effectively “tricked”? Mardinly put it this way: “At the same time we were writing in activity, using our holograms, we were able to watch and to see the neurons flash. So we have some ability to see. As I’m writing a specific pattern in, I’m also reading.”

The scientists also recorded video footage of what they were seeing inside the mouse’s brain. Activated neurons glow fluorescent green, while the purple arrows indicate the laser light activating them.

But it wasn’t 3D-SHOT that wowed the science world when the study was published. “We combined existing technology that led us to ask the scientific questions we want,” explained Oldenburg. The team’s resourcefulness led them to the study’s breakthrough: the ability to target and fire specific neurons without causing neighboring neurons to fire.

“We knew that each neuron has its own distant goal that it’s trying to achieve and in this particular pattern,” Oldenburg explained. “But unless you can get in there and write a pattern to one neuron and not its neighboring neuron, you don’t really have the ability to ask questions about what was going on and what these different patterns mean.”

For some observers, the experiment invites comparisons to science fiction—and the fears that this technology will inevitably be used for mind control or emotional manipulation.

The researchers push back against this kind of thinking. First, just because a mouse can do it, doesn’t mean a human can. “We’re limited to the very surface of the brain, and it doesn’t work outside a mouse right now,” Oldenburg said. Mardinly jumped in: “Currently when the human brain is stimulated, like in brain surgery, you get this thing called a phosphene, which is the idea of the feeling of indiscriminate flashing lights.”

The scientists are a long way from having the ability to shape these phosphenes into anything besides nonspecific light shapes. Mardinly explained: “Maybe, you could use this [method] to write in something more specific, like a line, or a color. In the end stage of this imaginary technology, you could write a more specific scene. But that’s far, far away.”

As for using their powers for evil instead of good? In the weeks since the paper’s release, Mardinly said he’s seen all manner of comparisons to government conspiracies. But, he assured me, “I can’t imagine an illusion so powerful, you don’t know you’re in it. I think that’s sort of hard for me to imagine, even when I’m thinking about science-fiction scenarios.”

Oldenburg added: “There are various physical limits that will restrict how small you could ever make this setup, this microscope. You’re always going to know that you’re in the apparatus.”

The scientists are optimistic about the practical advances that could come from their research. “Ideally this would be used for therapeutic value,” Mardinly said. One possibility is renewed sensory perception in a prosthetic limb. One major obstacle creating prosthetic limbs that can send and receive feedback from the brain is the fact that the brain cannot interpret neuron activation patterns from outside sources. Someday, this technology could make brain-controlled prosthetics possible.

Oldenburg mentioned that if human subjects were permitted, researchers may be able to change how we perceive touch sensations. It’s not a Matrix-level immersive environment, but, “If you know what one object feels like, it might feel slightly like another object. Maybe it tingles like pins and needles.”

While I’m sure we’re all dying to try this neuroscientist version of a Halloween “feel box,” I wanted to know the answer to a more important question: When will these lasers be able to Eternal Sunshine us? “Far, far, in the future” Mardinly told me. I probed further. “Generations from now,” he sighed. One thing’s certain; while we humans walk the Earth certain that what we’re seeing is real, there are mice somewhere in a lab freaking out at imaginary 3D shapes lasered into their brains.