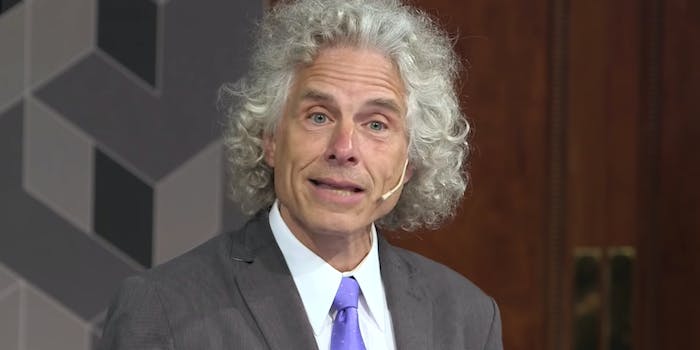 People online are now posting the screenshots of their Pinker blockings as some sort of badge of honor.

Steven Pinker, a cognitive psychologist and linguist based out of Harvard, is apparently blocking Twitter users who mention his name alongside deceased convicted pedophile Jeffery Epstein’s.

People online are now posting the screenshots of their Pinker blockings as some sort of badge of honor. “I’m worried that if @sapinker doesn’t block me soon, everyone on academic twitter will know I’m not cool,” one Twitter user wrote of the alleged blocking spree.

Some are speculating—and testing out the theory—that Pinker’s account is auto-blocking users who mention his and Epstein’s name in the same tweet.

Jessica Cantlon, a professor at Carnegie Mellon University who was recently blocked by Pinker, laid out in a thread on Wednesday her past critiques of Pinker, dating back to 2019.

“The main problem with Pinker is that he used his status at Harvard and position as a linguist in a twisted legal assist for Jeffrey Epstein — a defense that allowed Epstein to rape more kids. @LingSocAm should care about corruption in deciding who to honor,” Cantlon tweeted in July of 2020.

In 2019, BuzzFeed News examined Pinker’s connection to Epstein: his involvement in Epstein’s first criminal case, which he has since said he regrets.

“Though I did this as a favor to a friend and colleague, and not as either a paid expert witness or as a part of a defense team, knowing what I know now I do regret writing the letter,” Pinker said in an email to BuzzFeed News at the time.

The friend Pinker is referring to is Alan Dershowitz, a Harvard law professor who was part of Epstein’s defense team in 2006 and has since been accused of pedophilia himself.

At the time, Dershowitz asked Pinker for his expert opinion on the wording of a federal law that states: “Whoever, using the mail or any facility or means of interstate or foreign commerce … knowingly persuades, induces, entices, or coerces any individual who has not attained the age of 18 years, to engage in prostitution or any sexual activity for which any person can be charged with a criminal offense, or attempts to do so, shall be fined under this title and imprisoned not less than 10 years or for life.”

Dershowitz would later argue that the statue didn’t apply to Epstein, and he seemingly used Pinker’s analysis to back up his reasoning.

“To confirm our view of the ‘plain meaning’ of the words, we asked Steven Pinker … a noted linguist, to analyze the statute to determine the natural and linguistically logical reading or readings of the section,” Dershowitz, along with another one of Epstein’s lawyers, wrote in a letter to the prosecutors of the case. “Specifically, we asked whether the statute contemplates necessarily that the means of communication must be the vehicle through which the persuading or enticing directly occurs. According to Dr. Pinker, that is the sole rational reading.”

Pinker told BuzzFeed News that he wasn’t sure if he knew Dershowitz’s question pertained to the Epstein case and that he had no idea of the charges against Epstein at the time.

Cantlon also revisited on Wednesday her previously-posted photos that Pinker and Epstein have appeared in together.

Pinker addressed the photos when one surfaced on Twitter in 2019. “I have no relationship with Epstein & have taken no funding from him. Our circles have occasionally overlapped: In 02, my lit agent invited me to join a group of east-coast TED speakers Epstein flew to CA. In 14, Krauss seated me next to him at a lunch, & someone snapped a photo,” he wrote.

All of the federal charges in the first criminal case against Epstein were eventually dropped after he entered a plea deal, and he only ended up serving 13 months in jail (he spent much of that on a “work release”). It is unclear if Pinker’s analysis had any effect on the case’s outcome, which has been criticized for being too lenient.

The Daily Dot has reached out to Steven Pinker.