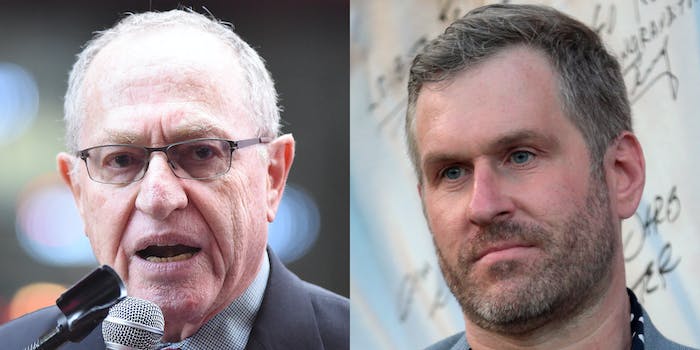 What exactly are Mike Cernovich and Alan Dershowitz doing in the Epstein case?

Four years ago, Democrat John Conyers Jr., a congressman with a proven civil rights track record, was beloved. He fought for WikiLeaks, condemned American intervention in the Middle East, and defended American Muslims from bigotry. Then someone uncovered his secret track record of sexual harassment complaints. Conyers became known as the “first sitting politician to be ousted from office in the wake of the #MeToo movement.”

The scandal was shocking, but even more surprising was the “knight” leading the charge: right-wing conspiracy theorist Mike Cernovich, whose primary claim to fame was his early anti-feminist blogging, pickup artist theory, and promotion of Gamergate.

In recent years, Cernovich focused his efforts on a new figure: Jeffrey Epstein. The scope of the investigation into Epstein’s alleged sex-trafficking ring and its enablers has consumed both sides of the Extremely Online political spectrum with intrigue for several years. But it can be hard to figure out how everyone involved is connected, as even a casual Google search about Epstein can quickly turn into a staring contest with Pandora’s box.

One of the most perplexing aspects of Cernovich’s involvement in the Epstein lore is the connection between Cernovich and attorney Alan Dershowitz. The Harvard lawyer and far-right blogger are frequently linked on Twitter, with accusations and speculation flying that they worked together. The two were part of a documentary made by Cernovich, and any time Epstein news drops, people on Twitter share a picture of them together.

Both were involved in a lawsuit to unseal documents relating to Epstein, which prevailed this week. Is any mention of their partnership real? Or just another conspiracy rabbit hole?

Currently, Dershowitz is online defending himself against allegations of pedophilia in the wake of documents released today surrounding Dershowitz’s involvement with Epstein and Ghislaine Maxwell, who allegedly worked with Epstein. Dershowitz, in a deposition, is accused of having sex with underage women.

The documents, Cernovich say, were released because of him. He’s touting it as his accomplishment, changing his Twitter name to “Epstein Files Unsealed by Cernovich.”

But the question of why the two are constantly linked remains. Rumors about their relationship among leftist circles and the far-right, which agree on little else, suggest that Cernovich, despite publicly antagonizing Dershowitz, actually wants to protect him.

Epstein’s scandal stretches back many decades, but Palm Beach, Florida, police first investigated him for sexual abuse in 2005. Dershowitz represented him as part of a powerful team with five other lawyers helping secure Epstein a controversially favorable plea deal. Epstein and Dershowitz had met almost a decade earlier in the late summer of 1996 in Martha’s Vineyard. “It was just the team Epstein put together,” Dershowitz explained in an interview with the Daily Dot. “I had never worked with him.”

“The day he got arrested he called me. He said he was being investigated, could I help him put together a team of lawyers? I made some recommendations for lawyers and joined that team,” Dershowitz elaborated. While talking to the Daily Dot, Dershowitz mentioned Epstein’s ties to Harvard—Dershowitz’s own employer. According to Dershowitz, his relationship with Epstein ended when the case was over. Afterward, Dershowitz maintains they had no friendship or acquaintanceship at all.

(That, however, is belied by Dershowitz’s own words as recently as 2018.)

Epstein served his sentence in 2008 and essentially put the case behind him until several accusers, including Virginia Roberts Giuffre, tried later that year to void the plea deal, which they had not been allowed to challenge in court—and which they argued was a violation of the Crime Victims’ Rights Act (CVRA).

The women involved in the case made sexual misconduct allegations against Dershowitz as well as prominent British socialite Ghislaine Maxwell, who was arrested in early July 2020 on charges of grooming and procuring young women for Epstein’s pedophile ring.

In a 2015 defamation lawsuit between Giuffre and Maxwell, Maxwell accused Giuffre of lying about Maxwell’s involvement in Epstein’s operation. The case was settled, and a judge ordered all records pertaining to Epstein’s original trial to be sealed, which they were.

But the Epstein saga reached another climactic point in 2014, when Giuffre filed another suit in which she claimed Epstein trafficked her to lawyer and Harvard law professor Alan Dershowitz at least six times, when she was as young as 16.

Dershowitz denied the accusations and even went so far as to try to get her lawyers disbarred (after they sued Dershowitz for defamation, both parties settled).

Fast forward to Nov. 28, 2018, when the Miami Herald launched Perversion of Justice, its extensive investigation into Epstein’s political ties, which implicated Dershowitz. Two days later, Cernovich tweeted about Dershowitz for seemingly the first time ever, mentioning the ties.

Although Cernovich’s tone is vague, he does insinuate that Dershowitz very well may be a pedophile, and denies they have any kind of friendship. In several follow-up tweets, Cernovich admitted that Dershowitz had been featured in his self-made free speech documentary Silenced, which he posted online in 2016. In additional subsequent tweets over the years, Cernovich has called Dershowitz a “pervert,” “Epstein cover-up’er,” “creepy,” and “guilty af.”  He even seemed to support Giuffre’s April 2019 defamation suit against Dershowitz. (To date, Dershowitz has never tweeted about Cernovich in response.)

“I don’t attack him. I have no reason to discuss him. He’s seeking the same thing I’m seeking and I hope he prevails,” Dershowitz told the Daily Dot. “I don’t know why he feels it necessary to attack me. I don’t know very much about him.”

So then why did Cernovich seem to cooperate with Dershowitz in 2019? According to Bloomberg Law, the two supposed enemies teamed up with the Miami Herald in early July 2019, after the initial Herald story but just before Epstein’s arrest and subsequent death, to try to unseal Epstein’s 2008 records.

According to Dershowitz, he wanted to unseal the records in an attempt to find evidence that could clear his name, after he tried and failed to dismiss Giuffre’s 2019 lawsuit. Some of the records Cernovich sought out were published by the Miami Herald, and although Dershowitz joined the effort to unseal, the specific records he wanted to be unsealed were not actually brought to light by the judge—until today.

In a tweet, Cernovich claimed Dershowitz was lying about his intentions to unseal the records, and said that the court only released the records that Cernovich himself requested. In the months leading up to Thursday night’s unsealing, Cernovich was upset that Dershowitz claimed he brought the suit forward—likely because Cernovich’s mentions began to fill up with followers who were flabbergasted at his working with an Epstein associate, and began to question his involvement in the entire scandal.

“Mike Cernovich was not instrumental in charges being filed against Jeffrey Epstein. In 2017 he sued to unseal a portion of a court record that was sealed to protect one of Epstein’s victims. This was an effort to malign the victim who also accused his associate Alan Dershowitz,” wrote Sparrow Media, implying Cernovich was helping Dershowitz collect evidence on Epstein victims.

In response to the accusations, Dershowitz explained to the Daily Dot: “I’m working independently to serve my own interests. I want it to be truthful. I have nothing against [Cernovich]. I’m trying to get this unsealed for my own benefit. I’m not his stalking horse, he’s not my stalking horse. We each have independent reasons for wanting that material unsealed.”

Shortly after Cernovich’s July 2019 tweet, the New Yorker ran a damning article about Dershowitz and the allegations against him, and less than two weeks later, Epstein died in jail. Giuffre continued to stand by her claims, while Dershowitz expressed his belief that Giuffre’s lawyers pressured her to provide false testimony, which resulted in yet another defamation suit against Dershowitz.

In May, Cernovich reignited the flames of the Dershowitz feud in a tweet about how the media did not cover his lawsuit.

Dershowitz remained relatively quiet, but a new set of tweets on June 22 had Twitter buzzing about the Epstein case again.

When asked about the documentary, Dershowitz maintained that he did not specifically remember working with Cernovich. “I’m sure I was in his documentary. People interview me, ask me about free speech, and talk to me. I’m in probably a hundred documentaries about Israel.”

But surely Dershowitz remembered meeting Cernovich at some point?

“I don’t know all the filmmakers who interview me, it’s a one-shot affair,” Dershowitz told the Daily Dot. “I don’t have anything against him, we have not worked together on this.”

Why Cernovich filed his initial suit is still unclear, although he’s long maintained it’s nothing more than a search for justice and truth. But having been a pusher of Pizzagate, Cernovich could maintain his standing with the extremely online fringe right-wing followers who typically associate with QAnon and who saw the Epstein scandal as connected to the Pizzagate conspiracy and the Clintons.

Dershowitz, on the other hand, has repeatedly said he wanted to clear his name with documents included in the sealed files and possibly saw Cernovich’s attention-grabbing lawsuit as an opportunity to do just that, all while Cernovich wanted to distance himself as much as possible from Dershowitz because of his negative publicity.

Either way, the collective efforts worked.

On July 23, U.S. District Judge Loretta A. Preska ruled that many documents from Giuffre’s 2015 defamation suit against Maxwell would be unsealed immediately. Maxwell’s legal team tried to block this decision by claiming deposition transcripts from the document trove were leaked to prosecutors illegally—but the records became public last night.

According to Giuffre’s original deposition, Epstein forced Giuffre to have sex with Dershowitz, “a close friend of Epstein’s.” Additionally, the deposition documents suggest Dershowitz procured Epstein’s controversial deal in order to provide immunity for himself against rape allegations.

For his part, Dershowitz denies having any knowledge of the immunity deal. “That part of the deal was not negotiated by me. I was not even aware of it… And it doesn’t cover me.” He claims that “was something Epstein wanted for the people that he was close to.”

When he heard about the forthcoming release, Dershowitz expressed enthusiasm. Throughout his interview with the Daily Dot, Dershowitz maintained repeatedly that he wanted “every single document in previous cases made public” and that he has “nothing to hide.”

Mike Cernovich did not respond to repeated requests for comment.