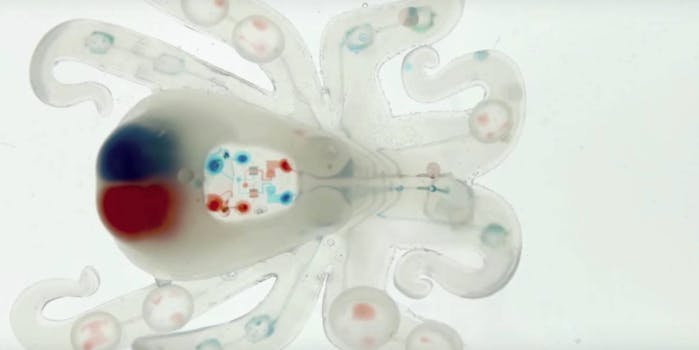 A team of researchers at Harvard University has one-upped the evolutionary process by creating its own autonomous soft robot—a first of its kind.

Experts assembled from the fields of 3D printing, mechanical engineering, and microfluidics came together to make the impressive machine.

Referred to as the Octobot, as the team behind its creation drew inspiration from octupuses, it consists of none of the compromises usually required in creating robots. There are no rigid components usually required of the electric power and control systems, nor is the device tethered to an off-board system like most soft robots require.

The team at Harvard created the functional components required to power the bot—including the fuel storage and power source—to fit inside the soft body exterior using a combination of 3D printing, molding, and soft lithography.

As for how the Octobot moves, the pneumatic-based machine is powered by chemical reactions that take place inside the bot. A small amount of hydrogen peroxide, acting as a liquid fuel, is turned into gas, which expands into the bot’s arms to inflate them.

The team controls the reactions using a soft logic circuit that acts as a circuit board. It can autonomously direct and control the flow of the fuel and when it turns to gas.

While Octobot is just a proof of concept, the next version of Octobot should be able to crawl, swim, and interact with its environment. The team behind it believes it to be an important step in the right direction for the future of soft robotics.