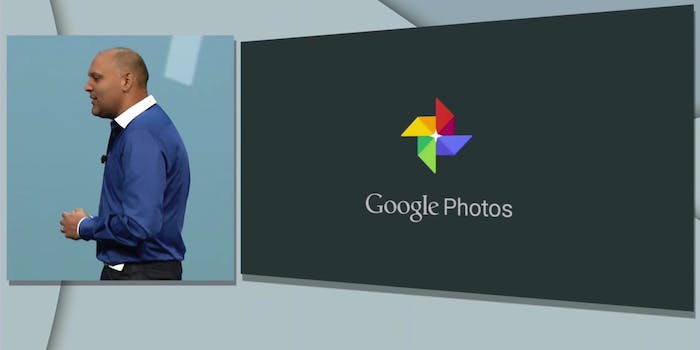 You no longer need a Google+ account to use Google Photos

The search engine wants to help organize all your pictures. All of them.

Google has taken the best part of Google+, dusted it off, and turned it into a standalone service. Director of Product Management Anil Sabharwal officially announced the long-rumored Google Photos during the keynote address of the Google I/O conference on Thursday.

Google Photos, which will live at photos.google.com, will work on desktop, Android, and iOS. It will allow users to upload “unlimited” photos and videos for free (more on that shortly). In terms of features, the new product doesn’t blow away existing photo services, but it has plenty of appeal all the same.

In announcing Google Photos, Google emphasized people’s desire to organize their massive media collections. Because our phones now sport cameras capable of taking really good pictures, we end up with more images, but we do less with each of them. Google’s plan is to rethink organization by sorting the photos based on their content. This includes facial recognition, which will allow you to scroll through a timeline of every image containing a specific person.

Google will also deploy its powerful search capabilities in combination with the image-recognition feature to produce results based on natural-language searches. For example, if you search for “San Diego beach,” you’ll get the photos you took on that beach while visiting that city.

Sharing is another key aspect of Google Photos. Now that it has been freed from the social prison of Google+, the service will support easy photo sharing to people who don’t use Google+ or even Google Photos. If the recipient does have a Google account, they’ll be able to download shared photos into their own library, letting them store memories they were involved in even if they didn’t take the pictures.

Those features aside, however, Google Photos’ primary claim to fame will be its offer of free, unlimited storage. As has been noted, however, the offer is not exactly what it may seem: Photos over 16-megapixels will be stored at a compressed rate, and while videos up to 1080p quality are stored as-is, videos shot in 4K will be crunched down to size.

As with most Google services, Google Photos is free, but it lets Google reap the massive reward of accessing troves of personal media bustling with geolocation, tags, and image-recognition metadata. All of this will feed the company’s machine-learning algorithms. You store your photos at no cost, and Google uses them to get smarter.

Google Photos will be available starting today and will be accessible without a Google+ account.