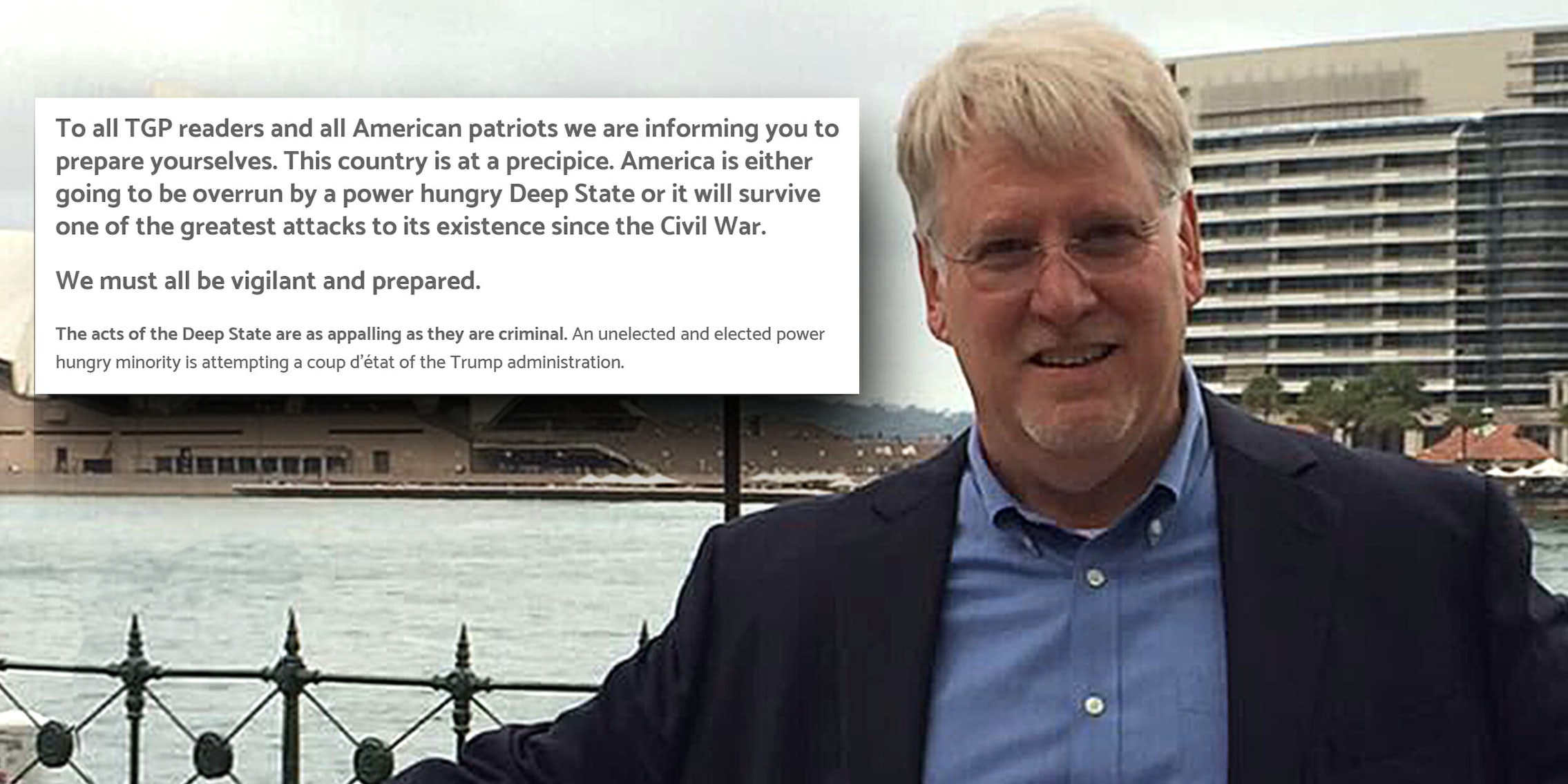 Pro-Trump conservatives were warned on Thursday to say their prayers and to “start planning for the deep state Democrat coup d’état” in an article that—while completely off the rails—might, in fact, be a masterpiece.

The article was written by Joe Hoft and originally published on his own blog but was given a boost when kicked to the front page of the Gateway Pundit by his brother, the website’s founder, Jim Hoft.

While the Gateway Pundit, one of the most popular right-wing blogs, has a record of dubiously sourced stories and conspiracy theory peddling, this particular article raises the bar. As the deep state prepares to strike a final blow to American liberty and “dethrone”—yes, dethrone—President Donald Trump, Hoft calls on all Gateway Pundit readers and patriots to remember the Second Amendment and remain vigilant. It’s a wild and merciless shotgun ride through the looking glass.

Given that it’s almost the weekend, and rather than seriously decipher this beautifully weird mess or dwell on its paranoid scaremongering, we ask that you say a prayer and brace yourself to play the Joe Hoft Deep State Democrats drinking game.

It’s quite simple, really, and can be played alone or at parties.

Pull up a copy of “GET READY AND PRAY TO GOD—The Time Is Now—The Imposters Are Preparing The Final Act in Their Coup d’état” on your tablet or mobile device. Yes, that’s the headline.

The rules are as follows:

The deep state, that vast and elusive shadow government seeking control of the U.S., is an invisible enemy within whose motives are nothing short of ending liberty and holding absolute power. They’re the “unelected and elected power hungry” bad guys, Hoft writes, the “devastating cancer of the Obama years.”

This evil coalition of intelligence and military agencies, the fringe anti-establishment conspiracy goes, backed by the liberal mainstream media and elites, had their plot to install Democrat Hillary Clinton as president thwarted by the election of President Donald Trump in 2016.

“President Trump won the election but this only enraged the Deep State to remove the duly elected President from his rightful position,” Hoft writes. “The Deep State conjured up the fake Russia collusion story to provide cover for illegally spying on Trump during the campaign.”

InfoWars host Alex Jones thought he’d figured out the deep state plan back in July when he claimed they were planning to start a violent insurgency on Independence Day. He was wrong. It seems they are planning, instead, Hoft reports, to use democracy.

“If the Democrats win the House,” Hoft writes, “they will impeach… Their hopes lie in winning the upcoming 2018 election so they can impeach a man for no reason other than he is not one of them.”

The words “deep state” occur eleven times throughout the article. Ready yourself.

In his attempt to provide further context on the deep state’s “fake Russia collusion” scheme to nail Trump, Hoft dives into a contemptuous explainer on Mueller’s “farcical and unconstitutional investigation” into Russian interference in the 2016 presidential election. As far as Hoft is concerned, the whole investigation is merely a vehicle with which to attack the president.

“More false and inflammatory accusations are upcoming. The corrupt and conflicted Mueller team will unveil their lies soon. Who will be next—Donald Trump, Jr., Ivanka Trump, Jared Kushner, the President himself?”

Hoft doesn’t mention it, but the president’s former attorney, Michael Cohen, recently made claims that Trump knew about a June 2016 meeting in Trump Tower (attended by Jared Kushner and Donald Trump Jr.) in which Russians were to offer the Trump campaign dirt on his Democratic rival Hillary Clinton.

That very meeting, it has been already established, was arranged through a Russian intermediary who had contacted Trump Jr. via email. Who knows, he might be next on Mueller’s list.

Drink to Hoft’s convenient failure to mention the above.

One shot when Hoft brings up Hillary Clinton’s “many crimes.”

In contrast to the “witch hunt” Mueller investigation, Hoft references the “many crimes” of Clinton.

On the campaign trail, Trump made frequent attacks on his presidential rival Clinton over her alleged misuse of a private email server when she was secretary of state as well as the finances of the Clinton Foundation.

Hoft claims that the deep state “let Hillary off for her many crimes in an effort to elevate her to the Presidency.”

“They had no intention of doing the same for Donald Trump,” he continues, in the inadvertent implication that the president has committed crimes for which he has unfairly not been absolved.

Due to the “many crimes” that the deep state has let crooked Hillary off with, you’ll need to drink on each mention.

Drink on “AG Sessions turned out to be the modern day Benedict Arnold.”

Mainly because this kind of right-wing cannibalism is actually quite funny. Arnold was, of course, the American general who switched sides in the Revolutionary War to fight for the British. A traitor, in other words. This is Hoft at his finest, imo.

Take a shot (of hard liquor) when the Second Amendment comes up.

“Ultimately the American people will solve the issue of the Deep State. Perhaps no time since the Civil War has the country reached this pivotal point,” Hoft writes in closing. “The Founders predicted a time like this when they created the 2nd Amendment.”

There’s a lot implied here, and several Gateway Pundit readers in the comment section clearly interpreted this as a call to arm themselves against Democrats if they… win an election.