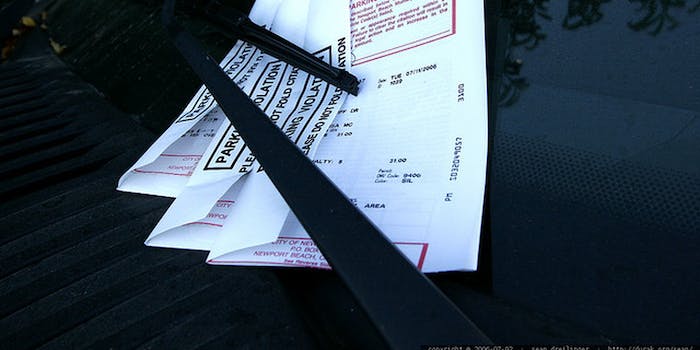 This app will help you get that unfair parking ticket dismissed

It's not a lawyer, but Fixed might be your next best bet to fight a parking fine.

It was the sixth parking ticket that did it.

“I nearly screamed,” Hegarty said in an email to the Daily Dot. “The tickets were complete bullshit, and I knew they had been erroneously issued. So I figured out how to contest them, collected my evidence, and submitted my appeal. I won both.”

Hegarty felt empowered by taking a stand, and it sparked an idea. A few months ago, he and two partners launched a new app called Fixed that helps you contest parking tickets. Right now the app is in Beta for a limited number of users in the San Francisco area, but there’s plans to roll it out to the top 100 cities in the U.S.

Here’s how it works: You find a ticket on your vehicle that you think was unfairly issued. You open up the Fixed app, take a photo of the ticket, and enter the violation code. The app queries a database and determines the probability of success if you decide to fight the ticket. 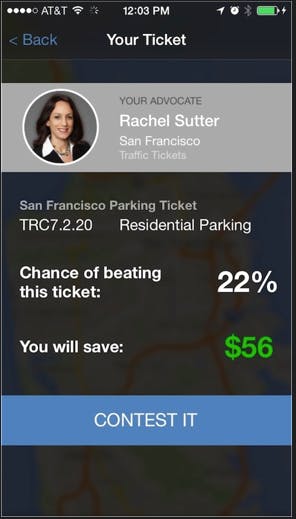 Feel good about your chances? The app provides a list of common errors parking officers make in issuing your type of ticket. You select the applicable error from the list and the app will prompt you to collect the necessary evidence to prove your case.

Once all the applicable information is gathered, an advocate with Fixed prepares a contest letter and exhibits (photos, documents, and anything else that might help). You digitally sign the letter and Fixed mails it for you. If you win your case, you pay Fixed 25 percent of the original ticket fine. If you lose, there’s no charge.

“The more tickets we contest, the smarter we become about recognizing the most common errors and knowing the best contest reasons,” Hegarty said.

So far results have been promising, Hegarty said, but they’re not yet at the 50 percent odds of winning a dismissal that San Francisco publication 7×7 claimed was posisble in 2012.

Building a working knowledge of local parking regulations is obviously one of the biggest challenges for Fixed. Most major cities have dozens—even hundreds—of parking rules. San Fancisco has more than 1,000. That’s also why Hegarty doesn’t hold it against parking officers for wrongly ticketing him or others in the first place.

“I don’t blame the [San Francisco Municipal Transportation Agency],” he said. “There are a 1,000 different parking rules, they are horrifically hard to understand, and the parking wardens have to make (hundreds) of decisions each day under pretty stressful conditions. No wonder they make mistakes. We’re here to give you a voice and make sure you get treated fairly.”

That being said, he’s not so sure city governments will see it like that. Many cities depend on revenue from parking violations to pay for roads, police, and other services. In New York, the fines top $500 million annually, and in San Francisco, it’s not chump change at more than $80 million per year. If it appears an app like Fixed is cutting into that revenue, Hagerty isn’t sure how city officials might react.

“For a long time, they’ve seen parking fines as a cash cow that they milked from motorists,” Hagerty said. “Parking regulations only work if they are fair, and seen to be fairly applied by all motorists. Right now, very few people in (San Francisco) think that. We’re here to restore a little bit of justice to your day.”

The jury’s still out on what might happen if the app becomes widely used and consistendly successful, but for now drivers are clearly excited about the possibilities.

Easiest way to fix a parking ticket… might be my fav new app https://t.co/HpNO0hEHq0