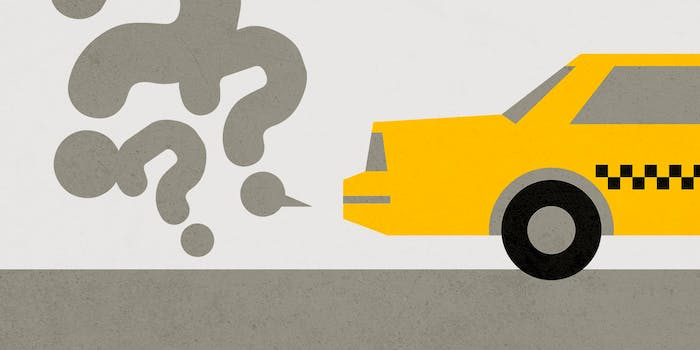 Do you know who's driving you?

Four days after an Uber driver in Kalamazoo, Michigan, shot and killed six people, Dave Sutton is working overtime. Sutton is the spokesman of Who’s Driving You, a campaign funded by the taxicab industry to shed light on Uber and Lyft’s background checks for its drivers. While the shooter, Jason Dalton, had a clean criminal record, meaning a background check wouldn’t have done anything to prevent his tragic shooting spree, the event brought national attention to his organization’s two-year-long behind-the-scenes PR battle.

“For-hire drivers are trusted with a different level of responsibility,” Sutton says at a coffeeshop in the D.C. neighborhood of Tenleytown. “They’re similar to day care providers or childcare providers. Their customers are vulnerable. The drivers have control of the vehicle. Often, their passengers are alone. They may be slightly inebriated. It may be late at night, or they may be in a strange part of town. And during all of this, the driver has control of the vehicle.”

Who’s Driving You isn’t exactly a passion project for Sutton. The 40-something PR executive is employed by Melwood Global, a crisis communications firm based in Bethesda, Maryland, whose clients include state attorney general campaigns, the Democratic National Convention Committee, and the U.S.-Azerbaijan Chamber of Commerce. Knowing that it can’t compete with Uber and Lyft on pricing, vehicle availability, or the recruitment of drivers, the taxi industry has rallied behind the one advantage it believes it has: public safety. The Taxicab, Limousine and Paratransit Association (TLPA), the oldest taxi industry group in the nation, enlisted Melwood Global to shift the narrative around ridesharing and bring its message to the masses.

As the public face of Who’s Driving You, Sutton has an encyclopedic knowledge of every sexual assault, every kidnapping, and every wrongful death linked to Uber and Lyft. Much like an American Lung Association lobbyist can rattle off the number of deaths linked to Big Tobacco by demographic, Sutton can tell you about the Uber driver who struck that 7-year-old girl in San Francisco or that there were nine sexual assaults linked to Lyft and Uber drivers in January alone. He speaks with the fervor of an advocate for an issue, the safety risks of the app-based ride-hailing model, he believes the American public is largely ignoring to their peril.

Who’s Driving You keeps its public profile decidedly low. It consists of a website, a Facebook page, and a Twitter account with slightly under 3,000 followers. Some examples of recent blog posts on its website include “Seven Worst Uber Drivers…Ever” and “7 Common Uber Problems.” The campaign has no boots on the ground and no Washington lobbying presence, despite being located in neighboring Bethesda, Maryland. The Washington Post reported back in March 2014 that the campaign had a total of four employees, including Sutton. When reached by email earlier this month, Sutton would not confirm whether that number had changed or answer any questions about the campaign’s day-to-day activities.

Slowly but surely, however, Who’s Driving You has forced the issue of public safety into the national debate about ridesharing. As the ride-hailing services continue to expand, Sutton and his camp argue it’s necessary to hold Uber and Lyft drivers to the same stringent screening process undergone by taxicab drivers in most major cities, and the effectiveness of their efforts might determine the future of ridesharing.

Are taxis really safer than Uber?

Is riding in a thoroughly vetted taxi safer really safer than riding in an Uber or Lyft? The question is at the heart of the taxi industry’s very survival, but the answer has remained surprisingly elusive. To date, there’s been very little data comparing the two modes of transit.

Accuracy rates for FBI fingerprint background checks have been estimated at 99 percent.

While a sexual assault by an Uber driver in any city make national news, the same can’t be said for a sexual assault by a local taxi driver. Few police departments collect statistics on cab-related crime to begin with. The Atlantic in March 2015 found that  the police departments of five major cities—Boston, San Francisco, Chicago, New York, and Washington, D.C.—didn’t independently classify violent crimes that occurred in Uber, Lyft, and taxis. New York Police Commissioner Bill Bratton said there was an increase of stranger rapes by taxi drivers in 2015 compared to previous years, but both Uber and Lyft drivers were included in the total count. According to a document compiled by the city of Austin, in 2015 Uber drivers were allegedly involved in 13 sexual assaults and one rape. Taxi drivers were involved in five sexual assaults; and Lyft drivers, six. One sexual assault was listed as Uber or Lyft.

Experts argue that given the lack of consistent data, it’s important to focus on which entity has the safest process.

In the United States, a variety of professions, from government employees to nurses, mandate fingerprint background checks, which cross-reference a person’s fingerprints against those in local, state, and federal criminal databases. Such biometric background checks are required for taxi drivers in most major U.S. cities due to the responsibility cab drivers have for their passengers’ safety. Experts say that running a search on a person’s fingerprints, as opposed to a person’s name, ensures a person who shares the same name with a criminal won’t come up as a false positive, or a criminal who uses multiple aliases or a fake name won’t pass unnoticed. Most taxi regulators, such as those in New York City, Los Angeles, and Washington, D.C., also require federal criminal background checks that go back to when an applicant is 18 years old.

By contrast, both Uber and Lyft use background checks conducted by private companies, which rely on an applicant’s name, social security number, motor vehicle records, and other personal information. Lyft spokeswoman Chelsea Wilson noted in an email that the company does not operate in any city that would require it to fingerprint its drivers. Likewise, Uber pointed out in a blog post that manual error and smudged or smoothed over fingerprints due to aging leads to what it says is an imperfect LiveScan fingerprint process. Fingerprints nowadays are commonly taken with LiveScan technology, which scans a person’s fingerprints, as opposed to the traditional ink-and-paper method.

Former New York City Taxicab Commissioner Matthew W. Daus said this was a “ridiculous and defective argument” on Uber’s part and pointed to the 11-plus percent error rate of Uber’s name-only check. Accuracy rates for FBI fingerprint background checks have been estimated at 99 percent.

“No process is 100 percent, but governments should strive to ensure the most accurate means available, and saying this does not make their inferior and less accurate name checks more comprehensive than biometric fingerprints through LiveScan,” said Daus.

The push for fingerprinting

Uber and Lyft’s vetting process for drivers is under more scrutiny than ever. Nine days prior to the most high-profile violent crime in Uber’s history, the company agreed to a $28.5 million settlement for a class-action lawsuit over its $1 “Safe Ride” fee and claims that its service was safer than a taxi cab. In April, Uber settled another $25 million lawsuit brought forth by the district attorneys of Los Angeles and San Francisco related to its background checks.

The California case, in particular, represented a pivotal victory for Sutton and the taxi industry in that the state declared that the name-only background checks Uber and Lyft ran on its drivers were inferior to fingerprint background checks.

“Their priority is to attract new drivers, who may be unsafe and inexperienced, instead of fully vetted and safer professional drivers.”

The most serious flaws in Uber’s screening process, prosecutors found, was its lack of biometric identifiers and the fact that it only goes back seven years. The end-result was that drivers who used false aliases or had less-recent criminal histories slipped through the cracks of Uber’s screening process. Prosecutors looked at the criminal records of Uber drivers in San Francisco and Los Angeles and found convictions of sex offenses, kidnapping, assault, robbery, burglary, fraud, and identity theft that occurred before the seven-year window of Uber’s background check. In the amended complaint by the Los Angeles and San Francisco prosecutors, they noted that one Uber driver was convicted of second-degree murder in Los Angeles in 1982 and spent 26 years in prison. He applied to be an Uber driver under a different name.

Prosecutors also argued that Uber intentionally misrepresented the thoroughness of its screening process by making claims that it goes back “as far as the law allows” and that they were “industry-leading.” As a condition of the lawsuit, Uber is barred from using such terms in its advertising materials. Uber has defended its seven-year window, saying it complies with state laws intended to make it easier for ex-felons to ease back into the workforce.

Outside of California, the emphasis on public safety is hitting some regions harder than others. “Currently the safety incidents that happened around ridesharing is adding to the thought and the notion that maybe there is an opportunity to improve the background check process,” noted Ernest Chapprah, the chair of the D.C. Taxicab Commission, which also has jurisdiction over rideshare companies like Uber and Lyft. “But we are not at the point that a whole group of people are asking for it.”

Both ride-hailing companies are fighting back against city governments who want fingerprint background checks, threatening to pull out of cities all together. Uber ceased operations in the Texas cities of Garland, Midland, and Corpus Christi after the cities voted to require fingerprinting of Uber and Lyft drivers. Both Uber and Lyft have funneled an estimated $8 million to fight background checks and other regulations in Austin. They are currently threatening to leave Houston and just pulled out of Austin. After Uber threatened to leave Newark, New Jersey, following the city’s call for drivers to be licensed, the city finally settled for a $10 million lump sum from Uber.

“If you really think about it, why would [Uber and Lyft] not just spend around $50-$75 dollars per driver for a superior government-initiated biometric fingerprint criminal conviction background check, to better protect the public and insulate themselves from liability?” Daus asked. “It is because their priority is to attract new drivers, who may be unsafe and inexperienced, instead of making the extra effort in many markets to recruit fully vetted and safer professional drivers who currently work for other licensed taxicab and limousines companies.”

From Uber and Lyft’s perspective, the fight is one of an innovative startup technology that is popular with consumers versus government bureaucracy. Sutton believes that Uber’s defense that it’s a technology company misses the point.

“Uber didn’t invent app technology—taxis were actually using it before Uber came along,” Sutton said. “But at some point, you can place all that aside, and an individual gets into a vehicle with a stranger. Strangers driving strangers. This is the same business it’s been going on for a hundred years. That’s the taxicab business.”