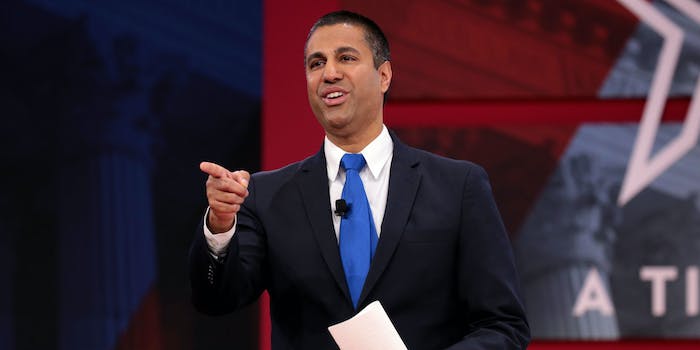 The Sinclair/Tribune merger dodges another bullet.

The denied request was made shortly after a viral compilation video showed Sinclair’s local news anchors giving the same scripted segment on fake news. In their letter to the FCC, the 12 senators—11 Democrats and Independent Bernie Sanders—asked the FCC to review Sinclair’s broadcast license and pause its impending merger with Tribune.

“We are concerned that Sinclair is engaged in a systematic news distortion operation that seeks to undermine freedom of the press and the robust localism and diversity of viewpoint that is the foundation of our national broadcasting laws,” they wrote. “[It] may have violated the FCC’s longstanding policy against broadcast licensees deliberately distorting news by staging, slanting, or falsifying information.”

Pai responded, saying the agency doesn’t have the authority to revoke a license based on news coverage. He gave a similar reason to Republicans who backed Donald Trump’s call for the FCC to revoke NBC’s license for allegedly spreading “fake news” last October.

“I understand that you disliked or disagreed with the content of particular broadcasts, but I can hardly think of an action more chilling of free speech than the federal government investigating a broadcast station because of disagreement with its news coverage or promotion of that coverage,” Pai said in his letter to Democrats.

There was a lot riding on the FCC’s decision. Sinclair announced last year it would expand its control over local news outlets with a $3.9 billion acquisition of Tribune Media. The deal, if it goes through, would give Sinclair unprecedented power over local news throughout the United States. It would add 42 additional TV stations in major markets, boosting its reach to more than 70 percent of U.S. households, far more than any competing broadcaster. Sinclair already owns 193 TV stations in 89 U.S. markets. Recent studies show that around 40 percent of Americans still get their news from watching local TV stations.

The request for the FCC to review Sinclair was the latest push from Democrats and consumer rights groups to get the merger suspended. But their concerns have fallen on deaf ears in the past few months. In fact, the FCC even created a loophole in a rule that previously prevented single firms from owning enough stations to reach more than 39 percent of American households.

President Donald Trump, who Sinclair typically broadcasts in a positive light, defended the company in a tweet earlier this month: “The Fake News Networks, those that knowingly have a sick and biased AGENDA, are worried about the competition and quality of Sinclair Broadcast,” Trump wrote. “The “Fakers” at CNN, NBC, ABC & CBS have done so much dishonest reporting that they should only be allowed to get awards for fiction!”

The Fake News Networks, those that knowingly have a sick and biased AGENDA, are worried about the competition and quality of Sinclair Broadcast. The “Fakers” at CNN, NBC, ABC & CBS have done so much dishonest reporting that they should only be allowed to get awards for fiction!

Not everyone at the FCC is as willing to let the merger go through. Just last week, commissioner Jessica Rosenworcel, in a tweet, threw her own agency under the bus for kneeling to Sinclair’s desires.

“As I have said before, there is a troubling pattern at the @FCC. The agency’s big media policy decisions all seem custom-built for the business plan of Sinclair Broadcasting. This is not right,” Rosenworcel tweeted.