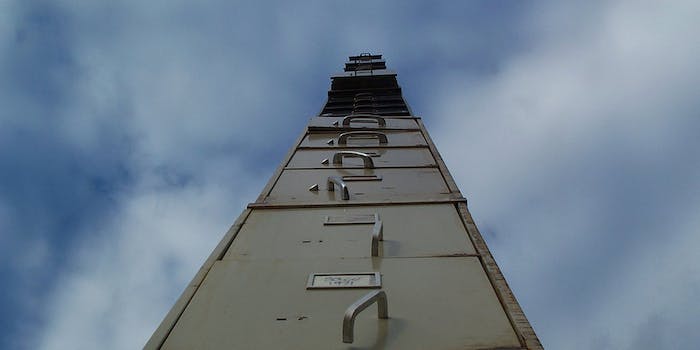 The FBI is destroying all of its paper records

The Federal Bureau of Investigation is launching what might be called “Operation Paperless,” destroying over a 100 million pieces of paper after completing a massive digitization effort.

According to a new report published today on the FBI’s website, the documents are stored in the bureau’s “Next Generation Identification” system, which made news earlier this year when the Electronic Frontier Foundation raised questions about the information it would contain on tens of millions of Americans.

Four years ago, the bureau’s Criminal Justice Information Services Division opened the Biometric Technology Center in Clarksburg, W.V. It’s home to the FBI’s Biometric Center of Excellence, and in the last two years alone, the FBI has digitized almost 9 million reports, fingerprints, and other records for storage there.

The completion of this process means that the FBI no longer needs hard copies of its voluminous stores of records. All of those papers will be destroyed.

A video published with the report, “End of an Era for FBI Files,” featured CJIS area manager Donna Ray discussing the digital transition.

“The employees that work in these files have worked here for years,” Ray said. “It’s sad, but it is really a dying art. It’s the legacy system; it’s historical.”

The FBI expects that its fully digital archives will dramatically speed up the process of fulfilling data-retrieval requests from other government agencies.

“This is a monumental leap for us, because now we’re not taking months to get back with a positive identification,” CJIS Deputy Assistant Director Jeremy Wiltz said. “With our Next Generation Identification, we’re going to take that into seconds and sub-seconds.”

Photo via redjarFlickr (CC BY SA-2.0)