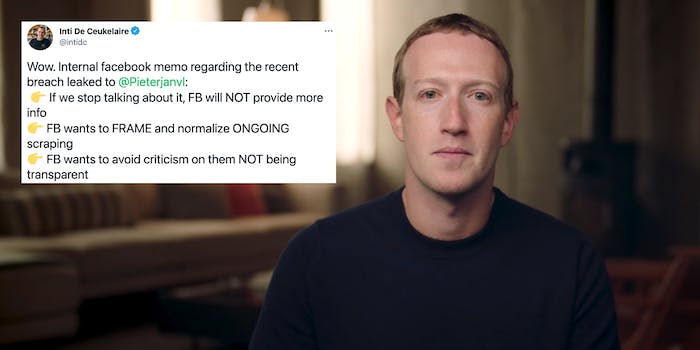 An internal company email was inadvertently forwarded to a Belgian journalist.

Facebook appears to have inadvertently leaked its internal strategy for how it deals with scandals.

In response to a media inquiry from Belgian journalist Pieterjan Van Leemputten on April 8, the tech giant reportedly forwarded an email that outlined the company’s efforts to wait out the press.

Facebook is currently embroiled in yet another privacy scandal after data on more than 530 million users, reportedly taken during a breach in August 2019, was posted to a public hacking forum.

The data not only included full names, locations, and some email addresses, but users’ phone numbers as well.

In the email mistakenly forwarded to Leemputten, Facebook noted how the scandal had already begun disappearing from the news.

“With regulators fully zeroed in on the issue, expect the steady drumbeat of criticism to continue in the press,” the company wrote. “However, it is important to note that both media coverage and social conversation continues to gradually decline from its peak over the weekend and on Monday.”

The social media platform also made it clear that it had been closely monitoring the pushback online.

“Coverage from top-tier global publications has declined by 30% in the past 48 hours, compared to the proceeding two days,” Facebook added. “Social conversation has followed a similar trend, but at a more accelerated rate, declining by 50% in the latest 48 hour span when compared against conversation Saturday through Monday afternoon.”

In a section outlining its long-term strategy, Facebook stated that it does not plan to provide any additional statements on the breach, “assuming press volume continues to decline.”

The tech giant even revealed that it had rescheduled two other press releases on privacy-related issues in order to “disassociate them from this cycle.”

Facebook additionally weighed in on its goal of normalizing such breaches as well as its attempts to avoid criticism over claims that the company has failed to be transparent.

Staying true to its strategy, Facebook has not commented on the inadvertent leak of its email. The Daily Dot will update this story if we hear back.