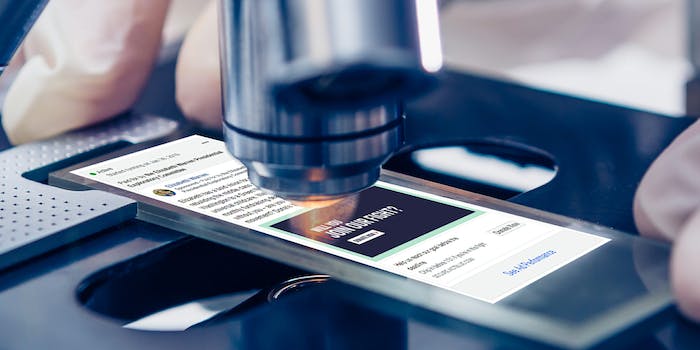 An already bad system isn't going to get any better.

After a PR nightmare that revealed Russians bought thousands of Facebook ads to influence the 2016 presidential election, Facebook launched a new structure for fielding and handling ads.

But they’re already walking back that tepid effort at transparency.

As reported by ProPublica, despite its repeated calls for “transparency,” Facebook has actually been quietly restricting access to tools created by outside parties and publications to monitor how users are being targeted by political advertisers. This month, those tools stopped working because of new updates Facebook implemented.

“This is very concerning,” said Sen. Mark Warner (D-Va.), who co-sponsored the Honest Ads Act requiring Facebook ad transparency. “Investigative groups like ProPublica need access to this information in order to track and report on the opaque and frequently deceptive world of online advertising.”

Before the update, ProPublica’s impending Political Ad Collector tool took information accessible by Facebook users on how they’re being targeted for ads, but automated the process into a searchable database. According to the publication, the Political Ad Collector, which had been in the works for 18 months, would be able to show users who ads were targeting with a rollover feature called “Why Am I Seeing This?” followed by an explanation.

Starting in May of last year, Mark Zuckerberg’s platform also launched a transparency push, which would enforce restrictions for political ads. According to the social media site, political ads intended for Facebook or Instagram—which is also owned by Facebook—can only be launched by “authorized advertisers.”

But even then, an investigation by Vice showed the site could purchase ads for “Mike Pence.” Even before it launched, Zuckerberg admitted his solution’s impotence.

“These steps by themselves won’t stop all people trying to game the system. But they will make it a lot harder for anyone to do what the Russians did during the 2016 election and use fake accounts and pages to run ads,” Zuckerberg wrote on Facebook. “Election interference is a problem that’s bigger than any one platform … This will help raise the bar for all political advertising online.”

And for an added level of pseudo-transparency, those ads are available in a searchable archive that logs posts from either platform. This sounded great in theory—until you try it.

According to its website, the Ad Archive collects ads “about elected officials, candidates for public office and issues of national importance, such as education or immigration,” that were launched on or after May 7, 2018 and will store them for up to seven years.

Facebook is also publishing a weekly Ad Archive Report, letting users know how much advertisers have spent. As of publication time, the report says that there are more than 2.5 million ads are stored in the archive right now.

In addition to the ads themselves, the archive gives users some context, including:

In theory, this should be great. It should be a glimpse behind the curtain for the general public and a new tool for journalists, researchers, and political campaigns at the very least. The only problem is we’re less than a year into this archive and it’s essentially worthless.

A simple search for “2020” reveals approximately 40,000 ads, which makes parsing what is happening on the network a Herculean effort.

But it’s not just the amount.

The social media site reportedly called its Ad Archive an “alternative” to ProPublica’s, but as ProPublica pointed out, Facebook’s version is only available in three countries, doesn’t disclose targeting data, and fails to include all ads, unlike its own.

A tweet from Facebook’s Director of Product, Rob Leathern said a set of transparency tools will be globally available in June. But if it’s more of the same, it won’t be useful at all.