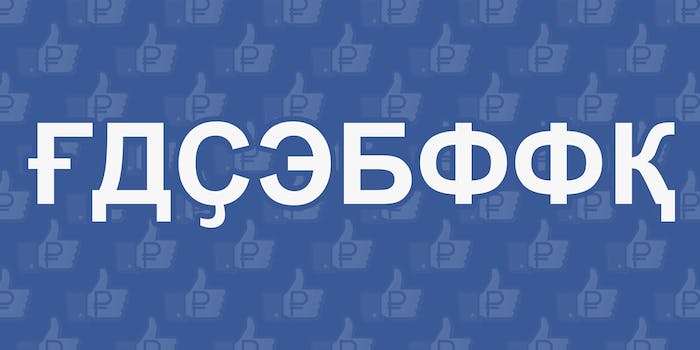 Facebook sold $100,000 worth of political ads to Russian ‘troll farm’ during 2016 election

Facebook told congressional investigators that it sold ads to a Russian company seeking to target younger voters during the 2016 presidential election, potentially manipulating their vote.

The Washington Post reports that Facebook told investigators it had $100,000 worth of ad sales to a Russian “troll farm” beginning in the summer of 2015. The ads mostly focused on divisive issues including gun rights, immigration, gay rights and racial discrimination.

Facebook’s admission to congressional investigators comes amid the sprawling Russia probe being conducted by the Justice Department and both houses of Congress into Russian meddling in the 2016 election and whether members of President Donald Trump’s campaign worked with Russian officials to help sway the election.

The ad sales were found as part of an internal investigation, the Post reports.

In a statement, Facebook said it found “roughly 3,000” ads connected to 470 inauthentic accounts and pages it believes were “affiliated with one another and likely operated out of Russia.” The Post reports that they are suspected of being connected to The Internet Research Agency, a Russian firm known to push pro-Kremlin propaganda.

“We have shared our findings with US authorities investigating these issues, and we will continue to work with them as necessary,” Facebook’s Chief Security Officer Alex Stamos said in a statement.

Stamos said a “majority” of the ads didn’t specifically reference the presidential election or a particular candidate but did try to amplify divisive issues.

Internal Facebook research from 2012 found that the types of content users see on the social network can influence their real-world action. In fact, a user seeing political content on Facebook correlated with an increased likelihood that that user would vote.

The discovery of Russian trolls buying Facebook ads is the latest misstep for the social media giant regarding its role as a hub of information during the 2016 election. Following Trump’s victory, and the proliferation of “fake news” into the national vocabulary, critics said Facebook played a large role in the spread of hoaxes, conspiracy theories, and other fake news that was rampant throughout the campaign season.

Last month the company announced that it was taking steps to curb the spread of fake news by blocking pages that “repeatedly share stories marked as false” from advertising on Facebook.