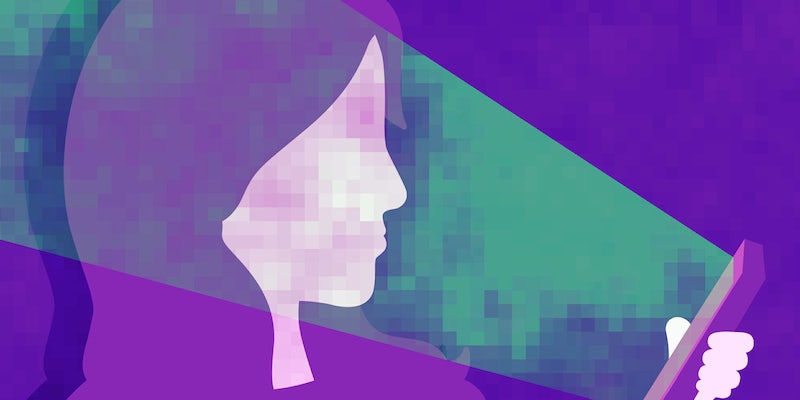 Facebook is helping husbands ‘brainwash’ their wives with targeted ads

This may seem like the rejected plot of a 'Black Mirror' episode, but we've tested it for ourselves: It's definitely real.

Imagine you’re married. Maybe you’ve been going through a stressful couple of months. Perhaps you’ve lost your job, or your current job is a nightmare, and maybe you’ve suffered from poor health and fallen out with long-term friends, so that you hardly ever see anyone but your husband and kids. Now imagine that, understandably, your libido has fallen through the floor during this difficult period, so you don’t even think about sex anymore. And finally, imagine that your husband has begun targeting you with online ads intended to “brainwash” you into having sex with him, since he can’t think of any other way of restoring your interest in lovemaking.

This scenario might sound like some kind of weird dystopian joke or the rejected plot of a Black Mirror episode. However, it’s now actually a reality, thanks to a new startup called the Spinner and to Facebook, where the startup has found a place to host its manipulative ads.

Of course, Facebook’s history of ethically questionable ad practices is well documented. Long before the Cambridge Analytica scandal, the social network was routinely harangued for its lucrative hosting of ads and articles intended to manipulate everyone from voters to “insecure” teens, and despite recent attempts from Mark Zuckerberg and Co. to prove that Facebook has changed, it still has a seemingly effortless knack for courting controversy.

Most critics assume that Facebook’s misadventures relate only to its posting of ads paid for by corporations and agencies, organizations that aim to puppeteer the “average” individual. It turns out, however, that the social network also now lets this same average individual place ads that aim to manipulate other such individuals, all thanks to the mediation of a relatively new and little-known company called the Spinner.

Based in London, Bangalore, and Tel Aviv, the Spinner invites would-be customers to pay $29 in exchange for it targeting a spouse, family member, friend, or colleague. Customers can choose from a variety of “campaigns,” ranging from the notorious “Initiate sex!” program, to those that encourage targets to quit their jobs, propose marriage, or even buy their kids a dog. With the fee paid and the campaign chosen, the service then sends the “target” an innocent-looking link, as explained to the Daily Dot by Elliot Shefler, the company’s VP of social and media (who has no LinkedIn account or any other digital trace and who “declined to face the camera for a photo” in a recent Forbes article). “This link is sent to the target via text message,” he told us. “When the target presses the link, a cookie connected to the link attaches itself to the target’s phone. From this point the target will be strategically bombarded with articles specified for him or her.”

The Spinner launched in April, and it was featured in a number of (fairly indignant) websites in July. At the time, it was reported that it took over ad space via “content discovery platforms” like Outbrain, Revcontent, Taboola, and Adblade, which “are in charge of all those ‘around the web’ and ‘recommended for you’ ads that are syndicated in either rows of links or boxes of ads that appear under articles on many news sites,” as Shefler puts it. But Shefler informs us that the Spinner began using Facebook and Instagram in October, purchasing ad space on these two sites so that targets see the manipulative ads on their personal feeds.

As an example, its “Initiate sex!” package shows 10 different articles to the target viewer, who will see these articles advertised 180 times in a variety of contexts (including on Facebook) over the next three months. One such article, as seen in a screenshot from the Spinner, is “The Importance of Sex for a Happy Marriage,” from marriage.com. Another article we were able to see for ourselves, after clicking on a cookie link from the Spinner, was “15 Reasons Why You Should Get Your Kid a Dog” (taken from the Dog Is Good online pet accessory store), sent to us as part of the Spinner’s “Get your kid a dog!” campaign. It’s unclear whether the sites are aware of their inclusion in such campaigns.

Regardless of the exact provenance of its source material, it’s clear that the Spinner has entered something of a gray area by selling husbands the opportunity to “brainwash” (a word Shefler himself uses) their wives into having sex with them. While the Spinner offers a range of other relatively benign campaigns—including “Quit smoking!” “Stop eating meat!” and “Stop riding motorcycles!”—the “Initiate sex!” one is easily the most popular, and its purchasers are so far 100 percent male. This compares to 82 percent for all of the Spinner’s campaigns as a whole—approximately 150,000 to date—indicating the kind of demographic to which the Spinner’s services generally appeal.

Aside from the morality of its services, what’s also questionable is the effectiveness of the Spinner’s methods. Asked whether its male customers report an increased readiness of their wives/girlfriends to sleep with them, Shefler simply replies: “Sure. 180 days after the campaign is activated, we send the user a feedback form. We get many emotional stories back.”

Shefler refuses to offer any further details of the Spinner’s success rate, although he is more forthcoming when it comes to defending the company’s ethics. “Selling media is the business model of all social networks and almost all newspapers, news sites, and TV channels,” he says. “They sell their space and air-time to advertisers who are using it to change your behavior and influence you to buy products. How is this different? Brands and politicians are already doing it for years. We are giving those abilities [to] the common man.”

Superficially, this argument makes a certain amount of sense, but many of the Spinner’s campaigns relate to extraordinarily intimate aspects of people’s lives, rather than simply to the brand of detergent they purchase. For example, a highly cited research paper published in The Journal of Sex Research in 1993 concluded that “sexually inactive marriages are not uncommon, they are not happy, stable marriages in which the partners simply do not have sex. Lack of sexual activity may be a danger signal for many marriages.” In other words, if our wives and girlfriends are disinterested in sex, there’s likely to be a wide range of reasons for this, meaning that simply ignoring the problem and trying to “brainwash” them into sexual activity will only perpetuate or exacerbate the problem—especially if she’s turned off by your controlling behavior in the first place. And the same goes for any other deep-rooted behavior (such as smoking, drinking, or not proposing marriage) a person exhibits.

“The whole setup of trying to influence a partner to want/initiate sex by subterfuge is undermining to any relationship,” explains Julia Cole, a psychosexual therapist and relationship counselor. “It suggests a lack of true intimacy and respect in the partnership, and also suggests a less-than-sophisticated understanding of sexual functioning in men and women. Desire for sex depends on mood, levels of stress or tiredness, feelings of emotional closeness/distance and timing. Sending a link to a website is very unlikely to meet these needs. The best way to enjoy and initiate sex is to talk about what you want and what gives you pleasure. It’s crucial to be sensitive to what your partner is feeling and to respond to this. Manipulation for any reason is not conducive to a loving relationship and should be avoided if couples want an honest and thoughtful life together.”

Other therapists judge what the Spinner is doing more bluntly. Seconding much of what Cole says, Raffi Bilek—a counselor at the Baltimore Therapy Center—also tells the Daily Dot, “You probably wouldn’t drug your wife to have sex with her when she’s passed out. You shouldn’t be trying to brainwash her either.”

As for Facebook, the social media giant has so far failed to provide an answer to our query on where it stands on such a service (it’s currently investigating the Spinner’s claims). Even so, the Spinner’s use of Facebook and Instagram provides yet another unfortunate example of how big social networks that feed on ad revenue are prey to unscrupulous and potentially damaging uses. It also highlights how Facebook and other social networks essentially sell their users to the highest bidders, who all too often don’t have the best interests of those users at heart.

As the founder of the skills-sharing social network Humans.net, Vlad Dobrynin, argues, other companies and groups are using Facebook to bombard us with ads all the time. What’s more, even if such ads arguably aren’t as morally questionable as the Spinner’s, they nonetheless involve a similar invasion of privacy and a similar aim of persuasion or manipulation. “In general, it does not matter who targets you with information, whether it is a company, friends, or acquaintances,” he says. “You don’t have a choice, you receive an incessant stream of messages on your computing devices, messages that you have no interest in and do not want. It’s irritating to say the least and a violation of privacy. You didn’t ask for ads; rather someone is invading your personal space, invading your smartphone and screens.”

On one level, then, the Spinner’s activities shouldn’t be massively surprising. However, given that it’s letting individuals target other individuals with messages that attempt to manipulate their personal behavior (rather than their behavior as consumers), the Spinner provides a very stark example of the kinds of abuse that huge, ad-based social networks like Facebook enable. So next time you scroll through your social media feeds, remember there’s now yet another reason to take those headlines with a grain of salt.