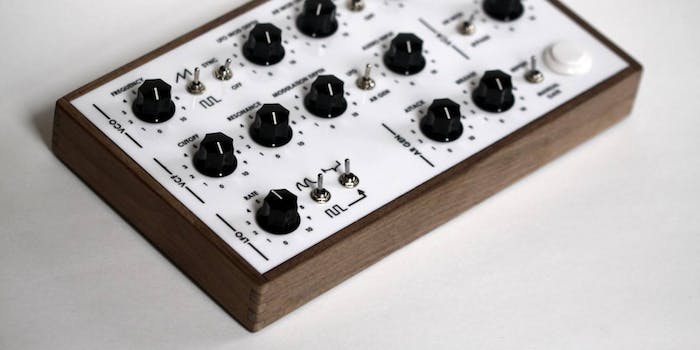 Etsy refuses to believe this guy builds his own synths

Brendan Byrne's shop was pulled offline three days ago, and it won't be reinstated until he can provide photos for his entire construction process.

Brendan Byrne makes and sells synthesizers on Etsy. Or at least, he did, until Etsy decided he wasn’t building them himself and shut down his store.

The first time Byrne knew there was a problem was when Etsy unexpectedly closed his store three days ago. Despite the fact he seemed to be operating within the site’s terms and conditions, an Etsy representative asked for photos of his entire construction process to prove that he wasn’t just selling on ready-made instruments. Unfortunately, Byrne’s latest synths were already finished, so all he could do was send some pictures of his building materials. As Byrne wrote on his Tumblr:

At first I was a bit flattered and followed their instructions to confirm that I had in fact built them myself. I supplied the following photographs…

• Photos of the device (outside, inside, and the laser etched logo on the back with my etsy shop html link) 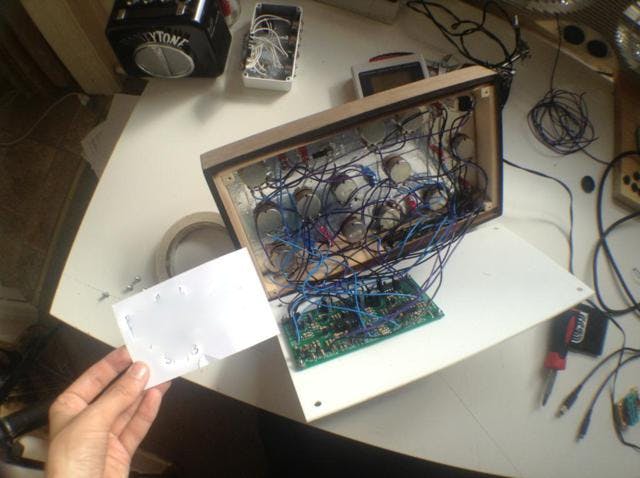 Sadly, this was not enough for Etsy. Byrne was surprised to learn that unless he could document the entire construction process, they wouldn’t reinstate his account. Which is strange, considering the fact that plenty of Etsy stores in the “handmade” category are “hand-assembled” rather than being made entirely from scratch, such as necklaces made from shop-bought beads. As Byrne pointed out during his email exchange with the Etsy representative:

“When I look over Etsy and see cases of rampant copyright infringement and ‘prints’ that were generated using Photoshop filters and standard copiers I can’t help but feel persecuted for the nature of my items. Do you ask those sellers for photos of the work coming out of the printer? Or images of them adjusting levels in photoshop?”

Even after providing Etsy with sources for all his raw materials, an explanation of his business, and pictures of a finished synth with his logo laser-etched onto the back, his store remained offline. If you try to find it now, all you’ll get is a cutesy “Oops!” message on the Etsy site. Quite apart from the fact that Byrne complied with Etsy wherever possible, it seems odd that he should be required to provide a step-by-step explanation of his entire construction process.

How Etsy validates such verification attempts is unclear. In February, Etsy shut down a shop, Gemarama, even after the owners detailed their creative process with 38 photos, and offered little in the way of explanation.

Writing on his Tumblr, Byrne explained: “It just so happens I don’t want Etsy to know exactly how I go about constructing my electronics and especially the enclosures. I realized this was an intellectual property issue.” Evidently, many others agree. Just one day after he posted the entire email exchange to his blog, Byrne’s story has gone viral, boosted by people like Wil Wheaton and reaching the front page of Hacker News.

Even Byrne’s blog seems like a pretty good indicator that he isn’t just selling pre-made synths: Almost every post is a picture of electronic equipment in varying stages of construction. In fact, Byrne’s own explanation is beginning to seem entirely likely—that the rarity of handmade electronics on Etsy means the site simply doesn’t know what to do with them.