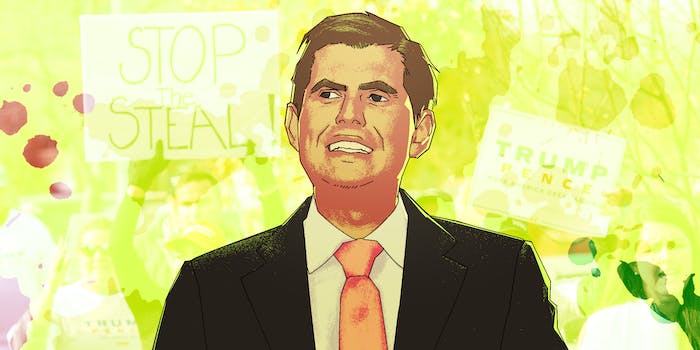 He blasted videos with no discernment, riling up his base to a fever pitch.

As the 2020 results began to shift in favor of Democratic presidential candidate Joe Biden on the day after the election, Eric Trump was eyeing his Twitter feed in disbelief.

For many, the occurrence was entirely unsurprising. President Donald Trump had spent months in the run-up to the election sowing doubt about the legitimacy of mail-in ballots, leading many of his supporters to vote in-person.

But mail-in ballots, which are counted after in-person votes in counties across the country, were favored by left-leaning voters—even more so amid the coronavirus pandemic. Despite Trump’s early lead and eventual fall being predicted by many for this very fact, Eric seemingly couldn’t accept that his father’s victory was slipping away.

The president’s supporters couldn’t believe the apparent defeat either. Conspiracy theories, mainstreamed by the president over his four years in office, quickly engulfed conservative echo chambers on social media.

Only this time, Eric, who had remained largely out of the spotlight compared to his siblings Ivanka and Donald Jr. during their father’s political reign, quickly became one of the more-prominent accounts to spread election-related disinformation.

Unconfirmed anomalies, unverified video clips, and unexplained photographs all made their way to Eric’s Twitter feed. Verification wasn’t needed. The content was evidence enough of what conservatives already knew: The election had been stolen from Trump.

The false claims of voter fraud from Eric, who currently boasts more than 4.5 million followers on Twitter, reached a staggering number of users. On just Nov. 3 alone, fraud allegations made or amplified by Eric were collectively retweeted roughly 90,000 times, according to an analysis by the Daily Dot. In the following days, the amount of debunked content promoted by Eric grew exponentially.

Analysis from social media monitor Storyful in an article for the Wall Street Journal revealed even more staggering statistics. Between Election Day and Jan. 6, the day Congress met to count the Electoral College votes, Trump’s family as well as his lawyers and allies made more than 200 posts on Twitter about election fraud. In total, those posts collectively received close to 3.5 million retweets and over 9 million likes. The popular hashtag #StopTheSteal, according to the BBC, was used in 1.3 million tweets during the same time period.

But to date, no evidence whatsoever has been presented to indicate that altering millions of votes undetected is even possible, let alone that such a scenario actually took place.

More than 50 of the globe’s leading election security specialists even went as far as to sign an open letter stating that the voter fraud allegations presented thus far are not credible.

While Eric unsurprisingly amplified many of his father’s most militant cheerleaders, including Trump’s personal attorney Rudy Giuliani and White House Press Secretary Kayleigh McEnany, his profile also became a megaphone for fraudulent voter fraud videos circulated by an army of Trump’s online supporters. Eric’s online presence, however, would devolve into a real-world one just weeks later when he would find himself inciting countless Trump supporters to fight back against perceived election fraud outside of the White House. The call to action, also echoed that day by Trump and Giuliani, would lead to a ransacking of the Capitol and the death of five people.

One of the first such online instances of riling the masses came on Nov. 4 when Eric shared a now-deleted tweet purporting to show footage of an individual “burning 80 Trump ballots.” The account Eric retweeted—@Ninja_StuntZ, which was suspended from Twitter not long after—is linked to a man who sells 8kun-branded coffee. 8kun, the far-right imageboard successor to the notorious 8chan, has long been a hotbed of misinformation and is where the QAnon conspiracy theory burgeoned.

In a video on YouTube, @Ninja_StuntZ explains that he first saw the alleged ballot burning clip shared by two Twitter accounts—@theo_fletcher and @wan_ofakind.

Both accounts tweet almost exclusively pro-China propaganda, including claims that the U.S. was responsible for the coronavirus pandemic as well as remarks that downplay the Tiananmen Square massacre. Eric’s discerning eye didn’t seem to catch any of that.

When questioned by the Daily Dot,  @wan_ofakind denied being the original source of the video but allegedly could not recall where they had found it. The other account, @theo_fletcher, stated that they came across the clip in a group chat on WhatsApp.

When asked for more information on the video, such as whether actual footage had been shared in the chat or merely a link to another source, @theo_fletcher claimed not to remember as well.

The video did not actually show ballots for Trump being burned. Examination of the footage clearly shows that publicly available sample ballots were used. Officials in Virginia, where the sample ballots originated, thoroughly debunked the claim by showing actual ballots in comparison.

But the incident was just one of many examples that would soon follow of Eric retweeting false claims surrounding the integrity of the presidential election.

On Nov. 5, as election fraud allegations were reaching a fever pitch, content shared by Eric became increasingly desperate. In another video, Eric seemed to suggest that a ballot counter had engaged in illegal behavior based on the fact that he appeared upset in a live stream video.

The tweet had first been shared by Austin Fletcher, a popular pro-Trump commentator known online as “Fleccas,” to his more than 248,000 followers. Fletcher and an unknown narrator on the clip similarly frame the incident, which shows an election worker crumpling up a piece of paper, as suspicious.

“I wonder what’s going on here. This dude has a fit about something. And then flips off a ballot, and then crumples it up,” the narrator says. “If that’s not voter fraud, I don’t know what is.”

The 34-second clip was watched more than 5 million times, while Eric’s retweet racked up more than 33,000 shares alone.

In the minds of Trump supporters, the vague footage was the latest bombshell evidence proving a nefarious plot against the president. In reality, the clip was just another mundane incident twisted by right-wing Twitter users to fit a narrative.

Fletcher’s video had originated from a live stream put out by USA Today that showed election workers in Atlanta. And where Eric and others appear to insinuate that the man must be ripping up a ballot, the piece of paper was actually an instruction sheet left inside a voter’s ballot envelope.

Fulton County Elections Director Richard Barron pointed out in a statement on Nov. 6 that the man had not engaged in any wrongdoing.

“Voters often include lists of instructions like the one discarded in the primary absentee ballot envelope when submitting their ballots in the mail and or drop boxes,” Barron said.

Barron also noted that the poll worker was merely tasked with separating and cutting open envelopes and that ballot extraction was handled at another station entirely.

“At no time was the worker able to extract the ballot,” the statement continued. “Ballot extraction only occurs with workers assigned to sorting duties.”

The facts didn’t matter to Trump supporters clinging to any perceived example of voter fraud. The election worker was ultimately forced into hiding after receiving a deluge of death threats.

Despite countless election-related conspiracies being thoroughly debunked, the disinformation campaign on behalf of the pro-Trump internet ultimately caused a staggering 83% of Republicans to believe that Biden never won, according to a December Gallup poll.

As notable as Eric’s impact has been in spreading false claims online, the president’s son saw his efforts reach a crescendo on Jan. 6 when he stepped out from behind the keyboard and addressed his father’s supporters in Washington, D.C.

The president’s most ardent loyalists from across the country had descended on the nation’s capital on the misguided belief that Vice President Mike Pence would somehow stop Congress from counting the electoral votes. All because we watched a fraudulent election “play out before our very eyes.”

“Is there any person here that actually thinks that Joe Biden won this election?” Eric asked the crowd. “I don’t either, guys. I don’t either.”

Eric went on to once again accuse his father’s political foes of stealing the election, cementing the weeks-long narrative that would lead to bloodshed not long after.

“They can lie, they can cheat, they can steal,” he said. “My father has started a movement and this movement will never ever die.” He may be right. The Trumps created a world where an entirely alternate reality can be lived by passionate believers consuming whatever false claim is served into their computer screen.

Exactly what Eric Trump is perfect at doing.