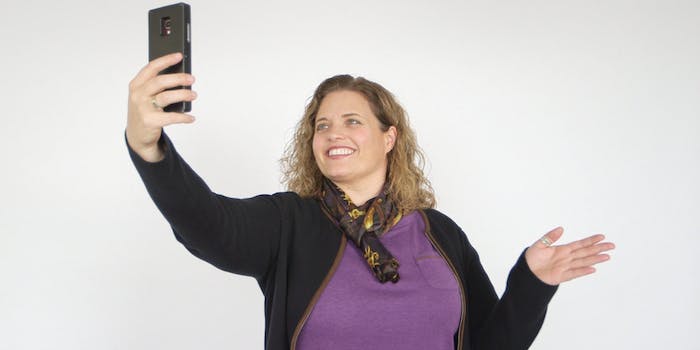 This technology will completely change the way you take selfies

Put your selfie sticks away.

Selfies are serious business, and in lieu of having an extra-long limb capable of hitting the right angle, there have been many innovations released in the recent past that aim to help you get the shot. A company called Elliptic Labs wants to make the selfie endeavor an even simpler one: Imagine taking your photo without having to touch your phone. You just have to wave at it.

Making its debut in this week’s Mobile World Congress, “Ultra-far, Ultra-fast Interaction” is a new ultrasound technology that lets users give a split-second response via touchless gesturing to a compatible device. With a simple wave or ‘”air double-tap” anywhere in front of the lens, you can trigger your camera. You can even take a group photo from as far as seven feet away.

While there are obvious other use cases here (mobile gaming comes to mind), Elliptic Labs is focusing on selling its selfie appeal, for good reason: According to the company, selfies account for 90 percent of all phone photos now.

“Besides its performance advantages, our ultrasonic touchless gesturing approach has been designed to adapt to the way humans live and interact with devices, making it easier and more intuitive to navigate and retrieve information from mobile devices,” says Elliptic Labs CEO Laila Danielsen. “Users get immediate feedback on how phones, wearables, and other devices have responded to gestures. This technology first is an excellent example of a capability that, once you have it, you can’t live without it.”

Sadly, you can’t just go and pick up some touchless gesture control for your phone. “In theory, it is possible for a consumer to download our software and use it for gestures,” Danielsen explains. “However, our go-to market strategy is to work directly with the original equipment manufacturers and have them integrate into their phone, making gestures available to the consumer.” Elliptic Labs is in talks with a number of smartphone companies and confirms that the technology will be available to customers later this year.