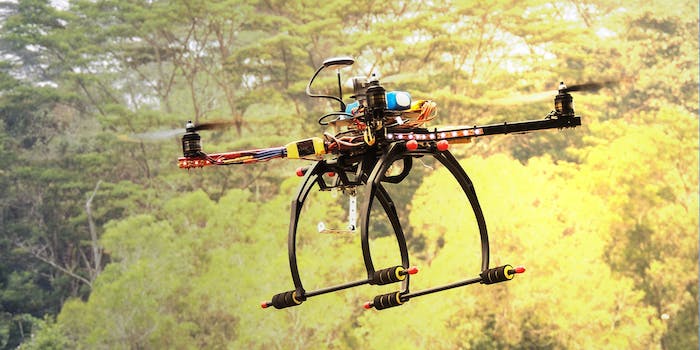 Drone users will have to register with the U.S. government

Drones are moving out of the hands of the people.

Drone owners: These are your final days of being able to freely roam the friendly skies.

As first reported by NBC News on Friday, the U.S. Department of Transportation is cracking down on drones by announcing a new regulatory task force. On Monday, the DOT will announce plans to make drone users register their devices—and the new rules are expected to be firmly in place by Christmas.

Drones have been pretty much unregulated until now—and DOT reps said the free-for-all has caused some near misses with aircraft that drones came dangerously close to colliding into. In August, the Federal Aviation Administration (FAA) reported that pilots had seen drones in their flight paths at rates more than triple the previous year. In all of 2014, pilots saw 238 drones come close to planes; between January and August 2015, pilots had close calls with over 650 drones.

The FAA has been desperately trying to enforce regulations on drones in public airspace since 2007. But several attempts at banning or outlawing the small crafts fell short due to court rulings.

At the same time that the DOT is tightening public regulations on private drone ownership, drone use is increasing among police and military units. This week, documents leaked to The Intercept showed that the U.S. military has increasingly relied on drone warfare in the Middle East, including bombing a hospital full of Doctors Without Borders volunteers—an airstrike that killed 22 people and caused the medical relief nonprofit to flee the area.

The U.S. has killed 2,476-3,989 people with weaponized drones in Pakistan alone, according to the Bureau of Investigative Journalism. Those numbers increase when Yemen, Somalia, and Afghanistan are added to the mix—and the numbers seem to increase each year.

With companies like Amazon working to incorporate drones into their delivery methods, it appears they are losing footing as an egalitarian tool for hobbyists and photographers. The drones of the future are tech that belongs to the realm of law enforcement, the military, and massive corporations.