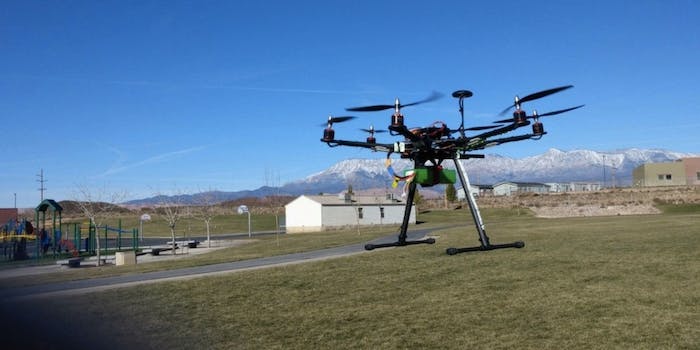 The drones are going down, down.

If you want to take down a drone, all you need is something you can’t see.

Researchers at the Korea Advanced Institute of Science and Technology (KAIST) in Daejon, South Korea found that sound waves can knock a drone out of the air if applied correctly.

The vulnerability is all due to resonance, a natural property of all objects. Researchers focused on the gyroscope component of drones, which keeps it balanced in the air. While some gyroscopes have been developed at frequencies above the audible spectrum, many are not, and those are the vulnerable ones. For their first tests, they team attached a speaker to the drone. It took off normally, but crashed as soon as they played sounds at the resonant frequency.

They moved on to testing how to direct sounds at drone from afar, although admittedly they said they couldn’t build the kind of tracking systems a major weapons manufacturer could. Still, some of their tests at attacking the drones with sound from a distance had limited success. Their biggest problems were tracking the drone’s movement to effectively aim the sound. ComputerWorld points out that there are some sound-related devices on the market that, when combined with tracking radar, could increase viability on these sorts of drone attacks.

The defense against these attacks? According to the researchers, simple shielding or foam still prevent the gyroscope interferences.

The paper detailing their findings will be presented in Washington, D.C. at next week’s 24th USENIX Security Symposium.